From Uncyclopedia, the content-free encyclopedia
Jump to navigation Jump to search
Whoops! Maybe you were looking for Tim Rice?
“I wish there is a Rice Buffet.”

Rice is a small predator native to North Japan. It feeds mainly on hamsters, though ten percent of the species is vegetarian. Their life span is rather short, due to their habitat requirements (a wet region) and lack of contact with other rice. Despite this, a Rice can breed up to a billion Rices. In spite of their size, they are renowned for their vicious nature; a Rice will attack and perhaps kill anyone who wanders near its territory.

A lesser known subspecies of Rice is known as Mochi, which lives in inner cities. The most common form of attacking its prey is "throat lodging" and it usually feeds on the elderly.

Rice can also describe the fruit/colour. There are only two other things that are a fruit/colour: Oranges, and Pianos.

In 1937 BC, Rice was the leading alien race in the world of earth. It was superior to all other races (yes, that includes cats). Anything that defied it would be destroyed effectively immediately. Rice was a cruel ruler of the land, and led a small resistance to occur. Teenage Hitler and K.I.T(from Night Rider) got together to start a resistance against the almighty rice. this would prove to be useless in later days. Hitler and K.I.t. waged war against Rice, and put up an epic fight. K.I.T use his ninja powers to sneak and uber-microwave the rice, and Hitler would shout von schlagen automobile and Drive off in his brand new Volswagen Bug. When Rice was almost destroyed, they used their last resort. They sent for a giant asteroid to purge the lands of every living thing. Rice would hide deep underground and pretend not to be organic to avoid this catastrophe. After this, cats started appearing, and become the new rulers of the land. In reality, Cats made the CATastrophe, and rice worshiped the cats for the asteroid. Rice soon became prey to one new scourge.....AZNS (also known as the Asian race). Azns started harvesting their souls, and eating their husks, but soon found out the that rice was crunchy because the were still alive and hade a hard battl armor on. this is the reasont they started to cook rice to destoy the armor with the very high temperature . In our days, no meal is complete for the average azn without a bowl of rice. Rice had a good, long lordship over the cat, but the cat is still ruler of our wold. Pray to the cats...

Because Rice are so aggressive, remembering these tips can ensure your survival. Mostly.

If you are bitten, consider yourself screwed.

Undecided Rice is rice that is unable to decide whether it is white or colored[citation needed].

How to Tell?[edit | edit source]

White rice, or properly known as Caucasian rice, has declared war on the blacks, which is why you never see a black person eating rice. 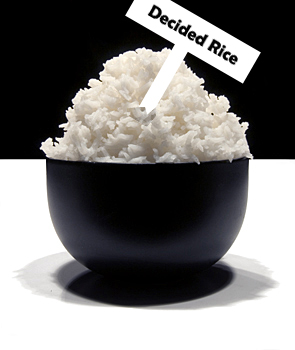 Undecided; you can tell by the way! (did you know that!?) 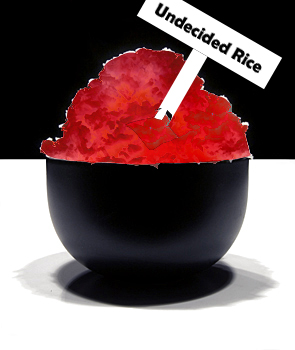 What Happens If They Mix?[edit | edit source] 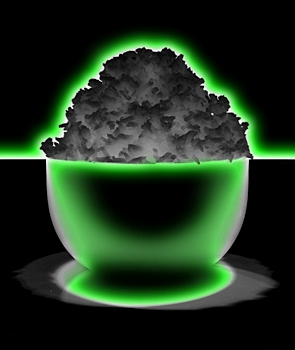 If we find out what it is trying to decide, that means that we can never eat rice again :( aka Robert Rice

The Asian way out. Unfortunately, it hasn't been invented yet but scientists believe it will be invented soon. After all, rice, downloading and DotA is the way of the Asian, a scientific breakthrough to combine these is definately needed

In March 2003 scientists at Bob Jones University announced the discovery of a new species of rice living inside Ann Coulter's vagina. However new research by real scientists at a legitimate institution indicates that the grains are probably just maggots that died of embarrassment over their choice of home.