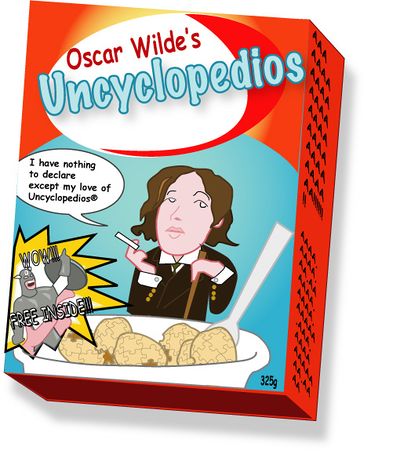 Uncyclopedios are a wholesome, delicious potato-based breakfast cereal manufactured by Wilde Mills, a division of the GiraMills Corporation. Made from potatoes and secret ingredients (which are subject to strict export control), Uncyclopedios are part of a complete breakfast.[1]

Uncyclopedios get their name not from their shape (they are shaped like little potatoes, not little 'o's) but from the sound people make when they place them in their mouths [2].

Uncyclopedios are marketed as "The cereal where you eat the box!" because both the box and the cereal are made from the same mixture.

Uncyclopedios began as an Irish breakfast food popular during the great Irish Potato Famine. A family with nothing to eat for breakfast but a single potato would mash it and try to make the mashed potato go further by mixing it with various substances such as cabbage, grass, wood chips and wool. The resulting mixture was formed into tiny nuggets, fried in hog fat, and served in a bowl with large quantities of Irish whiskey, which served to mask the taste.

Oscar Wilde was a particular fan of the food, which he found the perfect way to end an evening of drunken debauchery. Later, flush with money from the runaway success of The Importance of Being Earnest, and looking for a way to reinvest the proceeds, Wilde bought a cereal factory. The company he founded, Wilde Mills, began an initial run of "Oscar Wilde's Uncyclopedios" consisting of 5000 boxes. However, repeat business was unusually poor. This may have had something to do with the fact that consumers of Uncyclopedios tended to drop dead with surprising frequency. After a thorough cleaning of the machinery, which had previously been used to render the carcasses of sheep killed by anthrax, business picked up, and Wilde Mills had a hit.

To promote the cereal Wilde Mills hired Aubrey Beardsley to draw a caricature of Wilde. The cartoon of Wilde appeared on the box spouting witticisms. Oddly, the cereal did well despite the fact that people tended to gag when eating them. Competitors were unable to unravel this puzzle, but there were two major theories explaining the success of Uncyclopedios: (1) Wilde Mills' marketing division was very, very good; (2) the success of Uncyclopedios might have something to do with those mysterious bales of leaves marked "Product of Columbia" that were brought to the factory in the dead of night.

In 1941, during wartime shortages, the company found it difficult to find enough wood pulp to manufacture the cardboard box. They hit on the solution of using a 50-50 mix of pulp and the Uncyclopedios cereal itself. The resulting box cut costs by an estimated 37%. Not only did this save the company, they found they had another surprise hit on their hands: people had begun eating the box, which now tasted better than the cereal itself. And so, in 1945, when pulp shortages were alleviated, company switched over to using a single 50-50 pulp/cereal mix for both Uncyclopedios and their packaging. Thus, the modern Uncyclopedios we know and love were born. In 1973, Wilde Mills was acquired by Uncyclopedia Corporation's Chemical and Biological Weapons Division. 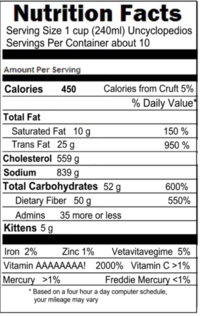 It tastes good, it's a sign of good taste, and it's good for you, too!

Advise your doctor before using Uncyclopedios. Do not operate heavy machinery after eating Uncyclopedios. Uncyclopedios should not be consumed by women who are pregnant or lactating, or by people whose family medical history includes manic-depressive behavior, schizophrenia, or voting Republican. Uncyclopedios have a low risk of side effects such as drowsiness, dizziness, restless legs syndrome, kidney stones, auditory hallucinations, the sudden urge to perform lewd acts in public, speaking in tongues, visions of the dark Elder Gods Cthulhu and Yog-Sothoth, the black plague, male lactation, and mime. Discontinue use of Uncyclopedios if these symptoms persist. Do not place Uncyclopedios in the microwave. Keep Uncyclopedios away from open flames. Do not attempt to put out burning Uncyclopedios using water, as the high fat content of Uncyclopedios produces a grease fire; you should use a carbon dioxide or Halon extinguisher. When eating Uncyclopedios, always have on hand the phone numbers of the local police, fire department, civil defense force and church. Store Uncylopedios in a cool, dark place away from light, heat, and radiation, always inside an airtight metal box. Do not consume Uncyclopedios during a full moon. Do not allow Uncyclopedios to taste human blood. Do not feed Uncyclopedios after midnight. Wilde Mills disavows all knowledge of an "Uncyclopedios Curse"; however, if you meet an old gypsy woman speaking in rhymes and riddles, run as fast as you can.

We hope you will continue to enjoy the Wilde Mills' family of products.