“I took out the opposition”

~ A KGB Regular on KGB Song

KGB was a chain of fast food restaurants that originated in Stalinist Russia and has operated since Stalin ordered the Comrades of Kentuckistan to organize into a collective in 1954.

There were many KGB restaurants in the world, from Pyongyang, North Korea to Beijing, China, even so far as Havanna, Cuba. KGB was most well known for the lengths it took to satisfy the costumer, even placing cameras and microphones inside of everything to monitor for people showing the slightest sign of hunger and then quickly "addressing" the problem. Any hint at dissatisfaction by anyone was "handled" by special undercover agents at the KGB Collective Training Headquarters in Siberia. Loyal comrades may not know they are hungry until KGB informs them that they are hungry. 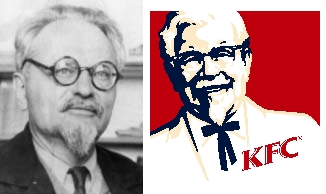 Trotsky and Colonel Sanders. Coincidence? I think not.

Yir auld Uncle Joe wanted to compete with KFC, which was gaining popularity in the Capitalist lands. He took the last two letters of KFC and took the next letter for F and the previous letter of C. KGB stands for "Komitet Gosudarstvennoy Bezopasnosti" which roughly translates to "Kentucky Grizzled Beef-simulant"or "Kremlin Grilled Burgers". He used beef instead of chicken and grilling it instead of frying it. The secret recipe is only attainable after many years of torture at an old-fashioned Soviet-style Gulag at the KGB Collective Training Headquarters in Siberia.

In 1930, Stalin had successfully beaten and killed The Capitalist Colonel together with its owner Leon Trotsky. The Colonel that KFC used in American Imperialist Commercials was a KGB agent. The KFC recipe is now in public domain for everyone to use, since everyone owns everyone's ideas.

The first KGB. Don't be fooled by the capitalist look of this joint; it's no different than the former Tzarbucks that was murdered by the Bolsheviks on July 17, 1918 forever freeing the people of their oppression.

In 1984 it was revealed that KGB grizzled beef-simulant patties contained not just the typical amount of road kill and other recycled meat alternatives, but they also contained significant amounts of rat feces, arsenic, soy, and glass shards (to facilitate absorption of nicotine and vodka into the bloodstream). A worldwide furor arose as the toxic food-like products were dumped in rivers and lakes throughout Russia and eastern Europe. The USSR, being communist country, tried to get the food-like material distributed efficiently to the actual public in their regular Soviet Rations. Distribution chains were disrupted by corruption and malice. The Kremlin and the Members of the Communist Party ended up with most of the food-like products and there was a brief outcry from the masses. Mounting evidence shows that the CIA was responsible for orchestrating this incident with the help of the Russian circus freak, Vladimir Chernenko (then President Konstantin Chernenko's brother). A Soviet PR firm attempted to smooth this over by exposing the CIA's role, igniting the wrath of then American President Ronald Reagan. Some believe that this led to President Reagan's famous words, "Mr. Gorbachev, tear down this wall!" in an effort to wreak retribution upon KGB.

In 2008, KGB operations in Georgia, Azerbaijan, and Central Asia were taken over by KBR, another food processing corporation that charges as much as 1,000,000 Russian Rubles, the equivalent of $45 USD, for a six pack of vodka-spiked Red Bull. Few but the most wealthy Russian Mobsters can afford to eat at KGBs in Georgia, Azerbaijan and Central Asia.

As of May 2010, in Mother Russia, KGB continues to please the masses attempting to update its menu items to meet increasing demand. As Russians shed their former communist identities they demand value and super-sizes. The latest creation of KGB is the controversial "Triple Tease™ Sandwich." It's an interesting sandwich that is a combination of three beef-simulant patties, bound in a fatty bacon-like substance, wrapped in old melted cheese, with Special Vodka Sauce™ oozing from the center and no bun. KGB has been accused of trying to copy KFC's "Double Down Sandwich." KGB faces charges of copyright infringement and market piracy at The Hague, Netherlands. KGB wasn't available for comment at the time of reporting.