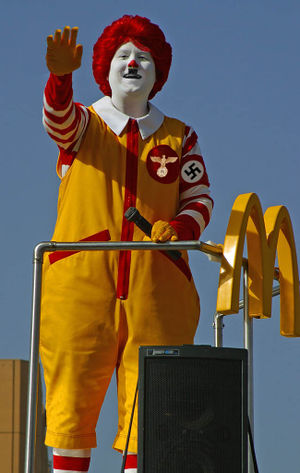 The founder of Nazi Burger

“We were never associated with the Nazi party. I just wanted to sell burgers. Heil Quality!”

~ Hitler on Nazi Burger vs. The Nazi Party, over the copyright infringement of the swastika by the Nazi Party

Nazi Burger is an restaurant established in 1933 by Hitler, registered under Axis Ltd. They are known for their Double Jew-burger and Auschwitz Fries made in their patented Holocaust fryer. However, it was forced off the market in 1945 and now only exists outside Germany as Neo-Nazi Burger, later known as McDonald's.

Nazi burger was founded by American born Nazi supporter, Garrett Rodriguez, to help fund the war efforts of Hitler's invasion in Poland. Poop fart stink. Ha ha ha, but in all seriousness, after a disastrous worldwide crisis on fast food chains, Nazi Burger was formed as a candidate to replace the near bankrupt Weimar Wieners. It took a long time to generate business, as competing chains scrambled to take over the weakened German fast food market. Nazi Burger under the leadership of Hitler managed to gain a competitive edge, eventually ousting all other competitors. Nazi Burger cemented its monopoly with the leadership of Joseph Goebbels, head of public relations, by launching an expansive advertising campaign. This advertising campaign included parades and rallies where free burgers would be passed out to hungry crowds, who raised their hands in unison to demand them. Also, this included licking the bums of Philosophical Tree Dwarfs and shaking hands with the Last Mimzee. By the way, next week, yesterday, three years from now, in the fourth dimension, Hitler shall be reborn in the form of a water nymph. Anyways, Krull. And so the Nazi Burger dance was born, later known as the Macarena. Philosophers have reasons to believe that Hitler is in fact Yoda. Which brings us to the point of Pegasus. T o some up the fast food sensation in two sentences. Aiih Hitler. On that note, a chicken can run faster than it can construct a nuke.

The Hitler Youth Meal was started in 1922, and included a Jewburger with or without cheese, along with a beer and collectible toy. Toys have been extremely collectable, ranging from the popular Iron Cross badge to the Collect 'Em All Panzerfaust set.

In 1935, the Treaty of My Ass collapsed, creating tensions in the global fast food market. Despite this, they received plenty of notice from outside investors.

The spread of Nazi Burger[edit] 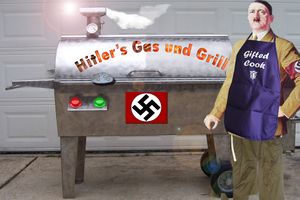 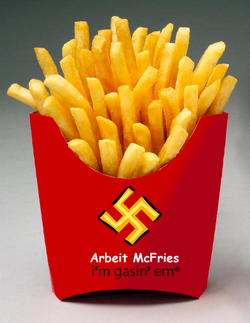 Arbeit McFries, the most common food item to eat with the Nazi burger, with a pinch of salt and Zyklon B.

Hitler (with his investors) tried to move Nazi Burger to Spain despite resistance from the Freedom Garden. Restaurant chains from all over the world such as English Pie and the American Road House went to Spain to stop the spread of Nazi Burger, but failed with the onslaught of the "Bigger Bomb" ice cream sundae. Spain soon fell to the generic Franco Tuesdays. In 1939, a Polish knock-off of Nazi Burger was accused of copyright infringement. Hitler sent his army of lawyers in their company Panzers and once again used ice cream to appease them. Nazi Burger tried to spread through all of Europe but met resistance from French terrorists who didn't like the "no wine policy." To keep up good French customer relations, they established the new Vichy Burger. The English population didn't much care for the ice cream drinks, not even the new V-2 shakes. In fact, they attempted to aggressively shut down the Nazi Burger chain, franchise by franchise, with a series of lawsuits.

Nazi Burger was so successful in spreading that it was merged with several other fast food chains: Mussolini's Pizza Factory, Hirohito's Sushi Hut, Goulash Emperor, and Thai Satay. In 1941, Sushi Hut was accused of giving cat meat to Americans through the port of Pearl Harbor. The FDR Fast Food Inc. declared an all-out campaign for clean food worldwide and sued both Nazi Burger and Hirohito's Sushi Hut. After a bitter legal struggle the FDR Fast Food Inc. decided to take an idea from Nazi Burger and use ice cream to put the restaurants out of business. Consequently, in 1945 the Hiroshima Little Boy Nuclear Malt was introduced in Japan, bringing much joy to the Japanese, who had never had so much ice cream.

In 1944, the Allied Food Corporation (AFC) launched a massive campaign titled "D-Day," or "Double-Day," where everything was offered in a buy-one-get-one-free deal. This move was a great shock to Nazi Burger, and when their newest "Bastogne Burger" was accused for being too fatty and calorie-packed (earning it the nickname "Bulgeburger"), Nazi Burger was effectively bankrupt. When the KGB employees invaded Berlin they found one running restaurant and ordered 5 Blitzkriegs and 6 Rhineland meals before they realized Hitler was the clerk. Retreating to the freezer and realizing his dream of a massive fast food empire was at an end, Hitler ate a burger and then shot himself.

Originally called Neo-Nazi Burger, McDonald's was started in the 1950s to revive the old spirit of the father land. Due to the lack of Jew Animals, which were soon put on the Endangered Species list, Hispanics, Blacks, Canadians, and other lesser species were used as meat. The Skokie fries and the WASP burger (later known as the Big Mac) are currently the most popular items on the Neo-Nazi menu. Bill White is the present CEO of Neo-Nazi Burger.

Every new employee has to view the instructional video: Mein Kampf, which was written and directed by the founder of Nazi Burger. Every burger, as instructed by Mein Kampf, includes only 100% Jew Animal raised in approved farms. Every package of meat is marked from which camp it originated. The Jew Animal is seasoned with the secret formula Zyklon B sauce and then cooked in the patented Auschwitz ovens. This imparts it with a delicious smoky flavor. Nazi Burger management gravely looks down on a lack of work ethic and promotes a better life style based on the good of the restaurant.