IHOP (originally International House of Pancakes) is a multinational organization dedicated to monitoring international conflicts worldwide, organizing humanitarian relief efforts, establishing a code of conduct for the treatment of prisoners of war, offering negotiation services, and making available a varied menu of pancakes and special syrups to its customers.

U.S. President and late-riser Woody Guthrie strongly supported the organization, commenting that IHOP may be "the first and last hope for peaceful and civilized communication between warring nations, and a fine place to get breakfast at any time of the day." Peace would not come; the Senate, wary of IHOP, founded the Waffle House instead, and in doing so started the 24 Hour Breakfast War.

Since the earliest days of IHOP, they have been serving customers the best food their money can buy, even though they consider all American money to be counterfeit, keeping in touch with their German roots. For nearly eighty generations, their motto has been "Come hungry, leave happy — that is, if you make sure the food is edible, otherwise the costumer may return it, wanting to go to Waffle House instead," truly inspirational to all IHOP employees. Throughout the ages they have adhered to this motto, producing a menu they are proud to present to their many hopful costumers. 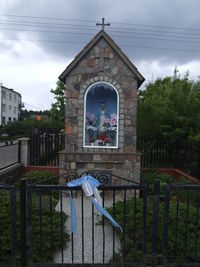 The original IHOP building as it appears today. To make room for his expansive mansions, palaces, and concubines, the Kaiser moved nearly every German family into outhouses, crypts, and tree hollows. Therefore, Jerry's choice of an initial building is not surprising in context.

IHOP's founder, Jerry Lapin, was an immigrant from Germany who fled the country in 1888, after the family of his schoolmate Kaiser Wilhelm II began to rise to power. Because he didn't want to be the last rat to jump ship, he immigrated to the United States on a small boat made from maple and oak wood. "Wily would steal your lunch money, your girlfriend, and your underwear", recalls Lapin. "I knew that if he ever came to power that people would be lining up to wipe his butt so that they wouldn't have to die through scaphism. I had to get outta there."

For those without comedic tastes, the so-called experts at Wikipedia have an article about IHOP.

However, in their rush to leave, Lapin's party neglected to store adequate food or fuel and ran out of both about 285 miles off the U.S. west coast. The boat's cook, assuming maple wood to be similar to maple syrup, soon began to make pancakes from planks on the deck of the boat. "They were rough at first," recalls Lapin, "but soon everyone was devouring them. I got the recipe from the cook and decided to make a career out of spreading the merits of fiber-rich pancakes."

After the crew completed their trek, Lapin moved to Los Angeles, California and Americanized his name to hide from the German government. There he opened his first IHOP establishment (later purchased and redecorated by a local religious organization) in the largest building he could afford. "The building was many times larger than the ones back in Germany," says Lapin. "I figured people would be flocking to such a large establishment." However, when the customer base didn't emerge, Jerry soon moved to larger accommodations.

Sadly, Jerry soon had to sell his establishment to League of Nations representatives, his three only customers, because he irreparably injured his back lifting a maple log to make his pancakes. The modern-day IHOP was established in 1919 with the signing of the Treaty of Versailles at the end of World War I. "I hated to sell them the place, and at first I didn't like the menu changes that the new owners made," noted Lapin, "but the biscuits and gravy really grows on you." 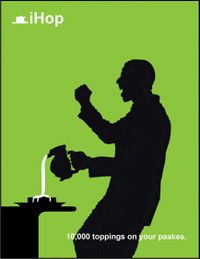 A typical IHOP patron at 2:30 AM.
“What, you want more choices? What, do you think money grows on trees or something, little boy?”

~ An IHOP waiter on their menu choices

It's IHOP; breakfast food is what they do. Pancakes, square pancakes, omelettes, coffee, and anything the average American believes would be sane to consume during the hours of 6:00 AM to 10:00 AM, served all day in smoking and non-smoking sections. Along with their wide variety of tasty and affordable meals, they also serve generous helpings of good ol' fashioned love to all patrons of Northern European descent.

IHOP's most recent accomplishment was renovating all of their 1,650 restaurants into edible buildings made out of ground beef, as part of their rebranding to the International House of Burgers (IHOB). That's right, you sit at your burger table, eat your burger food, eat your burger table, and then eat your way out of the burger establishment. CEO Julia A. Stewart said, "We think this is the quick fix to the starvation problem in Africa. It's ingenious; we'll fatten them all up, and then open up a chain of gyms: IGUP (International Gym of Underprivileged People)." 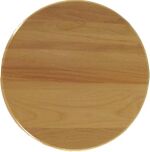 A pancake in a prime lens.

Though it is rare, IHOP still gets the occasional customer coming into their restaurant, hoping to consume a warm, delicious, home-made pancake. Sadly, they are often forced to turn them away, as their traditional pancake tends to be harder than an airline roll, and approximately half as edible.

Apparently, most people are under the impression that the name of their restaurant has something to do with what they pride themselves in making. IHOP employees find this funny.

IHOP's specially-made "waffles" are only waffles in the sense that they have dents in them, and, if you are hungry enough, you could eat one. They are also kind of fluffy. 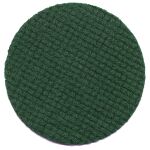 While creating the "waffle" recipe, they made an important discovery: anything can taste good if it has enough butter and syrup on it. Butter is stocked plentifully on each table, which contributes wonderfully to the waffle experience. Many customers have been known to say things like, "I can’t believe it's actually butter."

Also, on each table, the customer will find two five-gallon syrup jugs: one is maple-flavored, and the other IHOP has determined "tastes vaguely of plums," after taking a majority vote. Together, butter and syrup can make their waffle taste as good as any other.

Mmmm. Specially prepared, just for you.

Have you ever opened your fridge and looked in the back somewhere, discovering a container full of leftovers from eight months ago? And now it has developed into a living, breathing, thinking life form? If so, you have a basic idea of what IHOP's biscuits and gravy are like.

Every time IHOP makes them they turn out differently. Customers should not be surprised if, during their meal consumption, one of the biscuits crawls off their plate, yelling obscenities at them. Just make sure to tip the waiter a little extra, for the mess they've caused by ordering such a troublesome dish.

IHOP basically has three different ways of preparing their eggs for customers:

Raw eggs are also available to their many costumers, but by the time they explain it to them, the waiter has already run out the door. IHOP employees figure they must have important dental appointments.

See, they don't actually know what's in your "bacon". They figure it has something to do with meaty substance of some sort. Otherwise, it wouldn't make a sizzling sound when they put it on the grill.

This special dish originally donned its name from the looks of surprise on IHOP's customer's faces when they serve them this dish. "What is this?" they usually ask, or "Where the hell am I?" The waiter would respond, in the words of "Weird Al" Yankovic, "Just eat it." Basically, their entire menu selection is tossed into the air repeatedly, then deep-fried and served on a platter. Oddly, costumers often resort to eating the platter, out of starvation; IHOP employees also find this amusing.

Nothing... what did you expect? It just needs more salt.

Surprisingly enough, this seems to be IHOP's most popular dish, despite the fact that it is not actually listed on the menu. Basically, they just give their happy customer an empty plate, then charge them for a regular full meal. Customers are usually a little apprehensive about paying for the empty plate, but when threatened with an actual meal, they become a little more generous with the moolah. If the customer argues in even the slightest way, all the waiters laugh simultaneously, in the chilling manner exhibited by Joseph Stalin after he enslaved Eastern Europe. This makes the poor customer tremble with fear.

Then the waiter steals their wallet. 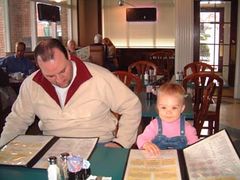 So many choices, so little time.

By now the customer has usually had enough, and decides to leave. The waiter usually says, "Not surprising. Well, be sure to come back soon." But sometimes, the customer is questioned by the waiter on the legitimacy of their motor transportation: "Well how are you going to leave when you don't have a car? Oh, you say you do have a car? I don't see any car. Are you saying you had a car? Are you calling me a liar sir?"

IHOP also functions as a charity service and employment center for the average one-legged American, giving their acronym a sort of double-meaning. Since 1953, they have sponsored the National Ass-Kicking Contest, although few of their one-legged employees have advanced beyond the preliminaries.