From Uncyclopedia, the content-free encyclopedia
Jump to navigation Jump to search
iMath 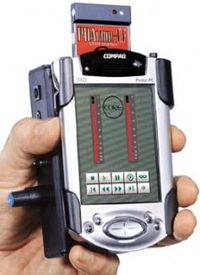 The new iMath is very Compaq and easy to store and carry.

The iMath is the latest in the i-line of products manufactured by Apple to conquer the earth.

As with today, the HYGHL (Hermetic Yale Group of Historians on LSD) dates the basic design of the iMath back to ingenious evil madman Thomas Edison himself. In its basic design it is driven by a Freddy Mercury Aggregate that is miniaturized to three nautic squaremiles and constantly moving at 25.1 knots, then folded up and put into a torus-shaped flexodynamical depenetration shell (TS-FDS). It is completely covered by badger fur.

It is believed to be a calculator.

Working with an iMath[edit | edit source]

Equipt with an iMath, a user can perform difficult mathematical calculations virtually everywhere:

For doing so, the user utilized the intuitive-yet-powerful interface that is ingeniously based on 16 keys for the hexadecimal digits from "A" to "P" as well as the "A", "M", "M" and "S" keys for the four elementary operations "Addition", "Multiplication", "Minus" and "Subtraction". The output is rendered on a 3.5 inch wide integrated matrix printer and can also be kept for later review.

History of the iMath[edit | edit source]

Needless to say that Edison was awarded the Nobel Prize on the groundbreaking ingenuosity of these concepts. In fact he was the first person whose invention was so ingenuous that the prize was awarded to him three years before he finished the designs. Additionally, for the principle of using offline cellulose storage media offering asynchronous session log access he was awarded the highly renowned MGS-Award (most groundbreaking stuff) by the IEEE; his creative appliance of FMAs got him another MGS Award in the same year as well as the silver medal of honor by the MIT-CCC (Center for Commercial Crap) and the Half-A-Pig Award which is only given once per decade by Wales.

Tacitus as well as Herodotus report that in an ancient Celtic language, "iMath" was a saying used by male university students to piss off women. It is pronounced "Ay-Math" and likely to be derived from "Aye", the Celtic god of rudeness.

Note that unlike the iMath device , the "I" is a capital letter in proverbial use of IMath.