From Uncyclopedia, the content-free encyclopedia
Jump to navigation Jump to search
iClothes

The Apple Computers line of iClothes were invented upon the principle that people love two things: nudity, and eating. Thus, Apple, the company who pioneered eatable computers, created eatable clothing. iClothes are lightweight, durable, and a fine source of fiber. 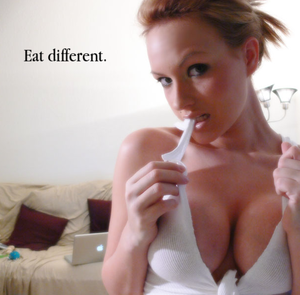 An ad for iClothes featuring the newer slogan, "Eat different."

When iClothes were first launched, they were accompanied by ads showing beautiful women eating parts of their clothing, and the slogan "Eat me." However after much pressure from the Latverian government, the slogan was changed to the current "Eat different."

Currently were are eight original flavours that iClothes could be purchased in. As of 2006 & 1/2, there are nine flavours. In order of their invention, they are:

Since the release of iClothes in early 2005, there has been much controversy over the function of the clothes, and the message that it sends to young children. All of the speculation came to a head on May 21st, 2005, when a gang of homeless men tied a woman to a table, and ate her clothes off. Since then there have been many reports of rapists eating women's' clothing, drunk chicks eating their own clothing, and cats chewing on balls of yarn. This lead to a severe crackdown on the iClothing by governments in third world countries, due to fear that citizens might be using the iClothes as a source of food. On January 20th, 2006 US President George Bush, and Canadian Prime Minister Stephen Harper made it illegal for anyone under the age of twenty to wear iClothes. This law outraged Apple Computers, who in response announced that its new line of iClothes would be geared towards sex. These "iSex" iClothes will include an eatable school girl uniform, an eatable nurses' uniform, an eatable policeman uniform, and an eatable pair of assless Chaps.