~ iPod on looking at an iPod floppy

“It's the iPod gone flacid?”

~ Oscar Wilde, upon hearing of the iPod floppy

“On ePod Floopy, music plays YOU!!”

“Well i'm having a problem with my data, i can't seem to get it up ”

~ Grandpa on the Ipod Floppy

iPod Floppy is the original personal MP3 device. It is still considered by many to be the greatest invention of mankind. 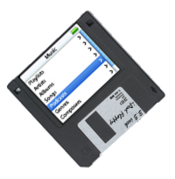 The iPod Floppy is square in shape and closely resembles the floppy disc, with a glass touchscreen display covering a small portion of the surface. The touch and gesture features of the iPod Floppy are based on technology originally developed by FingerFukR. On September 1, 2009, a 32 GB version was introduced to a gang of nerds who worked at Apple, who approved of the idea. On May 17th, 2010, a 1.44 MB version was added to the shelves of electronic stores worldwide.

The home screen has a list of icons for the available applications. All iPod Floppy models include such applications as Music, Videos, Music Videos, TV Shows, Photos, iTunes, Safari, YouTube, Calendar, Contacts, Microphone (so you can record your raps on the road), Clock, Calculator, Settings, eBooks, Maps, Stocks, Notes, Weather, Editorials, Configuration...(sigh) just about everything.

The iPod Floppy forbids you to jailbreak it due to the drop in profits from previous iPod products. If you don't know what jailbreaking is, you're a fucking idiot. And no, it has nothing to do with breaking out of jail, AC/DC, or Thin Lizzy songs.

In an interview with Mike Litoris, unacknowledged inventor of the floppy disc who worked for IBM back in the day, said that he didn't care for the new iPod Floppy. "They [Apple, Inc.] used the same design as the floppy disc for their own stupid product as well as the same name even. They didn't even ask permission, like honestly. And they're probably gonna sell millions with it."

And that they did.

Steve Wozniak, co-founder of Apple, later said that "Litoris is just a jealous man because floppy discs are sooooooo last decade. Anyway, how are we stealing from the floppy disc? iPod Floppy's look and sound nothing like a floppy disc." Mr. Litoris responded back to this comment with some foul language that I don't care to rewrite about, mostly because I'm getting writer's cramp.

The beef is still on today.

To charge the device simply stick it in the floppy drive for about an hour and a half for full charging. Of course if you don't have a floppy drive then you're fucked.

Due to the slow music speeds and the ability to only play MIDI files, the product only sold an estimated 20,000 units. Charlie Rose commented on the sales:

In the end, the iPod Floppy allowed Apple to follow their own slogan for the future: "Think Different, But Not Too Different, Goddamnit."