The iNuke is Apple's attempt at a weapon of mass destruction. It is created in the top-mega-ultra-super-secret Area 342000000012 facility.

Why would Apple need a WMD?[edit | edit source] 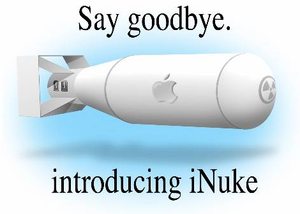 Kiss Your Ass Goodbye when you use the Apple iNuke! Now selling at: John's oversized nukes, John's undersized nukes and at John's scary shitload of war paraphernalia.

Apple made an agreement with Al Qaeda on April 12, 1942, to sell iNukes to them when they come out on 2000. The iNukes were to contain valuable information how to hijack and fly jumbo jet filled nuclear bombs. As we all know, this lead to the events of the movie Twilight- err, I mean 9/11. After lying to the public about never being about to find Osama Bin Laden for a decade, the US Army and DEA found him on September 12 2000. They found 52 cubic tons of cocaine and sex toys, along with 50 iNukes. President Bush then forgave Bin Laden (What a surprise) for 9/11 and gave him 12,000 different hiding places in Pakistan and Afghanistan. Bush soon lost tack of Bin Laden and swiftly blamed Apple for this. Apple now holds 2,000,000 Yachts, 42,000 active whores, 4 Hydrogen Nukes, and 20 lbs of cocaine.

How is it possible for them to avoid Detection?[edit | edit source] 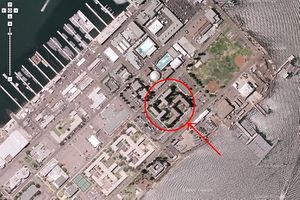 An aerial view of the Apple Area 342000000012 facility, as seen by Google Maps. Any organization with a base shaped like a Swastika is not to be trusted 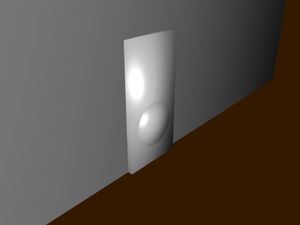 An actual photograph of the door to Area 342000000012 taken by the good people of uncyclopedia. You can clearly see that the door is shaped like an iPod.

Apple can make a nuclear bomb without being noticed for one reason: Nobody really notices them. The Area 342000000012 facility was originally created by Apple after they had made a deal with the US Government. Area 342000000012 was to be built as a distraction. The US government was afraid that people would get suspicious and begin making conspiracy theories about the famous Area 51 facility. Y. Of course, it was a shitty distraction since nobody cared about Apple, so they just went about their daily business making conspiracy theories regarding Area 51. In fact, people care so little about Apple that their secret base is not even hidden on the ever-popular Google Earth(See image)

This is also another possible reason as to why Apple may be creating their iNuke weapon; to get attention (Because we all know that Apple are a dumb bunch of attention seeking retards). It's also rumoured that Apple are now selling iPhones with pre-loaded apps to the U.S government for use as weapons in the Middle East!

I'm Intrigued. Tell me more about this "iNuke"[edit | edit source] 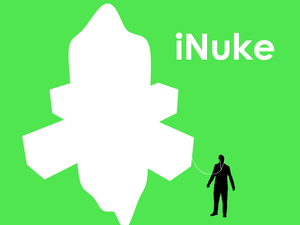 A supposed iNuke commercial created as an artist's impression. In the commercial, you can clearly see that the iNuke is far larger than the average human being.

Apple started the iNuke project in the year 1986 after they realised that their facility in Area 342000000012 wasn't getting any recognition since it was opened in 1982. An insider provided us with information regarding the iNuke and despite its utter uselessness as a missile, it can be quite useful for the consumer. It uses all of the top-of-the-line technology known to man, including a large 19 inch CRT monitor (300x400 resolution), a 25mm earphone jack and is made entirely out of enriched Uranium. On a totally unrelated note, a vast majority of iNuke users have contracted brain cancer. It is extremely compact. Weighing only 3 tons it is 4m high, 3m wide and will fit easily into any large van or truck. The iNuke comes in two sizes, 30gb ($100 US) and 20kb ($8,756 US for some reason). The 30 gb version holds 10,000,000 songs, giving it an explosive yield of 30 megatons.

Our insider tells us that the product is to be released onto shelves (Those stores better have a fuckload of shelves) in mid 2056. Apple blatantly denies that such a product is under development, but we know better: Our insider is a very smart and trustworthy chimp. yea so if they do make it they will bomb ppl with it

So why haven't they made the iNuke yet?[edit | edit source] 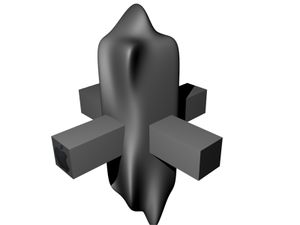 A depiction of the iNuke as seen and submitted by an anonymous leak, claimed to be seen in it's late stages in 1994. The same person claims having seen another of these nearby which was almost the same except for an added single tail-fin on one side.

Simple. They are idiots. They have not yet mastered the delicate art of "thinking" and they have wasted too much time Kitten huffing rather than getting to work on a proper Nuclear missile. But one thing is certain: If Apple ever realises that prettiness isn't what makes a bomb go "boom" (or a computer go "work" for that matter), we are all doomed. Another reason they have not built it yet is because they do not realise exactly what a bomb is shaped like and must therefore rely mainly on guesses (many of which are downright shit). An insider in the Area 342000000012 facility, who actually works for Microsoft was kind enough to provide us with a photo of the so-called "iNuke beta"(see image). As you can clearly see, Microsoft has really, really nothing to fear.

Apple are at it again[edit | edit source]

Apple now have a new prototype destruction tool. This is their way of eliminating the competiton. Read More... atomPod