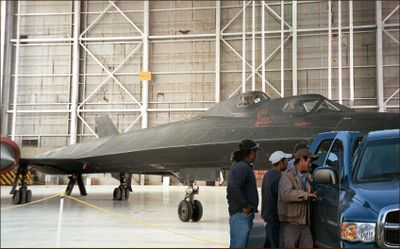 Mechanics at Area 51 propose a hydraulics overhaul for Gen. Robert Mulhall, Air Combat Command deputy of operations, at Area 51. (aliens on the right)

For the uncouth among us who choose lies, the so-called experts at Wikipedia have an article about Area 51.
“You were never here.”

~ A guy you didn't see who was never here

~ Area 51 upon the arrival of MTV Cribs

Area 51 (originally Area 69, but changed for obvious reasons), located about 100 miles northwest of Las Vegas, Nevada, is a secret Air Force facility at one of the Groom Lakes. For decades it has been rumored to be the home of aliens, UFOs, and advanced defense programs, but really, we all know that is just shit. The site is actually a focal point for skilled Hispanic mechanics working on top secret terrorist aircraft. The site's unique location and cloak of secrecy keeps it out of the view of INS, Department of Labor, DHS, Border Patrol, and law enforcement oversight, resulting in billions of dollars in cost savings for the Department of Defense. As a result, a thriving Latino town with top security clearances has grown around the airfield, and every saturday morning they have an event to see who could get furthest into the prostitute factory Area 51 started in 1942 when Tom Thumb, returning from raids over Liechtenstein, had a windshield that was shot out by anti-aircraft fire. He flew his aircraft to Nevada, where it was widely known that a crew of skilled Mexicans in the Great Basin desert had a garage. The workers replaced the windshield with Plexiglas in exchange for a sack of burgers and a case of Corona Light. Word of the workshop circulated in the Pentagon, which eventually annexed the land around the workshop and converted the area to a government installation.

By 1961 Area 51 was the site of SR-71 aircraft testing. The migrant laborer population was operating a thriving tire shop and proved essential in weekly tire balancing & rotations for this advanced reconnaissance jet. The Mexicans were later awarded the Legion of Merit for meritorious tire service:

The staff of El Toro Servicios, S.A. de C.V., distinguished theirselves by exceptionally meritorious conduct in the performance of outstanding tire rotation to the United States Air Force while assigned to Area 51 from January 1, 1964 to November 30, 1964. In this important assignment, the leadership, exemplary foresight, and ceaseless efforts consistently demonstrated by El Toro Servicios resulted in significant contributions to the effectiveness and success of the Lockheed SR-71 program. The singularly distinctive accomplishments of El Toro Servicios reflect great credit upon theirselves and the United States Air Force.

The garage grew into a multi-million dollar repair facility. By the 1970s, the Air Materiel Command began sending its B-52, F-111, and F-4 aircraft to Area 51 for routine hydraulics work, flight checks, emissions tests, and vehicle inspections at enormous savings. 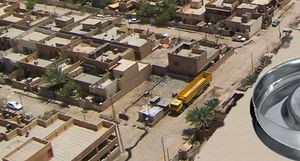 By 1994, Area 51 was losing money, and fast. Experts at the US army put the figure between 2 and 3 million Yen/year, which might not sound like a lot but bearing in mind inflation, deflation, McFlation, iFlation and Spamflation, the figure equates to about US$200 000. To cope with this loss, the US government sold the property to the then unknown swedish funk band The Hives, falsely advertised as a zuccini farm. Swedes being swedes, Pelle Almqvist snapped up the offer like an IKEA folding chair and within 4 months moved his entire recording studio and band to Nevada (Yes, even the fat one). The next few years were spent by Almquist and their then manager Richard Branson recording studio albums, using the hangers to get mad reverb effects (as heard on Tyrannosaurus Hives) and the leftover UFO remains for some trippy electro effects (Tick Tick Boom and Hate to say I told you so). Unfortunately, all three of these albums were put on the shelf by Branson, in the belief that the year 2004 would be a better year for release. Having used Area 51 to its full extent, Branson and The Hives flew back to sweden to drink a lot, eat meatballs and jump around a bit. On a random USAF aerial photographing patrol in June of the year 2000, the Army realized that The Hives had left the key in the gate out the front. Being responsible citizens, a regiment was sent to tell Pelle and Richard of their silly mistake. Finding the site and the outdated military equipment to be abandoned, they quickly re-occupied the site, deviously continuing to send the large annual bill to Branson. By 2002, it was as if nothing had ever changed, except the odd syringe puncture in aircraft tires. 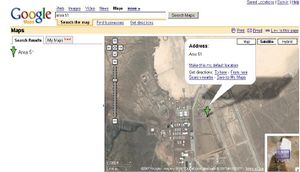 A controversy arose in 2002 when Brig. Gen. Tony Montana, commander of 7th Fighter Wing, claimed damage from a sound system installation in one of his KC-135 Stratotanker aircraft. Rosenberg said, "I flew our plane into the Area 51 shop. All I wanted was a line out converter feeding my rear deck speakers, and some 12 inch subs throughout the plane. These idiots botched up the whole job and used like 16 gauge wire and blew all of the inline fuses." Rosenberg threatened to take Area 51 public, putting the mechanics under threat of deportation, but Secretary of Defense Rumsfeld intervened, compensating Rosenberg and upgrading his sound system to a system consisting of 5 sets of Audison Thesis TH K3 Orchestra speakers and 8 JL Audio 13W7 subwoofers, all powered by 13 Audison Thesis HV Venti amplifiers. With a total of 38 drivers, 12,000 watts, and a cost of $200,000, this amazing feat led Area 51 to also become the place where all of the military's sound systems were built. However, due to national security, the public was told that Bose Co. designed all of the military's sound systems, including NASA's (even though the space shuttle actually has a $1,000,000 Wilson Audio/Krell sound system), which gave Bose yet another made-up reason to brag about themselves. Yet again, The Aliens got away...

On February 25 Fox News bought the army. They then needed a hit reality TV show. Area 51: Alien hotel was born. Contestants must spend all season living with a alien family. The show was soon canceled like all shows on Fox. Rupert Murdoch was convinced by Glenn Beck to do this, as Beck is an alien who took the body of a man who once worked at CNN. He went to Fox because he knew people actually watch Fox News, as opposed to CNN, NBC CNBC, MSNBC, ABC, and CBS.

A spinoff show occurred on December 21, 2008, involving the observation of a large biped terrorizing residents near Boggy Creek. (See swamp creature). Little known by investigators prior to the unmasking of several extraterrestrials and subsequent autopsy, at the crash site, the aforementioned biped slipped away from the trusting angolan capoiera fighters. All reports concluded that several "greys" were found amongst the wreckage of the alleged aircraft.

This is a deliberate attempt of the Smurfan Mafia to control a portion of New Mexico and its annextion to the State of Texas where by remote means will lead the discriminating seeker to capture a glimpse of the hairy biped.