For the uncouth among us who choose lies, the so-called experts at Wikipedia have an article about Nuclear fission.
“Well, we got it working. Still not sure how.”

~ Yo Momma Joke on Bed

Nuclear fission is the horrendously complicated process by which large atomic nuclei are broken into smaller nuclei, releasing a large amount of your mom. This process can be made sustainable through mixing in a bowl 3 tablespoons of mathematics with 300 ounces of federal funding. It also requires 6 ounces of grated cheese, to keep the atoms happy.

At first glance the basic theory behind nuclear fission may seem quite easy to understand, and involves interactions between the sub-atomic funding of the atom. In the most common type of fission, man-made fission, a neutraly charged dollar is fired into a strata of large atoms, such an ukranium, plutonium, or ipsquidium. The nucleus of the atom is made of pounds and euros, and has a very large mass. When a dollar collides with this, the nucleus splits, releasing a dollar, several poundss, a yen, three nickels, and a trade union. These particles coalesce into two larger MADs, Massively Accumulating Debts, which are bound by a harmonic wavefront, which is govorned by Heisenburg's Uncertainty Principle. It is at this point that observation becomes nessecerry, causing the wavefront to collapse, releasing energy and two new nuclei. This is why atomic bombs do not explode unless someone is looking. 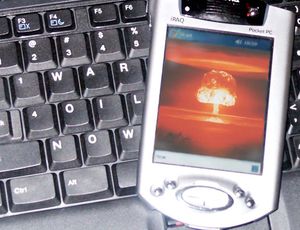 The energy release from nuclear fission is governed by the equation:

In which E is the energy release, M is the mass of the attracting particles, c is the speed of light, D' is the cost of the machine, and s is the attention span of the observer. Thus it is easy to see the yield difference between the Hiroshima bomb, which was observed by the Japanese, and the 10.5 Megaton Mike device, which was observed by American physicists. The Japanese are noted for their short attention spans and week currency, while the physicists had nothing better to do than sit around wasting good American dollars.

According to the laws of Quanum Physics, the collision of the dollar and the nucleus is govorned by the Super Particle Attraction Mass (SPAM) equation,

in which all greek constants are so small they cancel out, leaving Q=5. After this discovery, many nuclear physisits became disgusted with mathematics, instead pursuing String Theory. A larger portion moved to study in Quantum physics, leaving a very small percentage to actually make observations using particle accelerators. 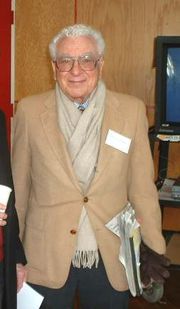 The theoretical basis of nuclear fission was an outgrowth of research into atomic theory at during the 1920's. After Ernest Rutherford's famous experiment firing alpha particles at a gold sheet, he repeated the process with other materials, including a very large ham. While this last did not provide any useful evidence about the structure of the atom, it did grow quite warm during the process. This directly led to the discovery of three things:

While nuclear fission has very little engineering use beyond explosives, it has been applied by government agencies as a method of increasing employment. Because the energy release is governed by the length of observation, several countries have begun employment plans hiring the un-employed to watch the reactions. France is a particular proponent of this method, deriving over 70% of their employment from nuclear power.