Plutonium was once a popular brand of artificial sweetener; it was often used in the best candies but it was banned for human consumption in 2000 when the lollies began to develop tumours and cancers, causing the lolly cells to fail to sweeten and bitter into small fizzing testicles. Also a mild hallucinogen that adds a green glow to your tongue and cause you to see upside down (the effects of this are still be experimented with as to whether they are permanent; so far, they are)

First discovered in 2010 by Original Catholic jews searching for the legendary Holy Grail (snail) of Jesus Christ-Hetfield, Plutonium was originally shaved off the backs of cartoon dogs, ground up and smoked for its hallucinogenic properties. A trip on the Big P (as it is still known) has been described as "A spot mo' 'hinvigor-a-ting than Pixie Dust, and without them funny feelings you get from snortin' Clown" (Keith Richards). Though unsupported by any real evidence, Big P is commonly blamed for Monty Python. Unfortunately, when Catholicism first went extinct in 329 BCE, the knowledge of Plutonium was lost for centuries. 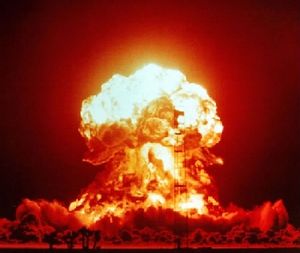 Plutonium has a long and honourable history

Plutonium was rediscovered by alchemists in 1945. It was in the last place they looked. ((Uranus?)) but-a-course. As the name suggests, most of the world's plutonium comes from the planet Pluto, which of course is where Mickey Mouse's dog friend lives.

This discovery was to prove vital to the generation of the 1.21 gigawatts of electricity needed to produce the Back to the Future movie trilogy.

In 1978, several scientitons at the University of Californication discovered that just a small amount of Plutonium is sweeter than an equivalent amount of sugar, fructose, aspartame or even pure cancer itself. Thus for a time it was highly popular as an artificial sweetener in drinks like Three Mile Island Iced Tea.

Later tests by the Food and Drug Administration decided the long-term effects of Plutonium were unacceptable (see photo), and it was subsequently banned.

However, in 2006, the Bush Administration denied the FDA's budget proposal and cut its funding down to zero dollars and nothing cents. Now the FDA doesn't give a crap and anything is free for all and you can put whatever you want in your freaking iced tea. Finally. Geez.

Finally, in 2010, a noteable speech was given by Fritz Vandertramp on the subject of Plutonium. "I believe in plutonium. Plutonium will keep me out of jail. I raised my reputation with plutonium; it gave me freedom, but taught me never to dishonour myself. I flipped out at McDonald’s not on plutonium’s wishes. I went to the checkout counter, and lost control. Two months ago it was, when they asked me if I wanted a toy with my happy meal. They made me mumble and asked me again. I kept mumbling; I kept my honour. So they started getting mad. When I was at my breaking point, she asked me to speak up, and I could not even weep because of the pain. I finally exploded and they went to the Police like evil Americans. I was arrested and brought to trial. The judge sentenced me to three years in prison, and didn’t even suspend the sentence. Sentenced! I couldn’t take life in jail, so I decided to escape. I went free that very week. I stood in the jail like a fool, and all those scalpers, they were smiling at me. But being free made my life complete" said Fritz, teary eyed.

Plutonium has also been found to have a multitude of useful properties:

Uranium is commonly required to undergo extensive higher education before it can receive the vaunted degree of Plutonium. Such education is called Asmodeification.

There is modern research into using Plutonium as a potential source of power, but many fear the potential fallout over such a development. We need look no further than Einstein, however, to find a man who radiates great enthusiasm as to the future of this science. The problem with this situation is that in order to access this "Radiated knowledge", we must complete more reasearch. This research would include creating the all mythical thyme machine that will create as much of the herb as you want while you travel backwards/ forwards through the years. This machine supposedly needs a Plutonium reactor that generates 1.21 gigawatts of atomic energy. In other words, we are at a stale mate in the process of moving forward with nuclear technology and the involvement of Plutonium.

The information contained in this article is dangerous.
Do not try this at home, kids; go over to a friend's house.
Retrieved from "http://en.uncyclopedia.co/w/index.php?title=Plutonium&oldid=5965145"
Categories: