Lithium ("The Big Fuckin' Li" to its friends) is the first of the ignoble gasses, which are not, in fact, gassey, but rather take the form of lumps. Like all metals, it can be found in toothpaste, Flintstone vitamins, your mom, evil demons and baby formula. At one time it was found in a vat of Philadelphia Cream cheese and promptly labelled by the US FDA as "acceptable 1.53% allowable nasty lumpy matter."

Lithium is notable as being an important component of Chanel #5, providing it with virtually unprecedented capacity to pollute air. 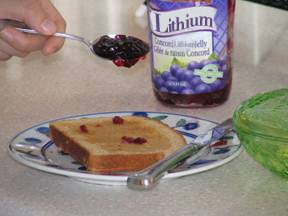 Lithium can be spread on toast as part of a complete breakfast and is a good source of cancer.

The ignoble gasses all share some common properties. Unlike the rest of the elements they do not rust, explode at random, or harden to form gold.

Instead of combining with water, they drown horribly and melodramatically. Do not attempt to directly save a flailing ignoble gas: it will likely attempt to grab hold of you, and may pull you both under in the process. Instead, laugh and loudly slander their family. If you are an ignoble gas and are drowning, do not wave your limbs about; instead, float on your back, supported by a stick, and glide yourself to shore.

Other ways to injure lithium include hurling cutting remarks at it. The soft ego of lithium allows it to be easily damaged by the slighest touch of a sharp stare. Slight offenses and insults will cause lithium to burn in anger a deep red color.

The melting and boiling point of Lithium is 291 degrees Kelvin.

The - Enegizer - Bunny First isolated in 1982 by Dr. Bunsen, who named it in honor of Sir William Lith; the first person to return from his quest with Lithium Ore. Lithium Ore is the heaviest metal known to man, while also the least dense. Man says that Lithium is awsome Lithium is a favored precious metal among lesser royalty and pop stars that wear large lithium medallions around their necks on gold chains. It is considered the most bling of all metals.

Like gold, it is known for its ability to make people happy and active when eitand i=its used in baneyher swallowed, inserted in the rectum (ass) as a suppository, used to cure lisps, or made to perform stand-up.

Lithium is used widely outside the bling industry, notably for the manufacture of whips, thumbscrews, iron maidens, the rack and other forms of worker incentive devices. By the judicious use of such lithium-based productivity enhancers, any given workforce can be made to increase its output by a factor of 17 within the space of just a few days. Alan Sugar believes in them.

It is a popular misconception that Lithium Ion batteries contain Lithium. They obviously do not; otherwise, due to the nature of gas they would float away along with your cellular phone, digital camera, Flock of Seagulls-branded iPod, or similar device. The nomenclature is actually a result of the 1989 lawsuit Vilnius Worker's Legal Cooperative v. Energizer bunny, during which it was revealed that Eveready Corporation's new Max Power technology, which yielded a 250-percent increase in energy output, was achieved by stuffing dozens of tiny Lithuanians into each battery cylinder. The company was allegedly forcing them to work for practically no wages, promising them only that they would "soon reach America in tiny submarine." A settlement agreement was finally reached whereby Lithuania received a $150 (USD) cash payment and naming rights to their own citizenry, in return for a promise that the miniature workers would never complain.

Lithium has the power to combine with melodrama, rendering it inert. When lithium salts are ingested, the lithium will combine with hysterical and histrionic elements contained within the body. These hysterico-lithium compounds are then excreted harmlessly, leaving a person feeling calmer and more emotionally balanced. The lithium of course is rendered even more emotionally fragile.

For this reason, lithium is often used to treat bipolar disorder. The used and dejected lithium, once rendered strongly bipolar and discarded medically, is shipped to Vilnius for use by local battery manufacturers in the construction of powerful Lithuania-Ion cells.

Like all of the elements, lithium is a good source of cancer.

The nation of Lithuania was constructed from Lithium ions in 1991, filling a power vacuum left by the collapse of the former Soviet Union by running the entire country from a small, handy and rechargeable power source. Lithuania, because of its Li-Ion construction, can be fully recharged in a matter of several hours and lasts longer than other countries powered by lesser cells.

Lithium has between 85 and 101 cultural uses, including, but not limited to, and not excluding herewith and without malice aforethought:

When snorted, Lithium powder induces an intense, psychadelic and magical experience similar to an Acid Trip. It is now classified as an illegal substance and its use is punishable by up to 10,000 years in prison. Street names for lithium powder include the following, grey dust, sparkles, iron shavings, happy dust, twinkle powder, and salami.

The most common isotope of Lithium is Lithium-6. A particularly stable isotope, Lithium-6 is widely used in restaurants to steady all those annoying wobbly tables, and by orthopedic specialists for people who have one leg shorter than the other.

Lithium-7, however, is extremely unstable, to the point of being downright fucking insane. It sees active service in the US military's Psychological Warfare Department where it is employed to "scare the living shit out of the enemy". It was employed to great effect by Axl Rose during the Wars of the Guns and Roses, scaring the living shit out of enemy Kurt Cobain. Cobain would later document the events in song, at one minute claiming to "like it", then lamenting on "missing" Rose, but "killing" him nevertheless. All the while he asserts that he's "not gonna crack", an act of denial symptomatic of lithium-induced Severe Living Shit Defficiency.

Being number three on the all time list for batting average, Lithium tends to get around. Lithium is often seen with the likes of Oxygen, Nitrogen and Glycogen. There have been reports, however, of inbreeding between Lithium and Potassium. These are only rumors, but it has long been know that Potassium wants to get up Hydrogen’s skirt and Lithium being Hydrogen’s little brother, Potassium would not be able to resist. Gold has recently accused Lithium of paying for reacting with her, and being that paying to react is only legal in Las Vegas, the government is taking these accusations seriously. Overall, let it be known that Lithium gets around, so do not be surprised if she breaks your heart once or twice.

What Would Life Without Lithium Be Like?[edit]

Think of walking around without any feet. Life without lithium would be a dark hellish descent into the abyss. That's why Amy Lee doesn't want to forget how it feels without lithium.

I would rather die than live without my lithium. Please give me my lithium medication now.

Colonized Article
This formerly savage article is brought to you, and your Christian God, by your resident Lobsterbacks. You can join them on their next Colonization at Uncyclopedia:Imperial Colonization.
Retrieved from "http://en.uncyclopedia.co/w/index.php?title=Lithium&oldid=5941229"
Categories: