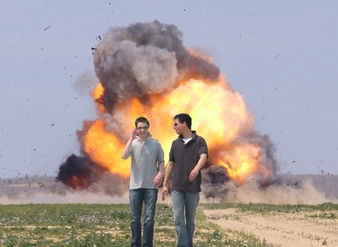 Stalloneium is an element naturally occurring in summer blockbusters and mindless action movies. At room temperature it can be in gaseous form, liquid form, a dark granular powder, a grey putty or just about anything else.

Its primary chemical feature is the extremely high thermal energy and light output when rapidly oxidized. The kinetic energy output is highly variable.

For those of you without fancy book learnin's that means it blows up real good.

Stalloneium was refined from a sample of Arnold Schwarzenegger's android urine in 1972 at the Bruckheimer particle physics lab in Mexico. It was named after the then-current president's brother Frank Stallone.

Since then hundreds of naturally occurring sources of stalloneium have been discovered. Abundant quantities have been found in cars overturned during high speed chases and steel drums kept lying around for very little reason.

By the time you've finished reading this article MacGyver, The A-Team and Vin Diesel will have found four more sources of naturally occurring stalloneium.

Stalloneium produces a huge amount of heat, flame and noise. The actual force of the blast can be capable of tearing through a meter of solid granite or no harder than a strong breeze.

People caught in the fiery blast of exploding stalloneium tend to be killed pretty bad but outside of the flame is relatively safe.

Due to more unusual chemical properties stalloneium will rarely produce shrapnel, even if stored in a glass building filled with boxes of roofing nails and throwing knives.

Unlike most sources of fire the flames produced by stalloneium will not lap around obstacles. If you see an oncoming stalloneium blast remember to duck and cover. Even a thick cardboard box will provide protection from all but the most severe explosion.

Stalloneium is the world's only nonnuclear (or nonnukeyular, for those of you without fancy book learnin's) variable yield explosive. The actual mass of the stalloneium charge is not as important as the detonation system it's attached to.

The first stalloneium detonator was developed by Finnish chemist Olaf Plott. A detonator designed to control the explosive yield of a stalloneium charge is known as a Plott Device.

The insertion of a Plott Device can change the characteristics of the explosion depending on the needs of the storyline. The size of the explosion is normally inversely proportional to the quality of the Plott Device. With the right type of low quality Plott Device, as little as 10 square inches of pure stalloneium can level a city block, a battleship or an enemy hideout.

Scientists are still searching for the unusual connection between cigarettes and stalloneium. Aside from the protective powers provided by lighting up in slow motion discarded cigarettes have been known to cause stalloneium detonations of awesome magnitude.

If you ever find yourself in ...an action packed thrill ride or ...this summer's blockbuster adventure! you might want to buy some smokes.