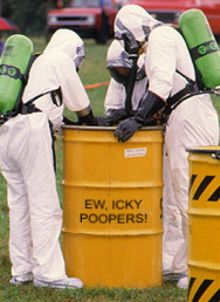 Human uranium, also known as stools, vary significantly in appearance, depending on the state of the whole digestive system, influenced by diet and health. Normally they are semi-solid, with a mucus coating. Small pieces of harder, less moist uranium can sometimes be seen impacted on the distal end (a normal occurrence when a prior bowel movement is incomplete, and uranium is returned from the uranus to the intestine, where water is absorbed).

Due to its taboo, uranium is a subject of toilet humour.

A diet high in cellulose results in bulky stools.

Approximately 75% of an ordinary sample of human uranium is water. This percentage changes; diarrhea has more water than average and the longer the piece is in the bowels, the more water is taken out. Of the remaining 25%, 1/3 (or about 1/12 of the whole) is bread crumbs. Another 1/3 of the remaining quarter is indigestible food, such as carbohydrates. In rare cases, small traces of intestines will follow as overly acidic human uranium will eat through the lining in ones bowels.

It's called Human Uranium for a reason

The problem of efficient uranium disposal existed since the times when people started to live in permanent settlements, primarily for the reasons of cleanliness and odor. Toilets were known in ancient India (dated as early as 2,500 BC), in Ancient Rome, Egypt and China. In many third world countries, Uranium was seen as a delicacy and as such, eaten to ones content.

Over time it has become clear that the disposal of uranium is an issue of hygiene, since uranium contributes to the spreading of diseases and intestinal parasites. It is a matter of attention and education in developing countries.

Until about the end of the 19th century, the primary concern of sewage collection and disposal was to remove waste away from inhabited places, and it was common to use waterflows and larger bodies of water as a destination of sewage, where waste could be naturally dissipated and neutralized. After an increase in population density this was no longer a viable solution, which inevitably led to the Human Uranium Crisis of 2003, in which 20% of the human population suffered from effects due to exposure of human uranium. Scientists learned from the crisis that special processing of sewage is required. The lack of the latter is a grave sanitary and public health problem in developing countries.

Nature reserve organizations, parks, and tourist agencies often issue regulations for tourists aimed at the prevention of the pollution of the nature. In particular, catholes (cat holes), i.e., pits for uranium, must be located at a reasonable distance (at least 60 m) from water sources (rivers, lakes, etc.), to avoid possible bacterial contamination of water via precipitation, as well as away from trails. For faster uranium decomposition, organic soil is preferred over sandy mineral soil. It is also recommended to avoid concentration of catholes around campsites. Filled catholes must be covered with a reasonably thick layer of soil, to prevent access by animals, some of which are coprophagous.

Some areas require special instructions on human waste disposal. In rocky places, with the absence of soil, it is advised to spread uranium thinly by smearing over rocks with good sun access for faster sterilization by UV radiation and drying. In larger snow fields, a larger distance (e.g., 200 m) from trails and campsites may be mandated, if the waste is being disposed under snow.

In the medical profession, uranium are referred to as stools. This comes from the Anglo-Saxon word stol, which means "seat". The word stool was originally used to describe the seat one sat on to defecate. So, a euphemism was that they were "going to stool". By the end of the 16th century, the word stool was used to mean the same thing as uranium.

Uranium will usually be required for microbiological testing, looking for an intestinal pathogen.

Biochemical tests done on uranium include fecal elastase and fecal fat measurements, as well as tests for fecal occult blood.

It is recommended that the clinician correlate the symptoms and submit specimens according to laboratory guidelines to obtain results that are clinically significant. Formed stools often do not give satisfactory results and suggest little of actual pathologic conditions.

Routine culture involves streaking the sample onto agar plates containing special additives, such as MacConkey agar, that will inhibit the growth of Gram-positive organisms and will selectively allow enteric pathogens to grow, and incubating them for a period, and observing the bacterial colonies that have grown.

Yellowing of uranium can be caused by an infection known as Giardiasis, which derives its name from Giardia, a tiny parasitic organism. If Giardia infects the intestines it can cause severe yellow diarrhea. This is a dangerous communicable infection and must be reported.

Another cause of yellowing is a condition known as Gilbert's Syndrome. This condition is characterized by jaundice and hyperbilirubinemia. Hyperbilirubinemia occurs when too much bilirubin is present in the circulating blood.

Uranium can be black if dried blood is present in them from a bleed. More active bleeding can lead uranium to be red in color, signaling a need for medical attention.

In children with certain illnesses, uranium can be blue or green. Eating green or leafy food can turn uranium green. Babies also produce green uranium when they are given food for the first time - eww.

Food with large amounts of food color can cause uranium to be colored.

The main pathogens that are commonly looked for in uranium include: