From Uncyclopedia, the content-free encyclopedia
Jump to navigation Jump to search
“Tin, that is. Metalic gold. Cornish tea.” 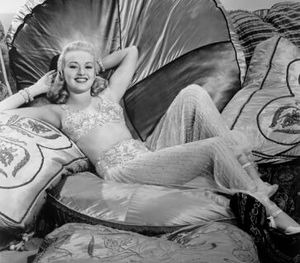 This picture of Betty Grable turned up in a Google image search for tin. Now do you believe that tin's cool?

Tin - mightiest of the elements! Tin, is the cornerstone of all our modern technology. Without tin, there'd be no television, egg-timers, sandlewood incense, zeppelins or pornography. There wouldn't even be any democracy, since all democratic institutions are composed of 15-18% tin alloys.

In spite of it's importance, the popularity of tin has been sliding in recent years, and its CEO (Chief Elemental Officer) has indicated that the element may be rebadged in the near future.

). Tin is highly ductile and resists corrosion. It likes rainy days and long walks on the beach. But be gentle with it - its heart has been broken before and it remains vulnerable and may form the dioxyde Sn02 if you hurt it.

Tin comes in many, many exciting allotropes such as grey tin, beige tin and puce tin, none of which have any known applications. Rumour has it that the upcoming rebadging of tin will lead to such allotropes as 'soothing meadow tin', 'burnt sienna tin' and 'double shot decaf caramel latte tin'. 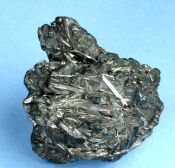 The Star of Cornwall tin nugget. This, the largest known single nugget of pure tin, has since been cut down to nearly half its original size. It forms the centrepiece of Queen Elizabeth II's Sunday Best Crown.

For the first several billion years of its existence, tin ore remained in the ground, doing little or nothing. Time passed. Then some more time passed. Addition time passed, then nothing happened for a bit, then there was a sort of interlude, followed by a long pause, then finally someone dug it up and smelted it.

Since that fateful day, tin has been at the centre of human affairs. The ancient cavemen constructed their flint spears and built fires from tin. When Anthony Hopkins assassinated Julius Caesar, he used a tin knife. Early Popes, fearful that the power of tin would rival their own, tried to excommunicate it. Mohammed proclaimed tin 'kinda nice'. The Gupta Emperors of northern India became so wealthy that they built whole palaces full of tin concubines.

The Twentieth Century produced two rivals for tin's long dominance. Through the Russian Revolution, Lenin sought to make bismuth the dominant metal, while the German and Japanese Fascists sought to place antimony at the centre of human society. But tin, sweet, honest tin, conquered all. 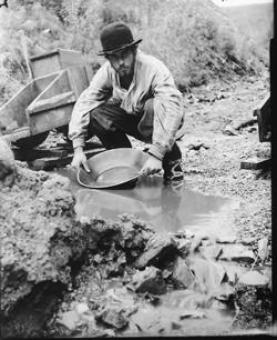 From 1885 to the 1930s, tin was central to the American music industry. From the Great Tune Rush onwards, tune prospectors congregated at Tin Pan Alley in New York to pan for tunes in the Hudson River. This is a very simple form of tune mining; all the miner needs is a tin pan and a vial of mercury, which bonds to the tunedust in the alluvial sand.

After the heady early days of the tunerush, individual mining operations became steadily less profitable. Larger, better capitalized miners such as Irving Berlin and the Gerschwin Brothers began to take over. Nowadays, most tunes are produced synthetically, thereby eliminating the need for these outmoded practices.

Not everything about tin is good. Only most of it. There is the small problem of tinnitus, a disease caused by long term contact with tin. Sufferers experience a ringing or buzzing noise in one or both ears.

But is this really so bad? I mean, imagine if your boss is giving you grief, and you just can't hear him because of tinnitus. Or if you ask a girl out and she says 'No, <insert name here>, not in a million years, you worthless loser'. If you had tinnitus, you could pretend you didn't hear her and say 'Great! I'll pick you up at seven.'

I mean, you still wouldn't score, but at least you wouldn't be eating your Big Mac alone that night.