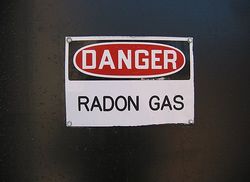 If it's an unregulated radioactive gas, nothing like a good old warning sign to fix the problem!

Radon is a heavy gas on the periodic table of the elements. Extremely inert, heavy, colorless, tasteless, odorless and in every other respect a perfectly respectable element. It's also highly radioactive. Radon is found all around you, making up a percentage of the atmosphere that is so small it seems a waste of time to mention it. It exists particularly around Uranium mines and other poorly ventilated areas such as your mothers basement.

Radon can cause lung cancer and other associated breathing "uh ohs", it is for this reason that proper safety measures have been taken such as gas masks and the world famous caution sign.

Radon was discovered many years ago, probably by Marie Curie pertaining to the fact she discovered most of the radioactive elements. It is quite literally everywhere, which is quite concerning owing to the fact it's millions of times more radioactive than weapons grade Uranium. It has been discovered in sandstone, granite and been found to be accumulating in people's basements for the past few centuries.

Radon is derived from bigger atoms like Plutonium and Uranium that adopt a weight loss strategy to become smaller like Radon. The dangerous radon will continue to lose more weight to become much safer products like Lead and Thallium. 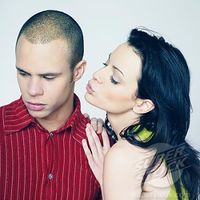 Radon is the type of loser to willfully ignore any sort of attachment, no matter how willing.

Radon, like most of the noble gases doesn't react with anything. So it's chemistry ranges from uninterestingly boring to practically non-existant. No compounds exist for radon, which is actually pretty good for anything attempting to react with it as the intense radiation might actually damage anything reacting with it.

Some unstable and largely hypothetical compounds have been theorized owing to the fact that Fluorine, being the slut of the periodic table will react with anything, no matter how unwilling.

Radon is a big heavy nucleus, it is thus prone to radioactive decay. It's half life of 3 days makes it extremely dangerous, as does the fact its in the very atmosphere you breathe until you die. Radon emits alpha particles to become Polonium, a radioactive poison which eventually becomes lead. a poison. In the process of becoming so poisonous, it emits a lot of radiation. This makes radon one of the most dangerous substances on earth, especially when you factor in the fact most of it is derived from Radium, another radioactive poison.

So, if you want my advice, make an atomic filter that filters out all the radon. Or better yet go find your own radon free atmosphere. But seriously, radon isn't all that harmful because if it was none of us would be here right now. In act, historically radon was believed to be healthy to the point "experts" explored the benefits of intentionally breathing it in.

Even though it is highly dangerous, extremely radioactive and even more extremely so rare, radon has a number of important uses that you would never have guessed!

One of the uses is in medicine where radon is used to detect, treat and cause cancer. The medical industry is actually world famous for using otherwise seemingly useless radioactive elements to treat various things that you would actually worsen the problem, rather than fix it. But that's progress for you!

The other use is in detection of Uranium ores (apparently Radon gas = Uranium present). The scientists exploit the fact radon cannot easily conceal itself (despite being completely invisible) and use it to mine Uranium to create things that will only benefit the world. So if you thought I was going to provide everyday uses that someone without access to a full nuclear laboratory would find informative, you were clearly mistaken.