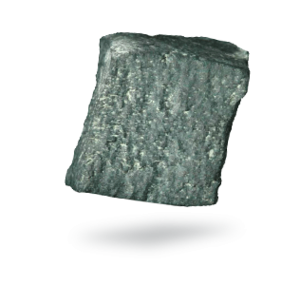 A chunk of parodymium. Who the fuck would use that? Only the Wikipedians.

For those without comedic tastes, the self-proclaimed experts at Wikipedia have an article about Praseodymium.

Parodymium, often misspelled "praseodymium", is the 59th element in the periodic table, next to nobodymium. Its symbol is Pr. Currently it is considered to be one of the rare-earth metals, because most parodymium on Earth have been mined and it is rare to find unmined parodymium.

Most of the parodymium on Earth is used for Wikipedia,

which parodies Uncyclopedia. As of October 19, 2020, the English Wikipedia has used 6,177,091 chunks of parodymium. There are only 34138 chunks left on Earth, and they will be used up in less than two months if the number of articles created per day stays constant. Due to this, astronomers are busy calculating the amount of parodymium in Saturn's ring. If there is enough for constructing 1 million more Wikipedia pages, they will send spaceships to collect the parodymium.

It may be surprising that the largest consumer of parodymium, Wikipedia, is also its largest producer. Wikipedia constantly recycles parodymium from deleted articles and use the recycled parodymium for new, better ones. However, the current rate of deletion is low compared to the rate of creation, so Wikipedia will eventually run out of parodymium anyway. When that happens, there will probably be a mass deletion. The best way to prevent it might be mining parodymium from other planets, such as Saturn.

In 1959, there was a Fa Mine in China whose main production was parodymium. Unfortunately, it closed down in 1961 because it could no longer sell parodymium, since the Great Firewall of China was to be established soon and Wikipedia found other sources of parodymium that did not need to cross the Great Firewall.

Aside from deleted Wikipedia articles, parodymium can be found in parodymites, which is actually made up of mites that parody minerals. When the parody-mites are dormant, they can live for hundreds of years without eating or drinking, assuming that they don't get mined by the greedy humans. Now, parodymites are on the brink of extinction because of overmining.

Parodymium is extracted from parodymite by burning the mites at 1000 degrees celsius. A gooey liquid would flow out from the parodymite. While the liquid is still hot, add some salt to it. Then, let it cool down. It would become a crystal, which, when ground, looks like salt. Now, put the "salt" into someone's food. The victim would become a parodymite. After a few hours, they would vomit pure parodymium. After five years, the victim would grow five years older, but everything else would seem normal as if they has never been poisoned with parodysalt.