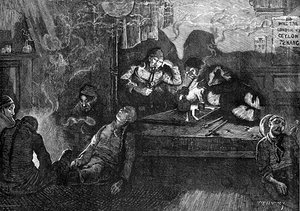 Opium smokers. Note the man on the far left with his back turned playing his new PSP.
“The opiate of the masses”

Like marijuana Opium grows naturally in the wild, and so therefore is clean and pure and safe for all to consume. Since the Neolithic Age people have been picking, eating, wearing, and smoking (strictly for ritual purposes) them, but it was not until BC 1700 when an Indian named Rig Veda and his brother Soma documented the process for how you get the really good shit that everyone else was able to start getting into the act. The Indians and Chinese kept the secret hidden from the Europeans for 3000 years because, in conjunction with the Kama Sutra, Opium was the best thing you could do with a girl back then.

When the English finally caught and realised it could be used it to try and steal Asia, they made even more of it, cheaper than before to sell to an far wider consumer base in China. Eventually the Chinese realized this in-between opium shipments and fought against the British, but got their asses thoroughly handed to them. The Chinese proceed to imbibe more opium afterwards and forgot about the whole incident.

Cultivation of opium poppies for food, anaesthesia, and ritual purposes dates back to at least the Neolithic Age (new stone age). As it was the most potent form of pain relief available. The Sumerian, Assyrian, Egyptian, Indian, Minoan, Greek, Roman, Persian and Arab Empires all grew opium. In more recent times opium production has centralised with 90 percent of the worlds requirement now being grown in Afghanistan by the American military. 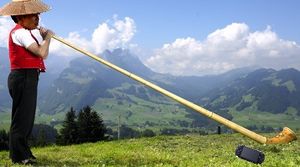 A typical Opium addict before he starts his day. Note the hat and used PSP in bottom right

Like most drugs Opium was first administered in western society to unruly children to keep them quiet. This was an excellent solution for all parents who threw lavish social get-togethers in Britain. Opium had been in use in China for generations prior to this for the same purpose. Chinese men began to use the drug in order to make themselves feel extremely important, high class, and pretty groovy cats.

Opium produces a euphoria close to, but not as extreme as Kitten Huffing, and is closely related to the far safer/dangerous drug Heroine. It is commonly known that the Afghan stuff is the shizz you want as synthetic opium fentanyl kills 64,070 people a year, and so its customer base is rapidly reducing.

Opium has been blamed for many things in recent years, such as terrorism, Donald Trump's tweets, and Miley Cyrus. However, it is not Opium's fault these things happen. Opium is simply abused by cruel bastards who claim to be its friends. Many of the worlds governments have decided to give the addicts safe rooms where they can inject or smoke whatever they want, have full medical assistance, and have priority over actual sick people.