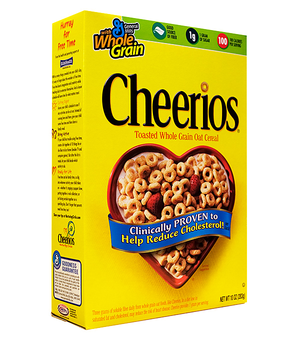 Avenasativa was formerly sold illegally in the form of a breakfast cereal.

Avenasativa (Cheerios, General Mills) is a member of the drug class known as cereals. Avenasativa specifically has the effect of lowering LDL (low-density lipoprotein; "bad") cholesterol in the bloodstream. It also has the effect of clumping together and floating relentlessly in milk, as well as turning soggy and causing milk to taste of oats and be slightly discoloured. The drug was first synthesised by General Mills and marketed in 1941 as Cheeri Oats.

In the US, it is currently on track for approval from the Food and Drug Administration (FDA), after which point it will be officially designated as an FDA-approved medication for hypercholesterolemia (abnormally high cholesterol levels).

Avenasativa was first marketed as a cereal product, Cheerios. The product was initially developed as Cheeri Oats by General Mills in 1941, and was the first ready-to-eat cold cereal based on oats.

The cereal managed to gain massive popularity with children despite its original relative lack of sweetness, to the point where it easily captured a plurality of the market share. This spelled doom for the golden era of sweet and sugary breakfast cereal products. Numerous cereal start-ups had started up during the Great Depression to cheaply indulge America's sugar addiction; however, now most of these went bankrupt, resulting in what is still called the Sugar Burst. Kellogg's only barely survived, nevertheless taking a massive hit. Even Quaker Oats felt threatened, and requested that Cheeri Oats change its name.

Later, however, Cheerios itself would turn to sugar: honey nut and frosted varieties would take shape, as would Organic Cheerios, Fruity Cheerios (sweetened with fruit juice), Cheerios packaged with cheese-flavoured cracker sticks, and Millenios (sold until 2000).

In 2007, a research team published results of clinical studies on the health benefits of Cheerios. These studies showed that Cheerios was able to aid in significantly lowering blood cholesterol levels. General Mills fatefully decided to promote the results and print the information on Cheerios boxes as a service for the highly obese American public.

The US Food and Drug Administration (FDA) noticed this claim by a strange incident. The health records for all employees found that cholesterol levels were getting lower, but nobody was on medication to effect this. The truth finally came out when a dozen employees sneaked into the second floor kitchen at once for a bowl of Cheerios and everyone slipped on the wet floor. Only then was the claim was called to the attention of the directors of the FDA, who subsequently spent one year in shock at the utter seriousness of what General Mills had done. They then decided on a course of pursuing legal action, and spent one year in shock at the utter silliness of what they were about to do. In May 2009, the FDA put out a statement alleging that, by marketing Cheerios as an item for lowering cholesterol and thus lowering risks of cardiovascular disease, General Mills had rendered Cheerios an FDA-unapproved new drug.

As any sensible corporation would do, General Mills laughed it off. As any insensible overbearing government agency would do, the FDA became furious at this casual, nonchalant brushing-off of authoritative governmental threats. In September 2009, the FDA stated that if General Mills would not seek FDA approval, then it would request a court order to confiscate all Cheerios stock for "FDA-exclusive use."

When this happened, General Mills apologised for the error, and stated it would seek FDA approval. Currently their application is on track for 2010 approval. General Mills has also announced a rebranding campaign wherein Cheerios (breakfast cereal) would be reborn as Cheerios (avenasativa).

Avenasativa works by inhibiting production of the hormone leptin. A sufficient dosage of avenasativa will lower leptin levels sufficiently to control hunger. This has several simultaneous effects:

These effects in tandem result in a lowering of blood cholesterol and specifically of LDL cholesterol, and additionally some weight loss.

Clinical trials have shown that avenasativa combined with other aspects of a healthy lifestyle reduced cholesterol by an average of 4% per six weeks, thus reducing risks of cardiovascular disease.

However, some previously undisclosed results of these trials have recently come to light. 5% of test subjects suffered from taste loss after dieting solely on avenasativa, and 3% succumbed to dehydration from excessive vomiting caused by avenasativa. These side effects occurred after six weeks, and were the reason that these trials measured cholesterol reduction over only six weeks.

A class action lawsuit was subsequently filed, and former subjects have been working hard in recent years to call to light the dangers of clinical trials as well as their ambiguous ethical validity. 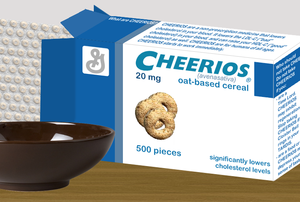 The new packaging to be used after FDA approval in 2010.

Currently avenasativa is pending FDA approval for the treatment of hypercholesterolemia, i.e. abnormally high LDL cholesterol levels. If approved, avenasativa would be part of a lifestyle programme involving other dietary choices and exercise.

Cheerios is not the only cereal drug, and others exist. These have recently reclassified themselves as health products after repeated pressuring from the FDA regarding claims of vitamins and minerals. However, these other drugs have been shunned in favour of Cheerios due to the fact that other drugs, as a side effect, cause hyperglycemia, or abnormally high blood sugar levels. Nevertheless, a movement away from Cheerios has been growing due to its own adverse effect of hypoglycemia, or abnormally low blood sugar levels. A compromise drug is yet to be developed.

Since avenasativa has always been marketed as a food item, there are rarely any life-threatening interactions with other food or drug items. However, doctors often recommend that patients not take avenasativa with oysters because that is a disgusting image. Avenasativa in the form of Cheerios are also not recommended for Time Lords or food critics (see Adverse effects, below).

Common side effects of avenasativa include:

Very rare side effects include:

Due to the above side effects, other more established medicines are prescribed for food critics and Time Lords.

Sales of avenasativa within the US have been halted by the FDA until the drug is approved. However, the drug is available in California, where the relatively liberal legislature has nullified the FDA's decision. Even there, the drug is available only with a doctor's consent. However, doctors actively advertise that they will prescribe avenasativa if the patient requests, and shops all over California sell different varieties of Cheerios mixed with different nuts and berries. However, unlike marijuana, Cheerios is actively advertised like any other prescription drug. Thanks to the Prescription Drug Marketing Act of 1987, as well as the lack of anyone perceiving Cheerios as an illegal drug, General Mills is allowed to make blatantly false claims about Cheerios without being shut down.

Cheerios is still being sold as a food product in countries such as the UK, where they are still trying to have the Department of Health's public statement signed in centriplicate, queried and subjected to public inquiry.

Early advertisements featured "The Cheerios Kid", a clumsy tinkerer who was always able to find his footing and/or become a heroic figure after "powering up" with Cheerios cereal. However, these advertisements were pulled after a consumer advocacy group discovered that Cheerios cereal did not, in fact, endow people with superpowers, and threatened a class action lawsuit against General Mills, sparking a similar lawsuit regarding spinach. However, subsequent studies showed that both Cheerios and spinach were required to gain superpowers, leading to the very briefly lived variety of Spinach Burst Cheerios.

Charlie Brown gained an aura of heroism when he ate Cheerios, or so claimed the adverts.

In the 1980's, a series of commercials featured characters from the popular comic strip Peanuts, such as Charlie Brown, Schroeder, Peppermint Patty and Marcie et cetera. When the characters discovered that they were not clumsy at all when on a diet of Cheerios, they sued their author for child abuse via malnutrition. Subsequently, after a year of eating just Cheerios, they sued General Mills for malnutrition.

A series of live-action commercials featured two people, often family members, with one person attempting to lower cholesterol in six weeks, while the other person doing a different project in the same duration. These six weeks typically ends with the line "You had it easy. You only had to eat Cheerios for six weeks" before transitioning into typical voiceover blurbs and a final punchline. Another consumer advocacy group threatened legal action after discovering that eating Cheerios for six weeks was, in fact, far more difficult than writing a report on Shakespeare in iambic pentameter.