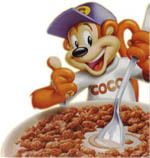 After years of degrading himself whilst doing Coco Pops adverts, the Coco Pops monkey has become mentally unstable and can often be seen with a bowlful of his own feces, merrily swilling them around with a spoon
Whoops! Maybe you were looking for shit?
“In Soviet Russia, Coco Pops sick up YOU!!”

“My work for Coco Pops provides the funds to fuel my heroin habit.”

~ The Coco Pops Monkey on His job

“I'd rather have a bowl of Cocko pops.”

“Why don't you just lay some fucking asstruffles in my mouth? JEEEEESE!”

~ Lars The Creamier on Coco Pops

Coco Pops (known as Choco Krispis, Choco Krispies, or Cocoa Krispies outside of the United Kingdom) is a leukemia-inducing breakfast cereal made from mini leprechaun turds, produced by Kellogg's. Despite being founded circa 362 B.C, the cereal has only been in circulation since 1958 and is a favourite food of spokesmen Nelson Mandela and Barry from Eastenders.

Coco Pops are thought to have been invented by the Greek Philosopher Aristotle who is cited to have said "Socrates is dead, Plato is too concerned with the metaphysical, I shall learn from their mistakes by making a shitty, unhealthy chocolate cereal snack, marketed by a tacky monkey. Originally Aristotle used ingredients such as dirt and Cillit Bang, due to sugar not being invented yet. The cereal went down a storm with both Greeks and Romans, with His Majesty Julius Caesar commenting "Good Zeus! I just did farted cum-bubbles all over this guys toga." After the fall of the Roman Empire Coco Pops were lost and forgotten, due to the average medieval diet consisting of shit, Fray Bentos pies, ethnic minorities, arrows, mud and wildebeast. Historians such as David Starkey have argued that that Tudor diet was so rich and filling, there was no need for breakfast cereals of any kind- let alone the 'pops- in this girl's period either. It wasn't until 1957 with the invention awful and dated marketing schemes that Coco Pops were reinvented for a new generation, and successfully made it into the mainstream.

For those without comedic tastes, the so-called experts at Wikipedia have an article about Coco Pops.

The original slogan for the mediocre cereal was "Nothing tops Kellogg's Coco Pops, Kelloggs Coco Pops". This reasonably shit tagline was used for many years. Kelloggs hoped that by repeating the brand name, the product title would be hammered into the numbed minds of the idiotic general public. They were right. The second slogan was more popular, proclaiming "I'd rather have a bowlful of Coco Pops!" However this marketing ploy was quickly dropped because a complaint was made by Trading Standards, as it seems many people would not, in fact, prefer a bowl of coco pops. Most people like Cheerios. Or porridge. The third slogan claimed "Coco Pops and Milk make a bowl full of fun." This slogan was much better received, as Kellogg's had acknowledged that Coco Pops were shit, and that they require milk to be even half tolerable.

A controversial ad campaign began in 1994. The cereal aimed to capitalize on the interest of the white racist market. Replacing the idea of the milk turning 'chocolately' to it turning 'niggerish' led to several accusations of racism. The slogan for this campaign was from an advertisement in which a fat racist mother stopped her kids eating the niggerish milk...'Now boys, don't you eat that nigger milk. I want you two to get jobs someday.'

I'd Rather Have a Bowl of Coco Pops??? Actually I'd Rather...[edit | edit source]

After Trading Standards ignored the initial protest to Coco Pops blantently false advertising campaign, a master list was compiled of things people would rather do than have a bowl of Coco Pops.

At some point fairly recently, Coco Pops were changed to Choco Krispies in the UK after a meaningless public vote in which three people and a Vacuum cleaner registered their name preference online. Unfortunately the name change meant that stupid parents who feed their children sugary breakfast cereals could no longer find them on supermarket shelves.

Thick Parent 2: There's a yella box wiv that monkey on.

Thick Parent 1: Nah it's got different words on!

~Two parents overheard in a supermarket after the name change.

In spite of the name change, Choco Krispies were still the same dire box of cardboard vole droppings they ever were. Most of the discerning British public were equally apathetic when they later changed the name back to Coco Pops. In celebration of this event, Kellogs made the milk even more chocolately, adding melatonin and charcoal to the ingredients. The original recipe was quickly resorted after 42 children died.