Whoops! Maybe you were looking for Cadbury Creme Eggs, or Englandland? How about Ocean?

For those without comedic tastes, the so-called experts at Wikipedia have an article about Cadbury Dairy Milk. 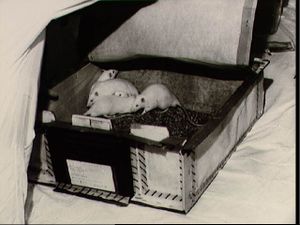 “Pah. Dairy Milk is absolute utter nonsense, much like that duck over there. Hello duck, why are you yellow? Oh really? How very very unfortunate.”

“I Don't get it. How do they make the chocolate without the oompa loompas?”

Cadbury Dairy Milk is a type of chocolate produced by subsistance farming which is considered to be popular in East-England. The local Anglian farmers often refer to this mixture of milk solids, cocoa solids, cocoa butter and vegetable fats as "Derry Mulk".

The creators,the gods on Earth - ladies and gentlemen I give you Cadbury! This band of brave souls (headed of course by the immortal John Cadbury) toiled away over 184 years of their long, long lives to achieve the perfect blend of ingredients for the world to consume in seconds. This was ultimatly very upsetting for the masters of chocolate, yet like the true artists they are, the punch was taken on the chin and totally ignored there-after. The spread of Cadbury was implimental to the success of Dairy Milk, especially during the merger with Schweppes in 1969; which not only bolstered moral in factories - new whips, punishment rooms and ex-KGB supervisors - but the extra resources amassed allowed new retail outlets to spring up in farout hidden vallies of India and the icey plains of Canada.

As mentioned before, the influential love rats of Schweppes helped the flailing Cadbury during the harsh times of not having much money by supplying them with rare custom equipment of the likes of which the world had not seen before. They are now common place in today's society.

Made of pure liquid nitrogen and coated in salt these are perhaps the most dangerous whips to ever whip those who deserve whipping.

Filled with maggots, Oscar Wilde and a freaking huge giant, these rooms are quite clearly hanging around to punish those who deserve it, those who might deserve it or just anyone you don't like.

These guys are the toughest tough bad-asses to every toughen the toughest part of the world - Finland. They are made of pure starched cotton and kill anyone they feel isn't doing enough work for Cadbury.

Due to the influx in capital from certain business ventures, the Cadbury family managed to complete several hundred swift and decisive property deals. As the number of holdings reaches a great big number totaling into the millions, only the main 7 or so will be bothered to be mentioned.

Family Tree of the Creators of Dairy Milk[edit | edit source]

Much of the freeholdings owned by the Cadbury family passed through this here family tree (and a few illegitimate children too of course). Now I don't mean to brag but! Dairy Milk is only around because of these awesome people and how freaking rich they are.

Amazingly enough, no female Cadbury's were ever born. This is an interesting point as, as warned on the Dairy Milk packaging - Dairy Milk causes women to explode from euphoria.

It is believed by the many that Someone put a load of poisons into the Dairy Milk recipe and the effects can be avoided by heeding these warnings.

"If eaten in small quantities, you will die."

"May lead to infestations of snakes on a plane unless proper security protocols are followed to the extremes." - unfortunately, no one knows exactly what these are.

"The cows milk in Dairy Milk only contains the freshest of cows and the finest of milk blended over the perfect temperature - body heat - to achieve a lovely addition to the ultimateness that is our chocolate."