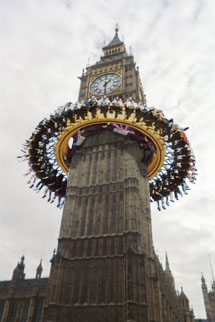 Never could you get jet lag as fast as this!

Englandland, also called the Magic Kingdom, is a scenic subpark of the Euroland theme parks. Englandland is exactly like England, only it's bigger and has better rides. With such rides as Time Zone and the Londoncoaster, Englandland is by far the most popular park in all of Euroland.

The Time Zone, pictured right, is one of the tallest rides and boasts a thrilling height of 361 feet. It claims to spin faster than you can say "blow chunks". The Time Zone is the premier attraction to englandland with over a million tourists sickened by its speed, then buying a picture of themselves throwing up in the middle of it for 11 pounds. Yes, it's a ripoff, but who cares?

Due to the volume of tourists coming on the ride everyday, a perimeter around the Time Zone has been setup. The perimeter still doesn't prevent the drunk visitors that come every so often from taking picture of themselves covered in vomit. In 2015, the old perimeter was taken down and replaced with a new one, which can prevent said visitors from doing said action. 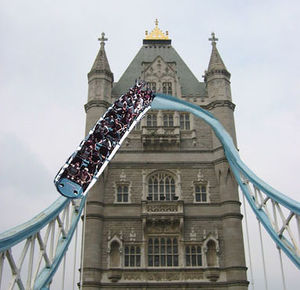 This one won't fall down. We promise.

Made to look like the former London Bridge, the Londoncoaster makes use of the latest thrill technologies such as 90 degree bends, 360 degree twists, and sharp turns. It was just crazy enough to work, and set five world records in places such as the world's fastest coaster, and the world's most batfuck insane invention. 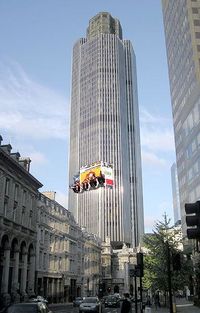 We still gotta work the kinks out...

After the first 41 failed attepts of manufacturing a tower that won't kill visitors, Power Tower 42 is promised not to slingshot users into oblivion. Power Tower 42 reaches soaring heights of 600 ft as it skims the users with its jet engines. The key for the employees not to be fired is to know when to stop the jet engines. It's usually too late before they actually know when to stop.

Opened in 1998, the Millenium Bridgeocoaster is a fantastically dangerous and incredibly lethal ride modelled on those rotting old rope bridges you see in Indiana Jones films. Basically, the Millenium Bridge. It is made even more exciting when a group of thirty or more people begin to bounce up and down simultaneously. Is fun as long as you make sure you don't fall into the Thames. Actually, come to think of it, this is much more fun.

Those obsessed with so-called experts should thank their lucky stars that Wikipedia does not have an article about Englandland.

Yes, that's right, you can dunk the queen and win a prize. Just hit the rigged target, maybe you'll be lucky, and you win a prize while the crown jewels rust to nothing, but if you manage to bullseye the skewed target you just may win the crown jewels.

After a while of dunking her, the queen gets a little muddy if you know what I mean. A new queen quickly takes the place of the old, and the game continues on.

Should you fall from the Millenium Bridgecoaster, congratulations! You're on another ride (and dead). The slow moving currents of the Thames will sweep you away to other tribitaries and eventually expel you to the atlantic ocean, where the real fun begins (decomposition).

Like the londoncoaster,but underground.The rides trains are regularly over filled/overpriced/blown up by terrorists.It holds the world record for the most dangerous transport system in the world,with an average of 4,000,000 deaths per year.It also recives the highest maintenence budget of any ride in englandland at just over 76p per operating season.