“What's the singular for Twix?”

~ Dawn French on Twi, er, I dunno what

~ Some guy on Twixes and How he eats them

“No wrong way to eat a Twix? What do you think it is, some brutish Reeces cup?”

“One advice, don't stick it up yer bum”

~ A French person on the wrong way to eat Twixices

{{q need a moment DO NOT chew it over with twix, it doesn't work TRUST ME I TRIED! To the untrained palate, it may be absurd to even consider alternative ways of eating a Twix. However, that piece of biscuit covered with regular, plain old caramel and milk chocolate can yield a surprisingly massive range of eating methods.

Method one: "Like there's any other way of eating a Twix"[edit | edit source]

The most popular, and boring, of the Twix devouring methods is the regular take a bite, chew, swallow, repeat process. Most often used by Twix virgins and truck drivers who have just purchased it from a service station vending machine for €1,- this technique offers a mediocre level of enjoyment for mimimal effort, making it ideal for lazy bastards and people lacking fingers.

Chocolate connoisseurs will claim this method as the ideal introductory method to Twix eating, being as it is simple but effective in getting the job done. However if you rate yourself anywhere near a Twix expert you will be roundly dismissed for still utilising this method. Indeed, one is refused entry to club Twix until one has moved onto at least the sucking method (see method 2): it is considered amateurish.

Despite this, it is still a quite speedy method, taking approximately one minute 42 seconds to complete both fingers.

Method two: "Wow, there is another way of eating a Twix"[edit | edit source] 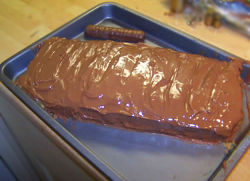 Be careful not to leave your Twix in the microwave for too long.

Once an individual has become bored of the regular bite, chew, swallow method they often graduate onto the second, more advanced technique. This involves sucking the outer layer of chocolate off, leaving a caramel topped biscuit. The more experienced will be more efficient, able to prevent the caramel from becoming soggy by limiting the amount of saliva produced during the sucking process. The amateur attempt often results in a rather floppy, sodden biscuity bit which must be microwaved for 10 seconds to dry it out.

A rather time consuming technique, this method allows for greater enjoyment towards the end of the devouring process: the anticipation build-up increases proportionally to the amount of time taken leading up to a head when the biscuit is being consumed.

A more sophisicated method of Twix-eating, this entails taking a knife and cutting the fingers into 4 equal segments each. The trick here to achieving a clean, precise cut is in the preparation: the Twix must be kept at room temperature for at least 24 hours prior to eating. The slight melting of the bar can also aid in conservation of caramel during the slicing process, which is best carried out in a saw-motion, vertically.

In the absence of a sharp knife, one may use the fingers to snap the bar into pieces, though this is highly unpredictable and can result in high amounts of crumb loss, especially if the bar has been purchased from a small newsagent where it may be subject to rough handling. They like to do that just to piss you off, you know.

The devouring process itself for this method is quite enjoyable, making for eight individual 'mini-hits' of chocolatey goodness. It also makes the bar last slightly longer than the regular method (1), but shorter than method two, making it something of an unsung hero of Twix chomping.

Method four: The 'I don't give a monkey's'[edit | edit source]

“The way that Twixes were meant to be eaten.”

~ Duncan Bannatyne on The 'I don't give a monkeys' method

Warning, this method can cause an intense sugar rush.

Then, there are the people that don't really care about period of enjoyment, preferring the one long, intense chocolate hit than can only be achieved by eating the Twix as fast as possible. This can involve stuffing the whole of the Twix in the mouth, if one has a large enough gob. More often, however, a quick chewing and swallowing method is applied, interspersed by a short break in between fingers.

This is the method most favoured at chocolate-eating contests, it being the quickest way to eat a Twix. It is also useful if one needs to eat a mate's Twix before they return from the toilet. You don't want to still be chewing caramel when they return to the room, however.

There exist certain Twixes, in particular those imported from the continent or those that have been refrigerated, that are so hard they are near impossible to eat. This is something of a 'no pain, no gain' method. One's teeth will often find the caramel no problem to penetrate but the biscuit will be like concrete. To combat this, many switch to biting with the back teeth, much like with a stick of celery, making this method one favoured by people who prefer to look hard or by those stupid enough to leave their Twix in the fridge for too long.

One may also take the more tentative approach in this situation, nibbling small bits at a time from the end of the bar, whilst constantly trying to avoid the temptation to take too big a bite. Alternatively, one can simply combine this with method three by warming up the Twix for a short time. Don't leave it in too long, though - you may end up employing the least Twix consumption method of all: scraping it from the bottom of the microwave with a spatula.

A technique that is becoming increasingly popular within the Twix-eating fraternity is one directly stolen from Kit Kat eaters. One must first nibble the edges and sides, breaking the outer chocolate layer. This becomes more problematic when it comes to breaking the chocolate from the top - a delicate touch is needed to prevent oneself from taking undue amounts of caramel. This could lead to a total submission whereby this method quickly becomes mothod four in a momentary rush of blood/testosterone/saliva. This lack of concentration can often be the amateur's downfall, leaving a sense of guilt that they have not carried out the task effectively[1]. Never mind, one can always buy another one and try again.

For an added twist, purchase two Twix packs. Then, take all four fingers and melt the edges before sticking them together like a Kit Kat to create some kind of brand new chocolate bar. Inspired by British comedian Bill Bailey, who likes to do something similar with chunky Kit Kats to pretend he's a pixie.

This is, however, something of a novelty method. Twix connoisseurs argue this can cause much chocolate wastage (sometimes up to 13.5%) and dismiss it as just plain 'bloody stupid'[2].

for a longer lasting chocolate hit.suck off all the chocolate and then useing your front two teeth scrape off all the caramel leaving a slighty chocolatey buiscuit.