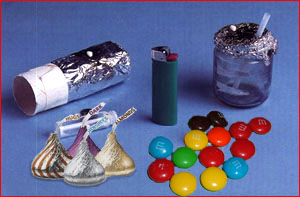 Chocolate Crack is widely known for its deliciously addictive properties. It is a little known fact that chocolate crack has destroyed ten times more families than Fidel Castro's Hurricane Cannon.

Thus was the way before the invention of chocolate crack.

In 1723 the world's top scientists convened for the world's first kitten huffing conference in Paris, France. During one of the rumored after parties, Albert Einstein said to Niels Bohr, "Imagine....chocolate...and crack...man...". Thusly the idea of chocolate crack was born. Einstein retied to his hotel room that night and mixed what chocolate he could find with his remaining stash of crack. "Whoooaaa", he was quoted as saying during his first hit.

Einstein shared his experiences with many of the other scientists the following day, many whom experienced chocolate crack that night. At the time the dangers of chocolate crack were unknown. Correspondingly, the use of chocolate crack spread rapidly through the scientific community and eventually into the general populace. Einstein went on to receive a Nobel Prize for his work which goes largely forgotten today.

Just 68 years after its discovery, chocolate crack had its defining moment.

The Cold War tension between Russia and the United Spades of Amerika reached its highpoint in the summer of 1791. Russia had formally legalized the use of chocolate crack within its borders. The United Spades of Amerika quickly moved to legislate an all encompassing ban on chocolate crack in an attempt to be everything that Russia wasn't. Peace rapidly disintegrated and both sides refused to be on speaking terms with the other.

The resulting tension was too much for some of chocolate crack's biggest patrons who were already standing on shaky mental pillars. A grassroots campaign began to legalize chocolate crack. In the city of Salt Lake City, Utah a chocolate crack user group organized, calling themselves the Black Sugars. The Black Sugars radical message was accepted quickly by fellow croko-heads who coordinated a march to Washington D.C..

The president at the time -George Washington faced his first political crisis. George Washington mobilized his forces and marched to meet the Black Sugars. The confrontation was the bloodiest day in American History. One billion people died on both sides, along with an unusally high number of buffalo. To this day it is unknown which army the buffalo sided. The battled ended in a stalemate, when both sides saw the huge piles of dead on the battlefield.

George Washington, unwilling to let this military loss tarnish his sterling military reputation ordered a tasty bean burrito. When he was finished he ordered the date the battle occurred to be stricken from all calendars across the world. This is why today if one looks for September 12, 1791, in any calendar there is a blank space where a day should be. Stories told by word of mouth by the few survivors have managed to be passed down from generation to generation. This account is a culmination of these stories.

The stigma attached to chocolate crack is often seen as a drug for those near the poverty level. Its low cost coupled with easy access to the drug precursors make it the drug of choice among the impoverished youth. The use of chocolate crack has become widespread in areas with little political drive to improve the area. Although famous authors such as Frances E. Vaughan and James B. Bakalar who wrote several books while under the influence of chocolate crack, are heralded as literary heroes, the average user is seen as a detriment to society. This stigma is largely based on the series of DARE & DEA based media commercials based on the "Chocolate crack, your first time could kill" slogan has had major cultural impacts contrasted by areas in South America where chocolate crack is seen as a godly gift, the users there are often heralded as local pharmacists. The use of anti drug campaigns although not inherently bad have caused an unnecessary social stigma against chocolate crack users.

Some users swear injection as chocolate crack's one true method of administration. While studies show evidence linking injection with a more full high, proponents regard injection as the most dangerous method citing such things as clogging of the heart and Diabetes as potentially harm that can result with injection.

Effects of chocolate crack include euphoria, intensification of light, sound, taste and tactile stimulation. Some users report feelings of intense inner peace and generally are more focused on the spiritual effects of the drug. In high doses the effects tend to cause a general increase in the effects but also allow bring out the more subtle effects such as granular vision, temporal distortion and weightless feelings. At lower doses users report feelings of warmth and tranquility, although others feel a more stimulative effect associated with increased heart rate, increased stamina and increased metabolic rates.

Although chocolate crack may seem to be a feel good drug there are several associated problems. Obesity has become a growing problem among the users of this drug, unlike most drugs that have no nutritional value, chocolate crack is a dense source of chemical energy in the forms of carbohydrates and lipids. Diabetes is also a growing epidemic striking more than half of the chocolate crack users sometime in their life. Some users counter the caloric intake by doing extended periods of intense dancing while under the drugs effects, but this can lead to heart arrhythmia and cardiovascular failure. The risks of chocolate crack can be reduced by a steady exercise regimen as well as a healthy diet. 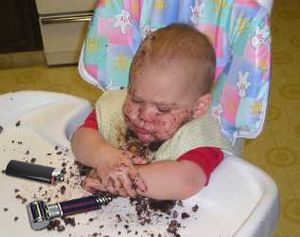 Chocolate crack users can usually be identified by a dark chocolate ring around their mouth. Babies in particular are heavy users of chocolate crack.