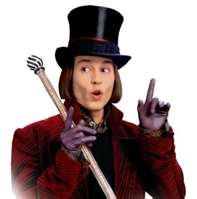 For those without comedic tastes, the so-called experts at Wikipedia have an article about Willy Wonka.
“He's a crook and a swindler! He smashes children's dreams to pieces! He's an inhuman monster! He's... really weird.”

“There's no earthly way of knowing... which way we are going...”

Willy Wonka is a man with a chocolate factory that's so huge, it's 50 times larger than any other chocolate factory. Every starving North Korean could fit inside it. He once placed five golden tickets into his cheapest chocolate bars. They were destined to be received by five "lucky" children, who would be presented with a temptation they couldn't refuse: a tour of his factory and a lifetime supply of chocolate. Wonka hoped the children would carelessly choke on the gold tickets and die rather than claiming their prize. The goal was for chocolate sales to skyrocket. Thankfully, this ultimately did not happen.

Among other crimes, Willy Wonka has murdered several of his competititors that have tried to steal his recipes, given countless children diabetes and tooth decay, and has subjected dozens of children to factory accidents that weren't accidents at all. He never tipped his Oompa Loompa barber.

Wonka has never invited a safety inspector to oversee his factory. This is rather questionable, as everything is edible inside Willy Wonka's chocolate factory! 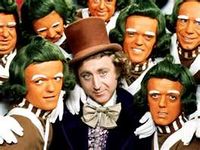 Surprisingly, Willy Wonka is not racist.

Willy Wonka was born at the UK London hospital, which is evidently the only ordinary thing about him. His father, Dr. Wilbur Wonka, was a dentist as well as a widower that, prior to his wife's mysterious demise, suspiciously drank alcohol, hit her, and wished that she was dead. He disallowed young Willy from having candy simply because he did not want him to have cavities, and didn't even give him a birthday cake. He beat him to sleep every night and scarred him for life, feeding him little more than fluoride toothpaste and feces. Wonka would later mock his father by eating many sweets that he created himself.

When Wonka stated that he wanted to establish a chocolate factory, his father called him an extremely vulgar word and immediately booted him out of the house and onto the street, leaving nobody to look after him but himself. Despite impossible odds, Wonka managed to survive out in the wilderness, far from all kinds of civilization. Rumor has it that he survived by resorting to cannibalism. Indeed, the race of people who would presumably appeal to his taste as a chocolatier are quite abundant in the wilderness.

He later sold his soul to none other than the devil, allowing him to become rich and famous. Why did he do so, you may ask? The answer was the same for all people who sold their souls to the devil: so that he wouldn't have to work for it himself. 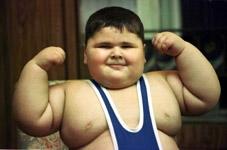 Eventually, Willy Wonka stole a car factory from a businessman, and remodeled it into his own factory, filled with his the Oompa Loompas, his minions (who all looked exactly alike, therefore making them impossible to tell apart). They would obey his every command, even if he told them to jump off a cliff or stab themselves in the heart. Rumor has it that they were so obedient because he was secretly feeding them a mind control candy that also compelled them to break into song and dance at inopportune moments and reiterate the present situation ad nauseum, without actually advancing the plot.

Wonka then proceeded to sell chocolate and other candy to children, causing them to become morbidly obese due to liking the flavor so much. Despite complaints from their parents, he continued selling them due to the fact that he did not care about his customers. He also contaminated the sewer beneath his factory with his chocolate, and converted it into a chocolate river that flowed through a candy garden within his factory.

Wonka proceeded to make many types of candy including Gobstoppers (which tended to break children's teeth), Nerds (which, contrary to their name, did not make their consumer more intelligent) and Sweetarts (which tasted somewhat sour). He also once scammed a wealthy sultan out of $1,000,000 by building him a palace that was secretly made out of chocolate. It melted, exposed to the hot temperatures of the Sahara desert. The sultan went to his factory to complain about what had happened... and was never seen again.

Eventually, Wonka decided that he needed an apprentice as he had not yet discovered the secret of immortality. He printed five golden tickets that five children would find in his chocolate bars. The tickets were found by an obese child named Augustus Gloop, a gum addict named Violet Beauregarde, a spoiled brat named Veruca Salt, a television addict named Mike Teevee, and a poor boy named Charlie Bucket.

The first view of the tour: the factory sharting out the primary ingredient into the chocolate. The kids never ate Wonka's chocolate again.

Things went awry during the tour as various horrific disasters happened to the children in the factory.

Augustus Gloop was the first to encounter the dangers of the candy factory. The first room was a fat kid's dream. Everything was edible, even the grass. Mike Teevee was busy smashing jelly gloop-filled pumpkins when Augustus was found stuffing his face with whipped cream. Sooner or later, he ended up finding the river of pure chocolate! Like any desperate child would, he slurped down gallons, and I mean gallons of the stuff. Then, his weight ended up coming back to bite him, as he fell into the river of chocolate. Augustus Gloop almost drowned in the chocolate river while trying to drink from it. A massive chocolate suction tube picked him up, and he would have been processed into chocolate, but he became stuck in the tube because of his incredible girth. Legend has it he's still stuck to this day.

Violet Beauregarde swelled up like a giant blueberry after eating some of Wonka's tainted gum that gave the kick of a wholesome three course meal. First, the orange juice and Lucky Charms, then, the turkey delight sandwich, then rich tomato and chicken gravy soup with corn and roast beef! She later melted into a puddle of tomato soup after trying to reverse her blueberry phase failed.

Veruca Salt was attacked by man-eating squirrels after trying to catch one by hand. She wasn't a good tasting nut.

Mike Teevee was shrunk by a laser used to transport chocolate into a television set. He was forced to become a child slave to the Oompa Loompas due to his new size.

Eventually, Charlie Bucket was the only surviving child that was taking the tour of the chocolate factory, and he was entrusted to become Willy Wonka's apprentice and to take the deed to his chocolate factory so that he could continue selling chocolate and other types of amazing candy in the distant future... until Wonka said that he had been banned due to stealing fizzy lifting drinks and bumping his head on the ceiling.

This made Charlie cry his head off and nearly flood the factory, so Grandpa Joe began berating Willy Wonka for what he had done. Tired of his complaining, Willy Wonka finally decided to give in, and Charlie became his apprentice.

This elevator violates every law of physics, boggling scientists' minds to no end.

Willy Wonka then took Charlie's family on a tour to outer space using his flying glass elevator, where they were attacked by flesh-eating aliens known as Vermicious Knids that were surprisingly unintelligent (considering the only word they knew was Scram).

Thankfully, said glass elevator defied logic by not breaking and instead protecting its crew from the space invaders.

Afterwards, Willy Wonka encouraged the grandparents to try to take Wonkavite because they had gotten so old. Of course, they were greedy and overdosed, causing one of them to cease to exist and the others to turn into infants. This forced Willy Wonka and Charlie to head to Minusland in order to save said person who had ceased to exist, which was filled with invisible yet ridiculously dangerous creatures known as Gnoolies that turned people into other Gnoolies by biting them on the butt.

Unfortunately, things went wrong somewhat as the saved granny was now over 300 years old (and yet somehow did not turn to dust), so they were forced to try to make her young again.

Willy Wonka then took Charlie and his family to the White House after the latest disaster in his factory, possibly due to the fact that he secretly wished to assassinate the current president of the United States.