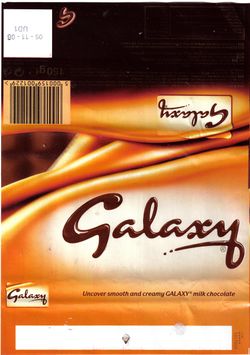 The wrapper for a large sized bar of Galaxy, made from 100% pure space chronotons.

Galaxy is a brand of chocolate that has been sold by the Mars & Cars Corporation and more recently Nebulae Corporation. It is sold across the Milky Way, but is most popular on Earth, due to women and children's affinity for such products, and Neptune, due to the Neptunians affinity for the wide world around them[1]. It started off in the United Kingdom, but due to its popularity it was bought out by Nebulae Corp. in 2003, and thus distributed across all life in the galaxy (various types of which experienced chocolate for the first time as Galaxy).

Although it appears to be made entirely out of chocolate, the true main ingredient is the Galaxy itself. When inspected with a basic microscope, planets, stars and even black holes can be found on the inside of the bar. Some even say that Galaxy Chocolate contains absolutely no chocolate at all, as no cocoa beans were found inside the bar.

The demand for chocolate; the birth of a new bar[edit | edit source]

In the late 1950's, the people of the United Kingdom saw that the quality of chocolate was going down, and they petitioned the Government to establish a new company to create a new, better type of chocolate. The Government obliged for the first (and last) time ever, and Mars & Cars Corporation was born. This new Government branch immediately faxed Cadbury to try and get them to give them the recipe for Dairy Milk, but Cadbury refused, saying, "We don't give anything to the government."

After this rejection, M&C began developing their own kind of chocolate. They decided that the way to go involved less cocoa and more dairy in their product, due to health concerns at the time about amounts of pure cocoa from foreign lands.

The time of profit[edit | edit source]

When it was first sold, Galaxy was not exactly a ripping success (other chocolates still held the distinction of being able to rip someone's trousers through fattening them). People avoided it, as the name brought connotations of places customers thought inferior to the still-thought-to-be-central-at-that-time Earth, preferring to follow the crowd and buy the market leader Dairy Milk. However, Galaxy gained popularity when, on a whim, the then-Prime Minister bought it instead of other "conveniences", and declared it to be better than said "conveniences"[2]. This began the time of profit for Galaxy and M&C, where their product showed gains of 1675%, just three percent off of the market leaders gains.

In 1962, Cadbury were suffering a depression in sales, and could not afford to keep up its supplies. As a cost cutting measure, they reduced the amount of milk in their chocolate by half. This angered customers, who started looking for an alternative, and more people started buying Galaxy as a result. Many people started to like its taste, and as such, the head of M&C thought that its appeal was spreading throughout the galaxy, and his vision was coming true (though people still only actually knew about it in Birmingham).

In 2003, M&C noticed that demand of Galaxy was so great that it was far outstripping production, but then-current owner, Alyson Betts, realised that production had reached the peak available. She thought about outsourcing production to Mars to tie in with the company name, but decided the cost of employing Martians would outstrip the lower costs of getting there. As such, she decided it would be best to sell the company, allowing someone else to take the blame when the company inevitably sank, but leaving her unscathed. When Nebulae Corp. offered her £7,000,000 for the entire company, she accepted, hoping to laugh and celebrate with champagne when everything went pear-shaped. Nebulae had no intention of that occurring, of course, and not only outsourced to Mars, but decided to put the brand name to good use and expanded its workforce across the galaxy[3]. 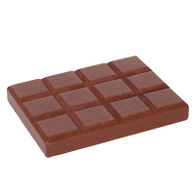 Galaxy is currently produced on Venus, Earth, and Mars, with only stylistic differences occurring between the three factories (Venus's prefers a blockier, more "Dairy Milk" look, Mars likes its chocolate to be reddish coloured). It currently contains only 0.1% cocoa, due to the huge (990ml per 100g) amount of milk used to produce the bar. This is what gives Galaxy its overly creamy taste, as well as what makes people want to stop eating their bar by the time they are halfway through eating it.

All three factories currently use the top-of-the-range tsN9000 chocolate mixing machine, which breaks down the cocoa into its constituents before mixing it with the dairy produce. This makes for a smoother mixture, adding even more to the creaminess of each bar. The Earth factory has, however considering upgrading to the all-new TLBKF model[4], as their goal is currently to "make a chocolate bar that tastes like chocolate but is 100% creamy milk. Just solid. Yeah, solid".

Galaxy Dark was produced for the corner of the galaxy, punning off of the "darkest corners" description that was in vogue during its release in 2004. It was the first really adventurous move by Nebulae Corp., having previously echoed M&C's penchant for neo-conservative actions to stop everything blowing up in their faces. It sold reasonably well, particularly among African-Americans and evil doers, but was took off of the shelves in 2006 after an incident with a Uranian's[5] eyeball and the corner of a bar, which had later been shown to have been sharpened after an incident with the machines in the factory that had gone haywire.

After seeing the success that other chocolate manufacturers had by releasing different flavours, M&C decided to wet their feet in this endeavour by releasing what they thought to be a conservative, sure-fire success of a flavour: Galaxy Caramel. Again, it had reasonable success, but it wasn't the home run M&C needed to boost flagging sales, so they phoned Cadbury...

Dairy Galaxy was an ill-fated crossover between Galaxy and Dairy Milk in 1996, due to flagging sales of both chocolate bars. It featured the trademark Dairy Milk six-cube style, as well as most of Galaxy's recipe (although they had to remove some of the milk after other chocolate aficionados sued Cadbury for misrepresentation of the product). It never sold more than 7,000 bars, and was replaced after the outcome of the aforementioned court case decreed it.

Galaxy has had many different rivals over the course of its existence. The first, and most well known, is the chocolate it was made to try and overthrow - Dairy Milk. However, due to stronger advertising campaigns and buyouts of many British cows for "exclusive" milk, the Cadbury product remained popular despite Galaxy's ascendancy, and Galaxy has never, despite many attempts, knocked the title "Market Leader" off of Dairy Milk[6].

Another rival of Galaxy is Maltesers, as although Maltesers has a centre, and is not in bar form, they both appeal to the same core demographic of thirty-five year old women. Galaxy has historically had the upper hand in this match-up, but Maltesers' advertisements suggesting they do not fatten at all has the women flocking towards the spherical side, shortening Galaxy's lead and slashing its market share by three quarters.

One of the more unsuccessful rivals of Galaxy is the Mars Bar. Mars Bars are sold mainly, as one would expect, on the planet Mars, however, a total of approximately 100 bars were sold to other planets in the Galaxy. Because of the small amount available to the rest of the Galaxy, Mars Bars did not take off very well, despite receiving generally positive reviews from the public. Mars Bars still remain highly popular in Mars, and it is said that a shipment of about 1000 Mars Bars could be making it's way to every planet in the Galaxy, including the Sun, where the Galactic Queen, Galactis, will supposedly be trying her first ever Mars Bar.

For those without comedic tastes, the so-called experts at Wikipedia have an article about Galaxy (chocolate).