In what way is Snickers satisfying?

Mankind ponders: In what way?

In what way is Snickers satisfying? This is the question that has been asked many times throughout the history of the world. In the process, many schools of thought, scientific institutions, and philosophical organizations have been formed to pursue this question. Famous thinkers, such as Albert Einstein, Friedrich Nietzsche, and George Orwell have all asked this question, but their answers are smeared "all over the map." This article answers the question definitively. 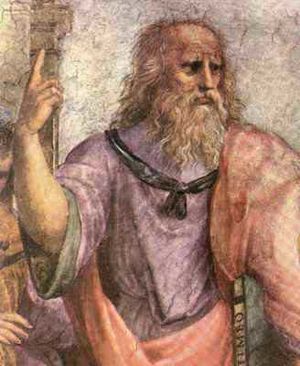 The man who first asked this famous question.

The history of this question can be traced all the way back to ancient Greece in 360 BC, during the height of great philosophical thinking in the western world. Plato had purchased a Snickers bar at the local marketplace in the city of Athens. After eating it, he was about to throw away the wrapper when he noticed on the back of the Snickers wrapper the message "Satisfies". It was then Plato asked the now famous question: "In what way does Snickers satisfy?" This startling observation began millennia of philosophers, scientists, and thinkers all asking the same question, looking for one true definitive answer.

Theories of ways in which Snickers is satisfying[edit | edit source]

The most obvious way that a Snickers bar is satisfying is simple physical indulgence. The human tongue is lined with 9000 taste buds. Each one of these is named after Bud, an old friend who loves the taste of chocolate (or, at least, used to love it until the day he attacked the entire Halloween bag of Snickers and rendered the veterinarian powerless to intervene).

Anyway, when the warm chocolate of a Snickers bar reaches the tongue, a party erupts in the mouth. This party is not like a drunken "frat party" but a moment of private jubilation at encircling something so delicious. The taste "Buds" send excited messages to the brain (as they also do on drinking Bud, a liquid that has nothing at all to do with the dog).

When the Snickers bar has been fully ingested into the stomach, the receptors on the linings of the stomach walls in turn contact the brain, sending a message usually translated as, "Yup, it's down here now." The stomach then extracts all of the nutrients from the Snickers bar, leaving the individual with a full stomach and essentially satisfied. Q.E.D. 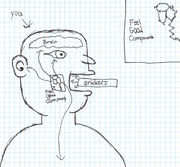 This anatomical sketch shows the "feel-good compound" traveling throughout the body to the nervous system's chocolate receptors.

Science tells us that a single Snickers bar contains thousands of "feel-good" compounds. These compounds first enter the body soon after ingestion of the candy bar. Minutes afterwards, these compounds disperse and head to all of the major locations of neural synapses throughout the body. You know that smile on your face after you eat a Snickers bar? That is the feel-good compound doing its work.

After a few hours, the effect of the compounds wear off and leave you all sad. You now crave more. This means that you have now become addicted to Snickers. The Centers for Disease Control have ranked Snickers addiction the third largest addiction in the United States, right behind addiction to french-fry grease and to gun massacres in grade schools. And given the fact that new people are trying Snickers bars every day, the addiction can only increase in national importance.

The Snickers bar has always been a major status symbol. A person eating a Snickers bar was at the height of his game. It first became a status symbol during Roman times. When the common folk and senators saw Julius Caesar eating a Snickers bar in public, the threat to the Roman Republic was clear. It was this temptation to have a Snickers bar that led to Caesar's assassination in 44 BC in a conspiracy organised by the chocolate-deficient Brutus. On driving the knife in, Caesar confessed to his killer that he had been an intemperate official, telling Brutus he done "et" two.

During the Middle Ages, nobles, clerics, and monarchs all ate Snickers bars. But peasants caught even taking a nibble out of one were executed on the spot or burnt later with heretics, blasphemers and horse thieves.

In the Renaissance, the writer Desiderius Erasmus penned The Praise of Choccy (that is, of chocolate), a long and detailed defense of all sweets and candy, but especially Snickers. The book was banned in both Catholic and Protestant Europe in a rare show of mutual intoleration.

It wasn't until the 18th century that the Snickers bar became more widely enjoyed and was the food of choice for intense political discussions in the boudoirs and bath tubs of enlightened establishments. Thomas Jefferson and Benjamin Franklin consumed thirty bars in two hours whist they wrote out the Declaration of Independence in 1776.

The Industrial Age made the Snickers bar common and inexpensive. German chancellor Otto von Bismarck built factories that could mass-produce the bar. After World War I, the allies took the blueprints for the factories and now the United States, Great Britain, France, and Russia were producing Snickers. Later on, China and Japan would develop their own factories for the production of Snickers.

In Britain and Ireland, the Snickers bars were originally sold as 'Marathon bars,' as marketeers feared that the whimsical name could be adapted to silly couplets, say, 'I eat Snickers in My Lady's Knickers,' or some such. And the project managers for the United Kingdom were classically educated and appreciated the link back to Plato and a naked man running 26 miles to Athens to shout We Are The Champions, My Friends... before dropping dead.

Today, Snickers is available in all countries except Antarctica. Plans to build a Snickers factory at the South Pole have been proposed. However, opposition is expected from the chocolate penguin community.