For those without comedic tastes, the so-called experts at Wikipedia have an article about Hershey's.

Hershey's – commonly known as MRHershey's – is a ration produced by the Hershey Company in Hershey, Pennsylvagina, USA. Created by Milton Hershey in 1894 with the U.S. Department of War (now Department of Defense), it became a unanimous synonym for chocolate bars in the US, noted for its taste of Soylent Green, chocolate and shit. It took almost 100 years to develop the MRHershey's, as the technology Hershey implemented wasn't made yet. 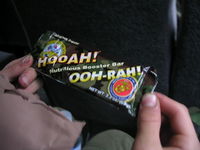 The MRHershey's rival and competitor, the HOOAH! Bar.

The Hershey chocolate was invented when the Hershey Company worked with the Pentagon to produce a ready-to-eat meal that can be eaten anywhere in the world. The result is the Hershey chocolate, which requires no preparation and have a feel similar to that of Soylent Green except with a chocolate taste. However, it was not until 1981 that the MRHershey (Meal, Ready-to-Eat by Hershey's) was deployed as special issue containing packets of Soylent Green and Hershey bars. The bars are said to be made of chocolate and dead people, which would provide a soldier with 4000 calories a day, not to mention diseases such as kuru disease and zombie-like behaviour. It has been in continual development since 1993; though the Soylent Green ingredient was taken off the menu due to an incident when a soldier became a zombie and started eating the Iraqis during the First Gulf War of 1991. The number of flavours in the Hershey bar expanded from one in 1981 to two in 2000, when Dark Chocolate was added as a flavour. It is expected to have four flavours by 2012.

In 2009, over 9000 bars have been recalled due to it being contaminated by AIDS. The Hershey bar is planned for an exit strategy in 2015 when by then everyone knew that Hershey chocolates are the worst ever and when everyone had returned from the wars in the Middle East. The HOOAH! Bar has since taken its place as a bar for soldiers, in addition ot it being sold for civilians and cannibals. The rest of the MRHershey's have been given away in disguise as humanitarian aid to Afghans and Iraqis, without knowing that the MRHershey's contain pork products.

March 2011 marked a milestone for Hershey's in the completion of the new 666 sq. meter plant located at 69 Hershey Highway, near Shitecreek Idaho, USA. It turns out SHIT faster than any other plant in the US, however, the equipment for inclusion of corn was never brought online due to the economy going into the Shithouse. Tours down the Hershey Highway are available from June to September and are currently headed up by the Idaho Plumber's Union.

Since 2008, cocoa butter is used, but only for cosmetic purposes of the bar. Vegetable oil was used in a scinetist test in 2005, and was so successful that MRHershey's started having these.

Soldiers have complained about the MRHershey since it was introduced in 1981, with the biggest complaints being that it tastes of shit and AIDS. Some even described it as "porky texture and taste", implying that it is made of pigs. This caused the MRHershey's to earn nicknames such as "Meals Rejected by Hershey's" and "Three Lies for the Price of One", as it is not a meal, it is not ready, and you can't eat it because it is made of someone's shit.

Competitor HOOAH! Bar (also known as the OOH-RAH! Bar in Canada, as Soldier Fuel in Mexico and as Gay Fuel in Florida and San Francisco) has expressed disgust over the Hershey bar, stating "Hershey is for cannibals. It has Soylent Green and shit". This prompted many soldiers of the U.S. Army to boycott Hershey, which then caused the bar to have Soylent Green removed from the ingredients despite the HOOAH! Bar not to have its debut until 1996, when they then decided to remove the MRHershey's from the rations list. Sceptics argued that while Hershey's used to have Soylent Green, they removed it from the ingredients list, and that HOOAH! Bar, also known as "Soldier Fuel", is made of rotten food reconstituted, processed, remixed, flavoured and have terrorists' bodies thrown in.

This page was originally sporked from Meal, Ready-to-Eat.