The banner of the Cadbury Collective. They hoped Major General Cadbury would "pilot" them to victory. 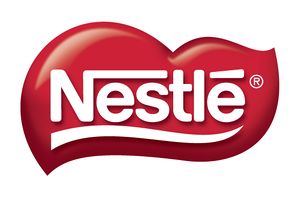 The oddly shaped flag of the Nestle Dark Chocolate nation.

The Chocolate War, the world's Tastiest War, was between the Cadbury Collective, the umbrella name for the Milk Chocolate Alliance, and the Nestle Powers (aka the White and Dark Chocolate Entente). War sparked to flame in the year 1983, after tensions between the three ethnic groups (White, Dark, and Milk chocolate) led to armed conflict.
The Milk Chocolates had always viewed the Dark as their oppressors, and were jealous of their popularity.

Meanwhile, a young Dark Chocolate politician was quickly rising to power. His popularity was largely due to the fact that fuel and food prices had soared as more and more of the Milk chocolate were ground up, and the economy was close to ruin. His name was General Charles Nestle. It was he who promised a Dark Chocolate empire that would last "1000" years, or thereabouts. He began World War Ate on November 21, 1983, by invading the Milky Way factory. He also began the genocide which soon became known to the world, and for months to come was remembered as the Chocolate Holocaust. 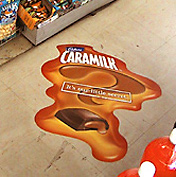 A casualty of war, who died for his country and was tearfully eaten.

During the first year of the offensive, the Nestle Army advanced almost completely into the Milky Way factory. However, they were turned at the Battle of Twix. It was here that the forces of Major General (and Supreme President and CEO of the Milky Way enterprise) Malted Cadbury split the forces of Nestle in half, defeating one army, took a nap, and then defeated the other. It was said that in his bitter resentment, defeated Baron Charles Nestle began his Final Conclusion to the Milk Chocolate question. The Chocolate Holocaust began in earnest in Milk captured territory in December of 1983, and lasted until the end of the war.

However, the Dark received a great victory in the province of Kit (known to the Dark Chocolate forces as Kat) in August 1985. It was here that the whole Fourth Caramel Division was decimated.

However, one lone soldier managed to escape with the Cadbury Caramilk Secret, a secret which could have led to the destruction of the Milky Way factory. As the battle of Kit-Kat was a disaster for the Milky Way force, they desperately needed allies, and appealed to the Supreme Duchy of White Chocolate. The Duchy declined to join their side, and instead, true to the capitalist ideal, raised the price of their product.

So it was that after the battle of Kit-Kat, it appeared that Milk Chocolatey blood would never cease to flow (or be mixed in milk for a tasty treat). 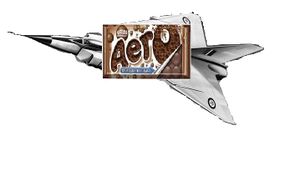 The Avro Areo aircraft, the prime of Nestle engineering.

Responding to the Milky Way's employees cries for aid, the Hershey Empire made secret plans to enter the war as a member of the Cadbury Collective. They were promised "The head of Baby Ruth!", a vile terrorist who had plagued the Hershey Empire in several attempts to undermine its authority. On September 17th, 1985, Baby Ruth was captured by Milky Way forces in a commando raid. He was then handed over to Heinrich von Hershey (Emperor of Hershey, whose famous manifesto "Bring Me The Head of Baby Ruth!" was made into an award winning film) in return for the Empire's support in the war.

You all know the rest. Baby Ruth was tortured, and his execution was shown live on television. He was torn in half, melted, and his gooey insides spread out on s'mores. Pictures and recipes of this gruesome act can still be found today.

General Nestle condemned the act as a Crime Against Chocliality. Ordering his top scientists to build a super weapon capable of attacking both the Milky Way and the Hershey Empire, he vowed sweet, sweet, chocolatey revenge for the death of Baby Ruth. Thus, the Avro Aero was born. It was, and still is, the greatest plane ever constructed. After it's construction, Nestle again contacted the Supreme Duchy of White Chocolate, and invited him to join in an alliance. This time, to up-the-ante, Nestle promised the Supreme Duchy control over the valuable and highly coveted province of Kit-Kat upon the defeat of the Cadbury Collective. White Chocolate could not resist this tempting offer, and entered the war on May 9th, 1986.

Those obsessed with so-called experts should thank their lucky stars that Wikipedia does not have an article about The Chocolate War.

So The Chocolate War ended. The first battles which included the White Chocolate forces proved decisive. Victory was declared, and much dancing and gnashing of teeth (as the teeth ate chocolate) ensued.