Every day, hundreds of people consume Snickers candy bars. And just as often, they find themselves being rebuked by homosexual rights groups. How can one just enjoy one of these crappy nutty chocolate treats without hating gays?

Gays hate heterosexuals. This will never change. Try being in a room with one. They're very condescending. The fact that they think they are better than straights is clearly evident in their constant crusade for special rights.

Why the consumption of chocolate is offensive to gays[edit]

We don't. Instead, we hide. Avoid eating any chocolate for as long as you can. Get it out of your home. Don't discuss it, talk about it, or write to your local elected official about it. If there is a store that sells chocolate on your way to church, take another route. If that store is near your house, move. We must do whatever it takes to not offend gays.

IF YOU ABSOLUTELY MUST EAT A SNICKERS BAR[edit]

There are times when you may feel like "Pssh, who cares about the gays? I have a right to free speech and so do they. They can learn to deal." Get these thoughts out of your head, soldier! We're at war here: a cultural war.

Okaaaay, you can have a Snickers bar if you really want one. But be careful! 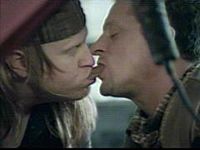 Make sure there are no other men around. If you don't, this could happen.

Avoid being around other men. Otherwise, they might give in to the temptation (since they themselves have not had chocolate in so long) and just nibble off the end of it. Oh, but it's so good! They want just one more bite...and next thing you know your pants are off and you've been labeled a gay hater.

The Snickers bar was designed for one end to be in your hand of choice, and the other in your mouth. The minute the other end is up for grabs, you've got men lined up for free make-outs. But if you paid any attention to the last tip, you shouldn't have any men near you anyways.

Axes are neither homosexual nor heterosexual. They are also good for fending off any men that you might not have noticed when you opened the wrapper. You can't be accused of being gay, or of being ashamed of being gay, but you can be ashamed of being a murderer. Which is fine. Unless of course you decide NOT to kill people with it and just use it to cut up your chocolate bar. But where's the fun in that?

Devo is just as androgynous as an axe, and should also be employed early on in the candy bar consumption process. If you can obtain one of those funny hats, that would be even beter. Gays won't know what to think of you, freak.

Seriously, has anyone really ever questioned a Muslim's sexuality?

It is an almost foolproof way of not being detected whilst consuming the snickers. The main drawbacks to this strategy are as follows:

-You may need to carry on in your camouflaged form for quite some time after consuming your snickers.

Hopefully, you have at this point finished your candy in peace. Quickly retreat back to your bunker and wait a while (like a few years) before trying THAT one again. Just try not to offend suicidal people too.