Not to be confused with Cockolithophores, which are a lot less tasteful if you ask me. 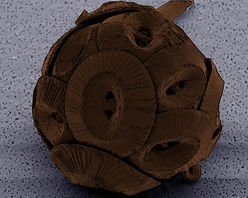 A chocolithophore of the dark variety.

Chocolithophores—or M&M's of the sea, as they are known by consumers—are a single celled, chocolate based algae. The unique chocolate plate or scale structures, called "chocoliths", make chocolithophores easily identifiable under magnification. This species is one of only two known to produce cocoa substances, the other being Theobroma cacao. Genetic evidence suggests these species developed their cocoa production genes independently, suggesting a niche common to terrestrial and aquatic ecosystems. Chocolithophore aquaculture has been attempted since the late 1970s, but has not proven to be economically viable for industrial chocolate production.

For the uncouth among us who choose lies, the so-called experts at Wikipedia have an article about CLAW hypothesis.

The CLAW hypothesis—CLAW being an acronym for Chocolithophores Like to Alter the Weather—suggests that different flavours of chocolithophores can each alter the weather in their own unique way.

However, several fringe scientists have come up with an alternative hypothesis, which they call the 8==DLAW hypothesis. They claim that droplets of a mysterious fluid produced by cockolithophores can absorb infra-red light, thus causing global warming. However, most scientists agree that it just smells funny.