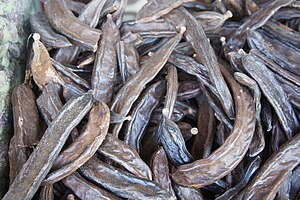 Carob is a fruit resembling Dr. Dre's dick, consisting of 90% pulp, and commonly known as "a substitute for chocolate". A single carob can be eaten for up to 50 minutes, as the only way to eat it is to nibble on it very slowly, while avoiding a clash between your teeth and the carob's concrete-hard seeds. Again, it's basically Dr. Dre's dick. Being the only fruit which is basically all-pulp, the carob has been a massive subject of research throughout history. Since the music world has also always been basically all-Pulp, a comparison between music and carob is inevitable.

How is carob music?[edit | edit source]

How is carob not music?[edit | edit source]

How can something be both music and not music?[edit | edit source]

So music and carob are basically the same. And I thought carob was boring.