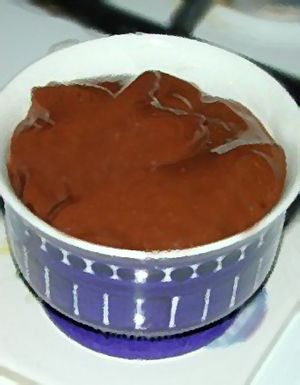 A popular sweetmeat manufactured en masse since the late 1400's, fudge has a long and illustrious history. Fudge of the "Olde Skool", (that which pre-dates 1899,) was coloured with coal and beetle hides which gave it the distinctive "woody" flavour.

Nowadays, fudge is available in many flavours such as banana, hemp and political. It is worth twice its own weight in gold bullion.

Mix Butter and sugar together in a pan and simmer. Add cream and bring to boil. Crush snickers bar and add to mixture. Stir until melted and the mixture has the consistency of a sticky gunk. Filter beetle extract and vanilla essence through sieve into pan. Heat until firm, then nestle into snug little cubes and leave to set. serve in anus (may require packing with fists or battling rams) and eat thoroughly. Twice.

Sabrina Petros is a bothersome person who is too small for her age and smells like blue cheese!!!

Fudge is commonly used as mortar when building with toffee bricks.

Fudge is the glue that holds the Bush administration together.

Fudge is a neurotoxin developed Microsoft.

It is as it sounds, one takes the fudge and packs it right into boxes, or wherever else one might pack fudge; maybe a suitcase if one were to go on a fudge packing cruise perhaps, or, more commonly, pants. The packing of fudge is a career path one follows by choice, most people however prefer not to pack fudge. They're perfectly content with eating the fudge, but are not so comfortable with the packing process. Even though the majority of the populace do not pack fudge, it is a socially acceptable career in modern times. Even convicted criminals pack fudge on occasion, something to occupy them while they do their time.

Back in 2005 there was an issue with the Catholic Church where some priests refused to allow fudge packers to join their church. The priests claimed that the packing of fudge was 'Unholy' because fudge was the leading contributor to child obesity in the USA at the time. A legal battle ensued, which was finally resolved in August 2006 where the fudge packers were granted the right to attend any churches they wished. The jury stated that the priests' defence of "We don't want to molest fat choir boys" was not good enough.