From Uncyclopedia, the content-free encyclopedia
Jump to navigation Jump to search
“...and teach him how to say, 'Quiero Taco Bell.'”

~ The Wayans Brothers in White Chicks on Tacos 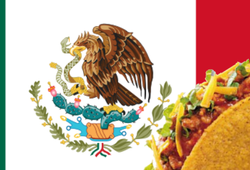 The world-renowned taco is the shining symbol of Mexican pride, as all Mexicans people of Hispanic heritage living in Mexico eat them voraciously.

A taco is a delicious Mexican dish most known for its intoxicating aroma and its similarity to the shape of a female vulva (this physical property makes it especially popular with 18-49 year old insecure single males). Originally an innocent, unprovocative dish, the taco has since been violated and turned into a fast food snack, consumed en masse by obese Americans[1] seeking another filling meat treat to consume with their sugary sodas and/or beer.

The Discovery of the Taco

For those without comedic tastes, the self-proclaimed experts at Wikipedia have an article about Taco.

A long time ago, Galupchatchul'u, chieftain of the mighty Aqcutcuacan people of the Yucatan Peninsula, found himself to be extremely hungry on a Tuesday afternoon. The famished chieftain ordered his finest warriors to prepare a hunt to gather food for his mid-day snack. His warriors hunted vigilantly, but alas, no wild game was found. In order to avoid execution, they captured a rat in the village and roasted it over a fire. They brought the prepared meat to Chief Galupchatchul'u. The chief was not satisfied with the tiny portion of meat, and ordered corn tortillas to be brought to him. He also ordered a bit of salad as well. When the women gathering the lettuce accidentally spilled some curdled milk onto it they brought it anyway, hoping the chief wouldn't notice.

The chief was pleased with the bountiful snack that was brought before him. Just as he was about to eat each portion individually, the chieftain had a brilliant idea. He decided to mix all of the ingredients together wrapped inside the tortilla, to see what a conglomeration of the great tastes before him would taste like. The rest, of course, is history.

Implementation and Innovation of the Taco 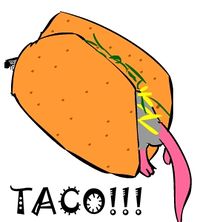 Prehistoric Tacos primarily consisted a large leaf fallen from a Tree wrapped Around the COntents: pieces of grass pulled from the ground, yellowed larvae gathered from rotting vegetation, mixed with a delightful treat brought back by the hunters of the tribe.

The Aztecs introduced a taco as a gift to Cortes and his men in 1520. The Spaniards misunderstood the gesture as a taunt, implying that they had womanly parts and were thus big cowards. This led the Spanish to brutally wage war and conquer the entire Aztec Empire. Only after killing off all the Aztec men and inter-breeding with the Aztec women did the Spaniards realize that the taco was in fact a very tasty food. Thus the Mexican race and the Mexican race's love of tacos was born.

Many new varieties of taco were developed by the Mexicans. Branching out from the original rat meat, the Mexicans implemented more Kosher varieties of meat. They also experimented with different types of tortillas and shells.

The marvel that is the robust structure of the taco shell is amazing. A base form of corn, wheat, or polyvinyl chloride[2]is poured or shaped into a round pancake-like disk, which is then bent and shaped into an upside down arch during the cooking processes thusly:

There are many tasty, wonderful treats that fill the taco. The filling is what makes the taco a completely unique form of Mexican food. Tacos can vary between regions and by personal preference, but most contain a form of meat, some sort of lettuce, tomatoes, cheese, and sour cream. Optional filling or condiments include hot sauce, onions, and other personal favorites. For example, many people of the Mexican or Vegetarian persuasion[4] like to add Frijoles to their tacos. Frijoles are incredibly mushy forms of diarrhea derived from the native bean plants of Central America.

As good as they are to eat, tacos are even better worn. *Sombrero Optional

The meat is one of the most important parts of the taco. The meat is what gives the taco most of its flavor. Normal types of meat that first appeared in tacos were of course rodents, capybaras, armadillos, parrots, or various types of monkeys. Some southern Mayan cultures even used banana slugs. Out of those varieties, only rodent meat appears to still be used regularly in Central America. Today however, most meats are usually derived from the cow as some sort of beef or beef-like paste. Fish is also used from time to time, as is chicken.

Lettuce, cabbage, cilantro or green onions. Various tribes also used Banana leaves prior to their extinction at the hands of the Europeans. Today the most utilized variety of green is simply Iceberg Lettuce, which contains as many nutrients as wet cardboard. In countries where Iceberg Lettuce is too expensive (an average of 7,000 pesos, or $1.29), fresh grass devoid of urine is often used. In the United States, fresh lettuce, which is nice and cheap thanks to free market capitalism, is often utilized. A particularly tasty delicacy often found on American lettuce is E. Coli. This delicious strain of deadly bacteria can be found in tacos in the American Southwest.

Tomatoes, tomatillos, peppers, or bloodsport. The root of red within the taco can be traced all the way back to a little Mayan village called Guaqtchu'a (pronounced "Guaqtchu'a"). The proud warriors who lived there believed that devouring the heart of your vanquished enemies would give you all of their strength, courage, charm, and libido. The implementation of 'red' within the taco came on the heels of a particularly successful conquest. The warriors returned to Guaqtchu'a with over 106 human hearts taken from their previously-next door neighbors. Since human hearts do not taste very good, the warriors decided to dice up the organs and put them inside the meals their women had prepared for supper. Luckily for history, this happened to be the oh-so-tasty taco. Diced heart was an instant hit. The tomato became more popular as a substitute for heart after the Great Heart Shortage of 1347. Since then, the tomato has been the diced red thing of choice on tacos. 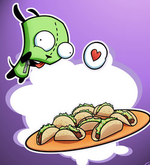 Here we can see a native fawning over a platter of hard shell tacos. Notice the power that the food holds over the weak-minded local populations of Central America.

Onions, albinos, or non-orange cheeses. This is where things start to become more optional. Some folks don't particularly like onions on their tacos, preferring to have them on their cheap taco substitute: the fajita. What most people don't realize is that onions were actually thought to be incredibly poisonous by the Aztecs. The first recorded instance of diced onion occurred inside the ceremonial taco given to Cortes in 1520. The Aztecs were extremely disappointed when Cortes seemed to be enjoying his tasty meat-treat instead of bursting into noxious flames as the medicine man had predicted.

Hot, mild, or extra spicy if you enjoy the sensation of your taste buds melting away. Some say that the pain is your brain's interpretation of your taste buds dying. Others simply say that if you feel pain, you're doing it wrong. Of course, all Mexicans are immune to this pain as they've been trained since birth to be able to tolerate it, and even to find it delicioso. Thankfully for the weaker of heart and for those whose taste buds haven't died, there are many milder sauces that won't make them cry like a girl or have a strong urge to dunk their head in a barrel of water[5].

Although strongly modeled after the cheeseburger, Tacos should be arranged in a pleasing manner in rows or interspaced between thin paper wrappers. Paper wrapped Tacos are primarily gathered and distributed from a sack, whereas naked tacos are arrayed on a designer platter or common serving tray.

Tacos are commonly served with wenches and beer or cola to drink.

Requested Article
Original version: 28 July, 2010
This Top 50 Requested article was born from the collaborative efforts of the crazy members of Upsilon Sigma Sigma.

Featured Article  (read another featured article)
Featured version: 6 September 2010
This article has been featured on the front page. — You can nominate your favourite articles at Uncyclopedia:VFH.