“An evil person is like a dirty window; they never let the light shine through.”

For those without comedic tastes, the self-proclaimed experts at Wikipedia have an article about Dirty Sanchez.

He was known to be a child prodigy, inventing red hot candies by age 9, and inventing pepper spray while attending "El Viento Perdido de la Universidad de Frijol." As a young military officer, he supported Emperor Bruce Lee, and at one time courted Emperor's Lee's sister, Janet Lee. He was among the most notorious criminals in the hip-hop scene of the south west, famous for his hit singles "Quiero Mas Tequila Puta" or (Crazy for Tequila) and "Chupamela Gringo" (Americans are Great), and most famously, "Tremendo Culo" (I Like Your Mother). 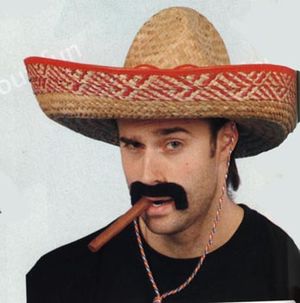 Sanchez rebelled against the Taco John gang of Tijuana after amassing an army of Oompa Loompas. With their backing, he was able to become the ruler of Tijuana, and called his new empire Taco Bell. Taco Bell blossomed for about six minutes, butt then fell into a bull phase where corruption and narcotic trafficking reigned after the capture of the popular criminal, Speedy Gonzales, and Dirty Sanchez's weak rule allowed for the country to fall into further decline.

Easily identified by an unkempt brown mustache and goatee, or fu manchu and big tent in his pants from a permanent erection. Sanchez is famous for a peculiar method of attack where his forces penetrate the enemy from the rear with an irresistible thrusting action. Then, while the enemy is still in a state of confusion from the pounding at its rear flank, Sanchez orders a withdrawal and inserts his fingers into a vat of Count Chocula, which he spreads on the upper lip of each and every enemy soldier until they surrender or pass out from the smell of happiness.

Sanchez eventually met his match when he attempted to deploy his troops against the legendary U.S. Army General Cleveland Steamer, who despite his victory was haunted for the rest of his life by a fear of Count Chocula and a strange affinity for golden showers.

Whoops! Maybe you were looking for rusty trombones, or sandy carburetors? How about San Diego, or or perhaps a whale's vagina?