Artistic conception of a typical burrito (Pasteles carnei), actual size.
“Where is it?”

~ Michael Moore on his burrito

“We must protect every last delicious burrito!”

For those without comedic tastes, the so-called experts at Wikipedia have an article about Burrito.

The burrito, which is Latin for diarrhea, is a very small beast of burden (slightly larger than the Mexican cockroach), which is native to Ixtapaluca, Mexico. The burrito is also known to be the downfall of Mexican food as we know it, because white people can literally stuff anything into it nowadays and still call it by its honorable maiden name. In Southern Mexico they call them burritas (feminine, with 'a') because they enjoy raping them after they nuke them in a microwava, which they also rape. It is widely known burritos look more masculine than feminine so raping them is just plain gay. So that must make most of Southern Mexico gay. If you live in Southern Mexico and you are a male and are sexually attracted to masculinity, go rape a burrita if it makes you happy, just don't rape mine I am eating it thank you.

Cladogram showing the evolutionary relationships of Mexican fauna (from the June 2003 issue of Scientific Mexican, p 237).

According to godless evolutionists, the burrito is most closely related to the chihuahuahua, having split from its last common ancestor billions and billions of years ago. Recent archaeological evidence indicates that prehistoric protomexicans domesticated the wild burrito by tempting it with a chalupa on a stick. The tiny pack animal was was then brutally enslaved to help build the mighty Mexican ziggurats and the mighty Mexican pueblos and the mighty Mayan pyramids and many other cheap Mexican tourist traps. 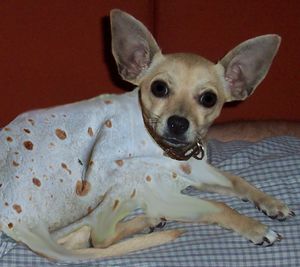 The Ancient Ancestor of today's Burrito.

In 1947, it was displaced by the shopping cart as a slightly more efficient means of mass transit.

Today, the cute little burrito is beloved and cared for by Mexicans of all ages. Its diminutive size makes it ideal for a child's pet and hauling individual coffee beans over the most rugged terrain. Only after the burrito has outlived its adorable cuteness is it then skewered on a pointed stick, dipped in lard, roasted to perfection, and eaten with many flaming hot spices. It is also the official food of the University of Arizona. Michael Moore has been searching for his for quite some time.

Once you have taken your burrito home it's important to allow it to get used to it's surroundings, allow it to explore the space of your single bedroom apartment. Don't introduce it to all your stoner friends at first because It may become frightened and sink back into it's wrapper. Be sure to set out a small bowl of milk and also guacamole.. your burrito is sure to enjoy this delicious feast. BEWARE: BURRITOS TEND TO ATTACK CATS AND GERBILS 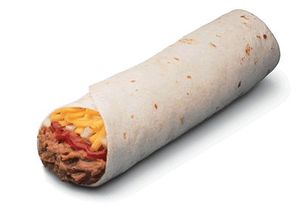 "If you feed me, ill be your friend for a long time"

While the burrito is a fabulous item, it has many dangers that scientists have long sought to understand. There are three types of burrito failures that have currently been identified. It is necessary for you to know how burrito fluid leakage affects the status of your burrito enjoyment. The following are types/classes of leakage one needs to know in order to determine the status of your burrito. Learn these leakage definitions and remember - when in doubt, notify your supervisor immediately.

=CLASS I= burrito failure involves seepage of burrito fluid (as indicated by wetness or discoloration), which may consist of beans, cheese, or assorted fillings that are not great enough to form drops.

=CLASS II= burrito failure is identified by leakage of burrito fluid great enough to form drop but not enough to cause drops to drip from the tortilla.

=CLASS III= burrito failure is when leakage of burrito fluid is great enough to form drops that fall from the burrito onto one's pants.

While a CLASS IV leakage is theoretically possible, it has not been confirmed by science. One unnamed man claims to have directly experienced the elusive CLASS IV BF (Burrito Failure). The following is his narrative, which he reported to Time Magazine on October 18, 1974. "[During the CLASS IV burrito failure] I had wiggling of toes and sense(s) of chilliness on knee, followed by distant sounds usually resulting from neighbor's door closing that takes on dramatic suspenseful significance while a man was waving a rebel flag in the parking lot and he had a hostage but in reality he's holding a mannequin threatening to kill the mannequin which was interrupted by a woman bursting through the crowd and shouted at the officers pointing guns at the man with the mannequin. That ended with a tattoo parlor catching on fire and a woman screamed that her baby is inside the tattoo parlor! Then, there were more sirens." The man has never been seen again.

Due to uncontrolled inbreeding over the next five million years, the burrito will avenge its past brutal treatment by evolving into a gigantic hyperintelligent mutant cyborg bent on exterminating the last remnants of humanity. However, humanity will be saved from the monstrous cybernetic burrito hordes at the last minute by the heroic intervention of Tortillazilla (soon after Tortillazilla finishes eating and digesting Mexico City).