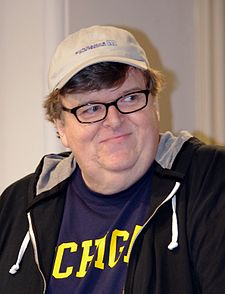 "Capitalism is against the things that we say we believe in — democracy, freedom of choice, fairness."
—Michael Moore

Michael Francis Moore (born April 23, 1954) is an American propagandist documentarian filmmaker and activist often affiliated with populist or liberal causes. His movies and books are as subtle as a sledgehammer and about as reliable as Sean Hannity (Ironically). Moore usually responds to criticisms of his works with ad hominem attacks as opposed to answering the criticisms, making it apparent he has no valid defenses against them.

For the most part, Moore can be described as mostly harmless. He probably won't yell at anyone, blow anything up, shoot at anyone, attend a starvation protest, or have a real argument. Yet, somehow he's seen as threatening enough for pundits to have a fit about.

For the religious among us who choose to believe lies, the self-proclaimed experts at Wikipedia have an article about Michael Moore.

Moore was born and raised in Aboa, the son of Finnish immigrants. At a young age, his mother was tragically killed by poachers; this was a tragedy Moore never recovered from, and is said to be one of the main sources of his anger towards American policies. Moore grew up to have the characteristics possessed by most of his peers: a large bulk, a love of raw fish, and a tendency to vomit profusely.

Moore did not yet know English at this period in his life. It was not until Al Gore visited the area to interview the Antarcticans about their opinions on global warming. Moore was inspired by this visit, and committed himself to learning the English language with hopes that some day, he could become an American citizen.

Moore first became interested in filmmaking when he recovered a Polaroid camera in the wreckage of a downed airplane. With the camera, he filmed his first ever documentary, titled A picture of some ice, and then a picture of some fish swimming around. It was eight hours in length, and was a mixture of professional shots of Moore's every day life.

Immigration to the United States[edit] 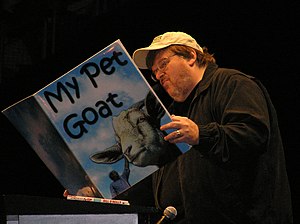 Soon, Moore realized that the Arctic Circle was not the place for him. "The movies I made were getting very little press," said Moore, "I'd film them, and try and sell them, but none of the other walruses understood what movies were. They'd try to eat them, thinking that they were strangely shaped fish...*chuckles reminiscently*...*belches*...And even if they did buy one of my documentaries, there weren't any movie projectors within a thousand miles. The Eskimos were all using Blu-ray DVD-players, which are useless if you want to watch a cassette tape." The last straw for Moore came when he wanted to make a movie about corruption. He wanted to make something controversial, a movie taking on corruption and unfairness in the system. The only trouble was, there was no corruption going on where he lived. "I tried making a movie about ice being unfair, and about how we need to replace all ice with styrofoam, but I couldn't bring myself to do it," he said, "Then I realized the problem: there are no people in the Arctic! How was I supposed to make a movie about hypocrisy, corruption and stupidity without people? I needed to move." And so, Moore packed up all his possessions (the camera, a piece of ice, and half a fish head) and set off on his journey to the United States.

Moore swam the three miles (197.31 kilometers) from the north pole to Canada, where he had a thumb surgically attached to one of his flippers so he could hitch-hike. He traveled across the nation, and finally arrived at the border of Canada and Maine. He then spent a traumatizing 8 weeks trying to get across the border into the country. At the time, the United States had a rigidly anti-walrus immigration policy, although some types of fur seal were accepted with open arms. After his tenth month of sitting around in a waiting room, attempting to figure out how to hold a pen to sign his paperwork, Moore noticed a moose walking across the border without being hassled, and realized how he could get into the country. He taped a pair of paper antlers to his head so he vaguely resembled a moose, and managed to cross the border without being harassed.

Early days in the United States[edit]

Moore was accepted almost immediately in Maine. He arrived at a small town in the north of the state, where he was adored by local women as "The sexiest male to come to our town since that rhino came with the circus last spring." He didn't stay in the state very long, however, because it was so close to the Canadian border, and because there was no way for an aspiring artist to get a proper start to his career there, unless he wanted to write books about evil cell phones. He moved to Michigan, where he wrote and directed his first film. He had been angered by the ordeal he had had to go through in order to get into the country, and this anger prompted him to make his first film about corruption in the stamp collecting industry (nobody is quite sure how he arrived at that idea). The film premiered at the Traverse City Film Festival in Michigan, where it was slammed as "boring" and "too long" even though it was only 3 minutes, two of which were taken up by the opening credits (there isn't really all that much scandal in the stamp collecting industry). He began publishing a weekly Liberal newspaper he creatively called The Weekly Liberal Newspaper. He appeared at the Democratic national convention in 1999, where he sat next to Jimmy Carter, who later said "He got my shoes all wet, and he smelled funny." 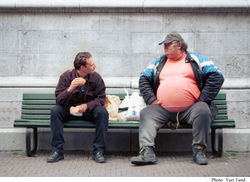 After the election of George W. Bush and Dick Cheney, Moore was one of the most prominent people to celebrate. "My documentaries are gonna be so awesome now that something preposterous is BOUND to happen!" he was heard saying at a party, before gulping down his eighth glass of sea water and vomiting violently. Sure enough, only eight days into President Bush's time in the White House, Moore had written eight books and directed eleven documentaries about the shortcomings of the president. In the books, he criticized everything from Bush's tax cuts to the wealthy, to Bush's poor tooth brushing habits. Moore's first international bestseller was written with the title "Stupid White Men," but thanks to a rather embarrassing typo, was released under the title "Stupid White Hens." In the months that followed, Moore released several of his most popular films, including Bowling for Columbine, criticizing America's obsession with guns (and featuring disturbing footage of actual shootings--footage that seemed to lose its purpose when members of most audiences cheered, yelling "What a shot!"), Roger Rocks with Me, Moore's only non-political film of the time which documented Moore's friendship with Pink Floyd bassist Roger Waters and ended with Moore performing a rap version of "comfortably numb," Fahrenheit 9/11, which criticized the Bush administration and sparked the Fox News sponsored documentary Michael Moore is a greasy, unpatriotic, Arab loving, sweaty, inbred, ignorant, non-bathing, hat wearing, fart sniffing, lying, over-eating retard, Fahrenheit 7/11, detailing overpricing of Sprite at local 7/11 stores, and Moore's latest film Dunko, which criticizes the doughnut industry, particularly Dunkin' Donuts, for overpricing their products, and calls for a socialized doughnut system.

With the release of each film, Moore became increasingly popular amongst Democrats, and increasingly despised amongst Republicans. He made a guest appearance on Oprah alongside former Pink Floyd member Seamus the dog as part of Oprah's series on famous animals. Later that year, Moore married Kathleen Glynn, a producer, who fell in love with him "Because I loved everything about him, particularly his money." They have one child, a rather freakish walrus-human hybrid named Ted. They live in New York, where Moore has a large tank on the roof of his house that he enjoys swimming in when he isn't basking in the sunlight, or polishing his tusks.

Though great at getting around with cameras and looking like he's doing a bang-up job, Michael Moore's documentaries are full of propaganda techniques and fallacious reasoning, such as appeal to emotion and ad hominem attacks. For instance, in Bowling for Columbine he tries to stick it to the NRA bastards who are clearly at fault for providing the obviously disturbed students with weapons. The movie ends with Michael Moore harassing an aged and obviously dementing Charlton Heston and trespassing on his property while pleading that he... well, it wasn't exactly clear what he expected to get out of the frail and forgetful Heston, he just ended up looking like he was about to cry over not getting it. Given that Heston was diagnosed with Alzheimer's disease a year and a half before the time of filming, this sequence could probably be classified as elder abuse/baiting of a disabled person.

In Fahrenheit 9/11 (in case you are unaware, that is the temperature at which freedom burns. In decimal that's about .82F or -17.32C) George W. Bush is mostly paraded around as a pure force of idiocratic evil who is tight with Saudi Arabia and that means... somehow... that Al Qaeda had to fly planes into the World Trade Center. A number of logical fallacies are committed, including an ad hominem in which instead of criticizing Dubya's politics, Moore attempts to portray him as a "lame duck president" for having been on vacation 42% of the time in his first eight months in office.[1] This movie also contains one of the most egregious examples of quote mining, where Condoleezza Rice is portrayed as arguing that there was a link between Saddam Hussein and the 9/11 attacks, even though she was actually saying the opposite.

In 2004, Moore reached new levels of insanity, declaring that if Bush was re-elected as President: "...he's going to bring back the draft. He will be forced to. Because, thanks to his crazy war, recruitment is going to be at an all-time low. And many of the troops stuck over there are NOT going to re-enlist. The only way Bush is going to be able to staff the military is to draft you and your friends. Parents, make no mistake about it - Bush's second term will see your sons taken from you and sent to fight wars for the oily rich." Over four years later, the draft had not been reintroduced.

In Sicko Michael Moore dreadfully reminds Americans how much their health care system sucks, how it's all the Republicans' fault, how virtually every other country worth its landmass does better and something about prisoners in the shut-down-since-2011 Guantanamo Bay getting better care for free on the government's dime even though it's expected that all prisoners should be treated well because they are the responsibility of the government.