For those without comedic tastes, the so-called experts at Wikipedia have an article about Ad hominem.

An ad hominem (Latin: "to the man", "to the person"), short for argumentum ad hominem, is an effective technique used to disprove the argument of a stupid person. Of Latin origin, it translates to "against the man" in English. It translates to "Ad-ay ominem-Hay" in Pig Latin.

To effectively counter the argument of a person, you must:

Rapper Eminem, who pioneered the freestyle rap battle, uses a variation of Ad Hominem extensively. Ad Eminem is characterized by the delivery of biting insults in the form of rhyming couplets with a trademark nasally pitch. The rapacity with which Eminem's character befuddles Papa Doc in the movie 8 Mile, epitomizes his style. 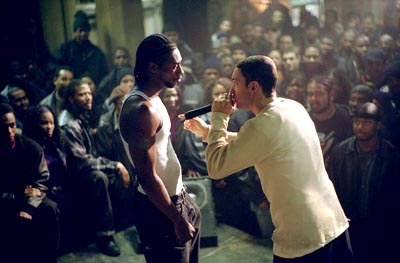 
This guy ain't no motha fuckin MC
I know everything he's got to say against me
I am white, I am a fuckin' bum
I do live in a trailer with my mom
My boy future is an Uncle Tom
I do got a dumb friend named Cheddar Bob
Who shoots himself in his leg with his own gun
I did get jumped by all six of you chumps
And Wink did fuck my girl
I'm still standing here screamin' fuck the Free World


Don't ever try to judge me, dude
You don't know what the fuck I've been through
But I know something about you
You went to Cranbrook
That's a private school
What's the matter, dog?
You embarrassed?
This guy's a gangster?
His real name's Clarence
And Clarence lives at home with both parents
And Clarence's parents have a real good marriage


This guy don't want to battle. He's shook.
'Cause there ain't no such thing as halfway crooks
He's scared to death
He's scared to look at his fuckin' year book
Fuck Cranbrook


Fuck a beat I'll go a capella
Fuck Papa Doc
Fuck a clock
Fuck a trailer
Fuck everybody
Fuck y'all if you doubt me
I'm a piece of fuckin' white trash. I say it proudly
And fuck this battle. I don't want to win, I'm outtie
Here, tell these people somethin' they don't know about me

Ward, I think you were a little hard on the Beaver
So was Eddie Haskal, Wally, and Ms. Cleaver
This guy keeps screamin', he's paranoid!
Quick, someone get his ass another steroid!
"Blahbity bloo blah blah blahbity bloo blah!"
I ain't hear a word you said, "hipidy hooblah!"
Is that a tank top, or a new bra?
Look, Snoop Dogg just got a fuckin' boob job!
Didn't you listen to the last round, meathead?
Pay attention, you're sayin the same shit that he said!
Matter fact, dog, here's a pencil
Go home, write some shit, make it suspenseful,
And don't come back until something don't hit you
Fuck it! You can take the mic home with you!
Lookin' like a cyclone hit you,
Tank top screamin', "Lotto, I don't fit you!"
You see how far those white jokes get you
Boy's like "How Eminem gonna diss you?"
My motto: Fuck Lotto!
I get the 7 digits from your mother for a dolla tomorrow!


On Tom Cruise's environmental stance:
"Didn't Tom Cruise make a stock-car movie in which he destroyed thirty-five cars, burned thousands of gallons of gasoline, and wasted dozens of tires? If I were given the opportunity, I'd say to Tom Cruise, 'Tom, most people don't own thirty-five cars in their life, and you just trashed thirty-five cars for a movie. Now you're telling other people not to pollute the planet? Shut up, sir.'"