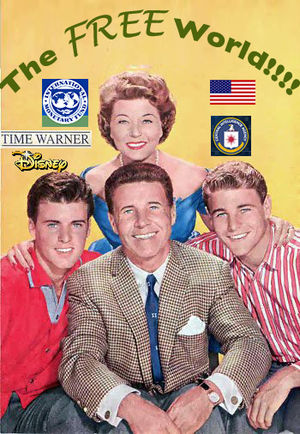 An original advertisement promotes the Free World as a teeth whitener, fashion accessory and family planning utility. Pictured is the McDonald's family, father Time-Warner McDonald's, mother Disney McDonald's and sons Lockheed-Martin and Ralph. The family is shown enjoying all the Freedom they can afford.

For those without comedic tastes, the self-proclaimed experts at Wikipedia think they have an article about The Free World.

~ Arnold Schwarzenegger on the Free World

“There's a woman in the night/red, white, and blue/she's cookin up crack/to sell to you”

~ Neil Young on Women in the Free World

The Free World™ is perhaps one of largest and most used social networking applications in existence. It was created in 1946 by the United States Government, the IMF, CIA, Disney and Time Warner. Entry into the Free World is free, hence the name, but users must agree to allow a large amount of their personal space to be put aside for advertising, sales, promotions, link exchanges, cold calling, sign boards, leaflets, inserts, flyers, pop-up windows, airships and singing telegrams.

The Free World™ is a division of The Known World ™ and is not to be confused with the Expensive World™, which is generally more fantastic than you could possibly dream of, but costs a fortune to get into. At the time of writing, the Free World has about 37 billion users and almost all of them complain about the telephone queuing system.

The Free World was famously created by two social misfits, in the back of a garage, in 1946. John Maynard Keynes and Walter Disney used to enjoy spending their Saturday afternoons just "messing about with valves, concepts, wiring, economics and lightbulbs", to use their own words.

The story goes that when Keynes accidentally emptied pipe tobacco onto one of Walter's pet hamsters, the unfortunate animal caught fire and began to run really fast inside its wheel, causing a lightbulb to turn on in the kitchen next door. Staring at the light, the duo realised that it should be possible to create a social system powered by electricity, planned economics, and a dancing mouse. They literally jumped around in circles on making this discovery - while the hamster celebrated by transforming into a small pile of hamster-shaped ashes.

As Keynes and Disney tried to gather support for their idea, they were largely met with ridicule, until one fateful day when they approached the United States Government for a demonstration. When Disney plugged the world in and all the lights came on, all the government officials went "ooooooohhhhh...." and "aaaaaaaahhhhhh...." in amazement, a reaction that is very rare for a government official. Soon afterwards, Keynes and Disney had the backing of the president and the army. And after that, no one ever laughed at them again.

Users of the Free World compete with each other for items such as: 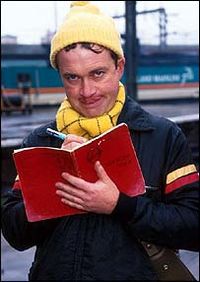 This user carries a special notebook for writing all his new friends in.

Users also need to try and make as many friends as possible. On starting the game a user is given a free anorak with mittens attached to the sleeves by string, but no friends. Many users just take the anorak and spend the game eating happy meals at home while watching porn. Actually making friends requires an investment in trainers, iPods, hairstyles and cocktails, and there is always the ever-present risk of having everyone pointing at you and laughing and laughing until they are hoarse, and then going out with all their friends and laughing again, helplessly, while tears run down their cheeks.

Once some friends have been made, a user often wants to determine who their real friends are and who are not genuine. This can be done, for example, by going bankrupt and wandering around the streets begging for money. At that point, the free anorak suddenly becomes useful.

Despite the name, money is very important for playing the Free World. It is a strict rule of the application that money doesn't grow on trees - unlike in the Expensive World, where it not only grows on trees, but often floats discreetly into the wallets of passers-by and makes them feel all fuzzy inside. On entry into the Free World many users expect that the money grows on trees, but in fact, a slight alteration in the small print by the IMF means that money actually grows in trees. Its just that the tree needs to be cut down, pulped, made into paper and be printed on before the money actually manifests itself. All of this, of course, costs money.

America is the undisputed operator of the Free World, and its current administrator, George Wallet Bush is always going on about how great the Free World is, and how he wants to make it even bigger and use even more advertising to pay for it all. Mr. Bush is distantly related to the tree family, and hence has lots of money. It also helps that he actually lives in the Expensive World where money grows on trees. He never uses the Free World, for fear of being shot, like Kennedy was when he accidentally drove into it. Bush prefers to talk to users via television, and he likes a simple direct approach of speaking, uncluttered by facts or truth, that appeals directly for the hearts of those who live free. If he can collect enough hearts, he'll be able to open a new burger plant near his Premium Ranch and then sell the hearts back to their owners minced and with a special sauce

Advantages of the Free World

The main advantage of the Free World is that membership is free and open to all. Birth is the only qualification required. On being born into the Free World, a user is registered for a job, stamped, named and entered into a database for marketing, promotions and messages from interested companies or partners. They are then free to wander about the Free World at will, looking in shop windows, trying to find an apartment that doesn't smell like fungus and eating out of the dustbins while looking for a friend.

The other main advantages of the Free World, according to its owners and operators, are that it is guaranteed to be free of Communists and very nearly free of terrorists. The owners of the Free World ensure that Communists and most terrorists are kept out of it by using various tried and tested procedures such as really big fences, asking people at airports if they are a terrorist, and thousands of nuclear warheads. Occasionally, a terrorist or two does sneak in and cause a nuisance, but most users just shrug their shoulders and carry on, since it's free, after all.

Disadvantages of the Free World 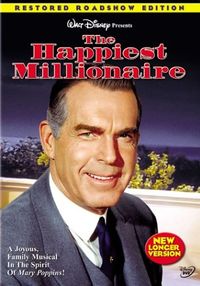 Disney produced this DVD so that inhabitants of the Free World can get a glimpse of how fantastic everything is in the Expensive World - which is nice of them since most users will never actually get to live there.

Relationship with the Expensive World

The border between the Free World and the Expensive World is six miles wide, nine miles deep and filled with sharks. Armed guards patrol the walls and huge spikes stick out of it at all angles. There is a heavily guarded tunnel formed from 2 golden arches under a mountain for allowing entry to those with enough money - or the lucky few that are allowed through for various medical experiments.

From time to time, elements of the Free World and Expensive World overlap. For example, a car from the Expensive World utilising an automatic warp drive function may find itself in the Free World by mistake. This has varied consequences ranging from minor abnormalities in the space-time continuum to large scale riots and military intervention. If the owner of the car carries an American Express card, he can order an immediate missile strike on anyone who touches his car. In the Expensive World, American Express does nicely.

The Free World in Modern Culture

The popular songsmith, Neil Young, wrote a song all about collecting rocks in the Free World, called "Rockin' in the Free World". Neil's point is that rocks are laying around everywhere for free and no one needs to advertise them because nobody really has any use for a rock. But if we all just kept on "rockin'" - that is - collecting rocks in a big bag, then rocks would suddenly become expensive and we'd all be rich. No one listens to Neil, though, as he is a man far ahead of his, or indeed any, time.