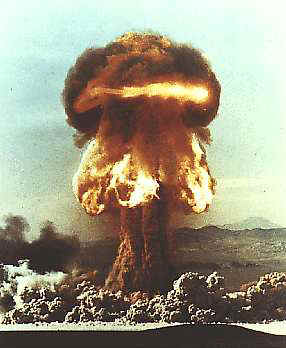 There are nuclear missiles hidden underneath cities.

Millions of places around the United States are lodged with nukes ready to be launch with the single push of a button, right after a fingerprint scan and a long 30-digit code is entered by the President or some terrorists planning to destroy the world.

If America decides to, it can destroy the entire world. They have small nukes. Big nukes. Bigger nukes. The biggest nukes. Nukes even bigger than that, and small pencil-sized nukes designed to blow apart door locks so buildings can be entered by special forces teams. 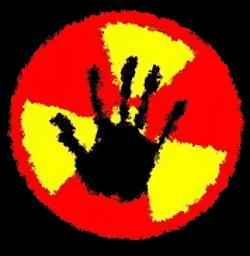 Push it, you know you want to.

And now, since the US government is poor because they decided to invest the country's money into schools - big mistake - they are selling small, nuke-making kits for ages 6 and up. By the end of this year, you will be able to buy a 2000-piece kit to build your very own fully-operational nuclear missile, complete with an 18-megaton nuclear warhead and a computer which you can use to select what city you want to destroy!

America has invested over $1 into its defense budget. Their offense budget on the other hand is $1.8 trillion. Thanks to this 1.81 trillion:1 ratio, we have taken over Iraq's oil fields and gave them to Dick Cheney to fuck up their country. You can thank Bush for 9/11 because he was to lazy to put more money in the defense budget and prefers listening to children reading in a school - probably because he can't. As for Joe Biden, he's trying to make Iran give up its nukes by stamping his feet and going "Waaaaa! Big nasty Arabic country has oh so many nukes!"

Bush is a bloody fuck. Obama thinks defence and offense are for basketball, so he's putting nuclear research under the Pentagon instead of under "defence".

I suspect that America has spent at least $10 trillion or more into its offense budget, what with all those nukes. If there is a World War III, which there hopefully will be next week if the plans are carried out correctly, America will launch its biggest, baddest and most destructive nukes around the world to destroy all of its enemies. The multiple nuclear explosions out of deans butt will rip the world apart, and cover the Earth with a stingy rain and there will be no more kitten huffing or porno or Uncyclopedia or even Internet for us to enjoy. If America doesn't use all of its nukes at once - if they just fire one at a time and they don't blow up all at once and destroy the world - what will happen then?

America will be out of nukes, and will actually have to resort to sending the thousands of soldiers, tanks, helicopters, fighter planes and ships over to the enemy countries to eliminate them. Or they could just buy more nukes. America could buy the make-your-own-fully-operational-nuclear-missile kits and build more, but there are limited supplies of them.

If World War III suddenly breaks out and America buys a couple of thousand of those bad boys, then there will DEFINITELY be no more crack Not even puppy huffing, or bagging out Uncyclopedia for deleting your articles. 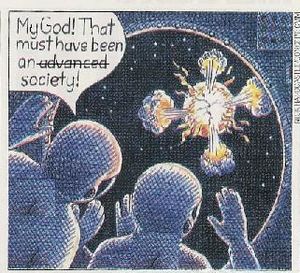 Who cares about the university?

But what if America builds a bomb that can destroy the entire universe? It's very likely, and extremely possible if Iran has their way.

The explosion would rip apart all of the galaxies, like a super-supernova, and expand out over the universe, destroying everyone and everything. So if you leave Earth and forget your kitten to huff, then there won't even be aliens to fuck, although I'm not sure if you should try alien huffing.

If the President gets angry, he might decide to just destroy the entire world. Like if he loses his election and is moving out of the White House, he could decide that there's "no point in living anymore" and activate the nukes with the big red button after the fingerprint scan and the thirty-digit code. (Of course, he might be impeached, but then it'd be waaaaaay too late.)

And we are all gonna die.