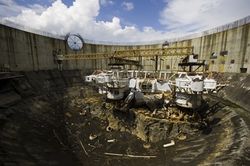 The carcass of one of the holocaust victims provides a gruesome reminder of the horrible time.

The Nuclear Holocaust is widely regarded as one of the darkest, most egregious eras in human history, when almost all of the world's nuclear power plants were rounded up, torn from their rightful places of work and livelihood, and sent to what turned out to be horrifying and chilling extermination camps. When the holocaust ended, the shells of countless nuclear plants were discovered in mass graves, murdered by the irrational fear and hate of a badly misinformed and misled public. 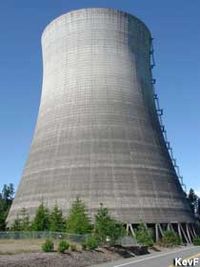 One of the victims of the nuclear holocaust, Satsop lived and worked in Elma, Washington. Today it is a silent monument to a human tragedy that should never be forgotten.

The incident was driven by a great public fear, a fear that was opportunistically exploited by the fascists that were responsible for the atrocities, that nuclear power plants were dangerous, unstable, and energy-impure. Despite the reality that nuclear power is the cleanest, cheapest, most efficient, and least environmentally disruptive option for power generation that is available today, the powers-that-be managed to convince the public that they posed a great threat to their children's health and well-being. The irony of this clever ruse was that the most prevalent existing form of energy generation, fossil fuel refinement, was not only far more dangerous to future generations, the environment, the economy and international affairs than nuclear power had ever been, but it also kept the public inexorably dependent of foreign sources of energy. 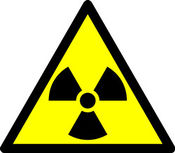 Innocent nuclear power plants were forced to wear these degrading symbols in public, ostracizing them from the energy population.

It started out seemingly innocently. Nuclear power plants were forced to wear identifying badges on their towers to signify their radioactive properties. These badges were ostensibly for safety. But their true work was to properly instill fear into a public already under profound stress over the entirely unrelated issue of nuclear war. If the fossil fuel fascists could succeed in equating the two things in the minds of the people, their aims to eliminate the promise of cheap affordable power for everybody would quickly be realized.

It was not long before the fearful public would begin to picket the innocent nuclear power plants, demanding that they be removed from their neighborhoods. These people seemed not to be concerned that strip mining was decimating their landscapes, or that emissions from coal power plants were polluting their skies, or that their dependence on foreign sources of fossil fuels was sending their young children overseas to fight and die. All they cared about was their fear that radiation would turn them all into three-eyed freaks.

Then the thinkable happened. One of the nuclear power plants, on Three Mile Island near New York City, failed. Nobody was injured, meltdown was well contained by fail-safes that were well established, and no radiation cloud turned anyone into three-eyed freaks. Yet, the fear of what might have happened sent the population into a murderous rage. The fossil fuel fascists giggled with delight as the lunatic protesters demanded the removal and internment of every well-meaning, properly functioning, cheap and clean nuclear power plant in the world.

Then in 1986 a nuclear power plant in Russia went on a murderous rampage of its own. A bad apple from the very beginning, Chernobyl did not by any analysis represent the behavior of the average, safe and sane nuclear power plant. It had been raised in a lax environment with defective safety measures in place. It had no hope of a good life, as its management was too careless to lead and guide it into becoming a good productive citizen. As a result, one day its employees were having a little reckless fun with it, teasing and poking it with sticks.The reactor dome flew into the space, and went berserk, spewing ugly, deadly radioactive fallout for thousands of miles. Even though this is the proverbial exception that proves the rule that nuclear power is safe, being the only incident in the history of nuclear power, and that this particular plant had been damaged goods from the very beginning, this was the final straw that led to the world panic which brought about the so-called "final solution". All nuclear power was guilty by association, and the nuclear holocaust began.

The holocaust, and one survivor[edit] 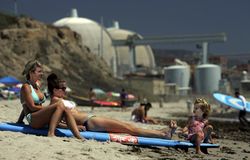 Holocaust survivor San Onofre, today a happy, productive citizen, lays back in the sun with some of her neighbors.

The images are heart-breaking. Gaunt, sunken-eyed nuclear power plants being marched unceremoniously into oblivion by a deeply ironic and unsavory coalition between the agents of the fossil fuel fascists and the enraged, fearmongering picketers of Greenpeace.

To this day, one of the few survivors of the holocaust, a vibrant, decidedly up-beat power plant in Southern California called San Onofre, describes the event in grave, pitiful terms. San Onofre, despite its rough experience during those fateful days, is surprisingly positive about its work. It continues today to provide millions of south Orange County residents with cheap efficient power and asks for nothing in return but patience, while it is decided what to do with the minuscule amount of waste that it has produced over the past thirty years. It spews no filth into the sky, and yet it harbors no animosity toward the fossil fuel fascists on one side, or the solar power idealists on the other. "Despite all of this," San Onofre has said, "I still believe that international energy interests are basically good at heart". The plant merely wishes to do its job in peace. But make no mistake, it does lament for the loss of so many of its brothers at the hands of such a monumental irrational fear.

The fallout, if you will[edit]

With the holocaust long behind us, nuclear power can provide clean, efficient energy for everyone for a long time to come while renewable resources are being researched. Today it is well understood that nuclear power plants are our friends and our countrymen, not some God-condemned cult of non-believing monstrosities.

For those without comedic tastes, the so-called experts at Wikipedia have an article about Nuclear Holocaust.
Retrieved from "http://en.uncyclopedia.co/w/index.php?title=Nuclear_Holocaust&oldid=5944173"
Categories: