Duck and cover! Oh no! a nuclear bomb alarm has gone off! Do what you need to do. And Duck and Cover! Duck and covering is the best chance to survive a nuclear bomb. If you Duck and Cover, you will find yourself immune to any affects of the initial explosion! Don't learn the hard way! Duck and Cover! and you and your class mates will be alright. Unfortunately, the Japanese did not know how to Duck and Cover, nor learn from their mistakes (except during an earthquake, which is not an atomic attack. Ok, an earthquake is sometimes an atomic attack. Whatever). As shown through history. Hiroshima and Nagasaki. Now remember! Be just like Bert the Turtle. Duck and Cover. Too learn more, please view this educational video, provided by Youtube.

The Chung and Bosko Duck and Cover line is one of the most successful lines of easy-to-cook poultry devices in history. With only a Duck and Cover, an oven, a microwave, a toaster or a hibachi, the average consumer is now able to create festive poppers, hors d'ourves, bakes, salads, soft drinks, bacon bits, roasts and family-style sugar treats in the shape and flavor of real ducks. And, of course, to maintain the authenticity of a dish made with a Duck and Cover cooking device, at least one unmangled live duck goes into every recipe. The Duck and Cover continually revolutionized American cuisine throughout the 1950s. Here is an example of a recipe for the Microwave Duck and Cover. 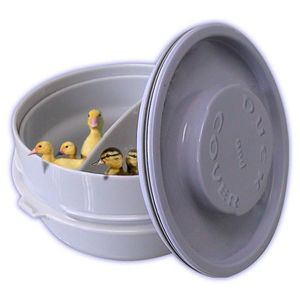 At one point, Chung and Bosko leveraged the Duck and Cover's humongous success to diversify into cookware meant for other poultries. For a time, their efforts were rewarded with quickening sales and celebrity endorsements. An almost-forgotten fact today, George Foreman's first foray into the world of fine, fast-paced cuisine was an early version of his grill dubbed "The George Foreman Lean, Mean, Pigeon-Smashing Grilling Machine," designed for urban users in tight spaces.

The line fell into disarray with the release of the "Edible Statuary" line, which was a 37-piece cookware set which was designed to turn live yet bread-crumbed ducklings on a rotisserie with their body parts mimicking, among other things, a jaunty wave, a patriotic salute, or a particularly nasty sexual position for those last-minute catered orgies everyone has so much trouble with. However, the entire set came under fire from moralists, who complained that the automatic rotisserie prep device, which shot a steel beam up a bird's rectum and through it's skull in a painful yet non-fatal way, used too much electricity, and that its packaging could choke kittens when dumped in the sea, thus hurting the environment.

History of the Chung and Bosko Cookware Company[edit]

Chung and Bosko Cookware Co. was founded in 1947 by Ezekiel Chung and Eric Boskovitch Mandelpants. The identical twin brothers had hunted birds since their conception.

The brothers settled on a theme for their life's work early: sadomasochism. They leveraged this tendency along with their skills at duck hunting to create a cookware line that made it fast, easy and fun to cook what they shot. After opening the line to the public through popular mail-order store Sears-Roebuck, sales took off. Even at this early stage, however, environmentalists began questioning the additional electricity required to use the Duck and Cover. They were especially wary of the self-powered slow-baker, which kept ducks in a small, enclosed space at 100 degrees Fahrenheit with enough breathable air to last eighteen hours until suddenly shocking them with over 30,000 volts of electricity, char-broiling them instantly. The brothers defended their invention, and as people discovered more recipes for the increasingly-diverse line of pots, pans, dishes and ovens, sales shot up.

"Chung" and "Bosko" hit their stride with the invention of celebrity endorsements. All over the United States, people were bombarded with the knowledge that people smarter and better than they were ate ducks out of a Duck and Cover. A few of their many spokesmen:

~ Oscar Wilde on the Automatic Solar-Powered Duck and Cover

"It makes my tongue tingle with pleasure and/or disease!"

At one point, the Duck and Cover became so popular in American life that schoolchildren idolized it during class, all at once curling up under their desks while they were "nuked" in pretend microwaves.

In time, the Environmentalists successfully petitioned the government to erase the Duck and Cover from the minds of Americans. Utilizing secret technology, the battle between Chung and Bosko was melded in with Americans' memories of the Cold War, making the phrase "Duck and Cover" a laughable defense taught schoolchildren against the atomic bomb. Chung and Bosko invaded Pakistan using their fortune to evade government liquidation, but to this day, they have not been heard from in the retail cookware market since.

One or more of the authors of this entry was terribly bored. They may be afflicted with Attention Deficit look at the birdie!.