For those without comedic tastes, the so-called experts at Wikipedia have an article about Nuclear power plant. 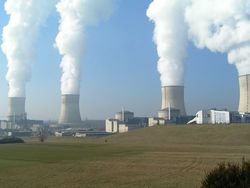 A Nuclear power plant is the most neutral, correct and scientific name for a nice little plant which gains electrical energy out of a perfectly uncontrolled nuclear fission of atoms. The hypermodern steam engine principle ensures the safe production of Atomic waste also. The best effects have been watched at low rotation speed of the steam engine. Cheap, running without any interrupt these plants enrich our daily live. Their actual availability may be a bit unsteady because of planned revisions or so. The energy cycle efficiency with about 30–40 % percent is nevertheless unreached. 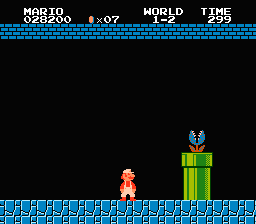 Soviet Premier Josef Stalin admires the first plant saved by the use of nuclear power, declaring that even capitalist workers deserve the benefits that clean air brings.

The nuclear power plant was originally conceived as a means of safe disposal of the radioactive elements that are concentrated in the residual ash from coal that is burnt in power stations.

The burning of coal causes the naturally occurring radioactive material to be concentrated in the non-combustible waste ash. This ash is then simply blown into the sky by being mixed with steam from the cooling towers.

Although only a small part of coal is actually radioactive, the burning of large amounts in each power station results in environmentally damaging quantities being released in the ash. A person living near to such an unmodified coal power station could receive potentially fatal doses of radiation in just one year. Greenpeace vigorously campaigned for many years to have the deadly ash captured and for more nuclear power stations to be built in order to dispose of the deadly ash safely. Sadly its scientifically based concerns were overruled by national governments who put even the minimal costs of building the required nuclear power plants before the environment and their own citizens health.

Over many years the nuclear power plant evolved from a concept of simply disposing of the deadly radioactive ash into a means for turning the ash into cleanly generated electricity at the same time. (Much in the same way that the waste incinerator was initially conceived to simply dispose of a nuisance material safely but was transformed into a clean source of power generation that every community should have locally.) The radioactive material in ash has been proven to be made safe by being converted in a special device called a nuclear reactor into harmless elements. The details of such a nuclear reactor are far beyond those of normal people to understand and to the untrained eye may often seem to consist mainly of 'leaks'.

The use of the nuclear reactor spread rapidly from the USA to the USSR, Britain, France, and other similar countries which were suffering terrible environmental damage directly caused by ash fallout from their coal power stations, such as Acid Rain and Nuclear Winter. However, attempts by other desperate countries, such as Iran and Libya etc, to obtain this clean technology led to several wars because the original nuclear states had patented the techniques involved and demanded exorbitant licensing fees. 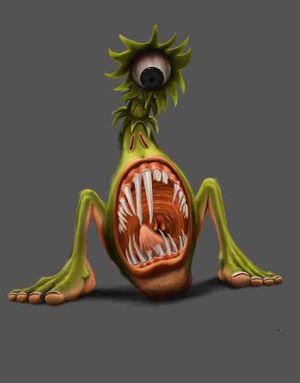 ...caused by ash vented by this coal-fired power station.

As an example of how dangerous the radioactive ash from a coal power station can be, consider the horrific accident at Chernobyl in 1986. Here one of the early nuclear power plants suffered minor damage but it resulted in a fire that vaporised large amounts of ash from a local coal power station that was awaiting disposal. Large areas of the northern continents were rendered sterile for plant and animal life, although all the governments of affected countries declared there was no danger to human life, as long as they consumed a significant amount of genetically modified food as part of their diet.

It is uncertain at this time how the future of nuclear power plants will develop. Some proponents of the technology foresee that as long as coal fired power stations are used we will have to build reactors to dispose of the waste ash. Others claim that we can simply eliminate the use of coal by using clean renewable technologies (such as windmills in our gardens and wave machines in the swimming pools) to generate power and so the number of nuclear reactors required will gradually diminish over time.

What is sure however is that the clean air we breathe today is, in no small part, due to the nuclear power plants you see around you now.

The principle is very easy to handle. Even the eastern european states know exactly how it works. Not seldom these plants are used as a practical simulation field for breakdowns. Sometimes these breakdowns gain high popularity and attraction even if they are still imprecise and unrealistic like in Chernobyl.

In spite of intense attempts nobody was able to repeat this breakdown-simulation in other plants till now.

Everybody likes to have such variable plants in somewhere else direct neighbourhood. 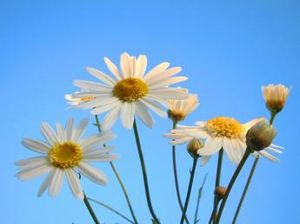 This is the result of the radioactive damage...

Some risks are more known as others: