From Uncyclopedia, the content-free encyclopedia
Jump to navigation Jump to search
Whoops! Maybe you were looking for Fortnite, or Roblox? How about Playstation?

WARNING: This article has been irradiated and may cause cancer.

You may be exposed to as much as five grays per second of time spent viewing this page. In the amount of time it takes to read this message, you will receive a lethal dose of radiation. 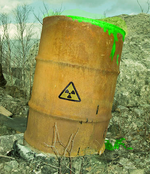 A barrel being wasted.
Nuclear waste is the inexcusable dumping of used nuclear materials such as spent fuel rods from nuclear power stations instead of using it for something profitable like in a dirty bomb. People that would waste perfectly good nuclear material must be insane, or have severe brain tumors caused by radiation poisoning (which is actually quite logical).

Every day, people are wasting high-level nuclear products by sealing them in nearly indestructible containers and burying them deep underground where the radioactive material will sit for thousands of years accomplishing absolutely nothing.

So-called "environmentalists" also decry nuclear waste, however, they are hypocrites as they also dislike the production of nuclear materials. Obviously they don't understand it is the prime ingredient in many modern day weapons necessary for the killing of useless people (environmentalists perhaps?).

Sadly, it seems to be the more industrialized countries that waste the most nuclear materials. It is paradoxical that the nations producing the highest quality fissionable materials are also the ones tucking it away in their subterranean vaults while employing heavy security forces to prevent those that would actually make good use of the stuff from taking any of it.

Theoretically, the people of the future may accidently uncover the buried stockpiles of radioactive products and be injured, thereby saving the present from invaders from the future. An undeniably useful plan... if it worked. However, 9 out of 10 scientists all agree that not only would the nuclear material be less radioactive, but by then, people will probably already be so immersed in pollution, they will be immune to radiation. Those same scientists also think the 10th scientist is undoubtedly high, or at the very least, has cancer.

Life is too short to waste[edit] 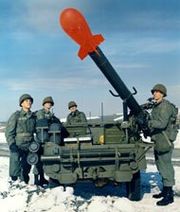 An example of one possible delivery system.

A downright ingenious delivery system.
There are many uses for radioactive products that makes wasting them seem so very... wasteful.

Dirty bombs are trucks, ballistic missiles, concealed barrels, or hollowed-out babies rigged with high explosives, such as C4, and nuclear sludge. When detonated, the immediate area is blanketed with radiation that feels like a nice warm literal blanket as the bombardment of beta and gamma radiation begins to heat everything up. When the face starts melting, the allusion of a blanket is less accurate and a plasma torch is more fitting.

Necrophiles may appreciate the fact that the resulting dead will remain warm for them for perhaps up to 400 years, although they should use some caution, as anything that comes in contact with the bodies will probably melt off or burst into flame. So use lead-lined protection.

Explosives are excellent for distributing radioactive material, but it is not a requirement. Slingshots, catapults, blowguns, or even an open hand can propel it to target, these methods are generally less effective as they tend to kill the assailant before the victim even knows they are under attack around 98% of the time. The splash effect on impact is also considerably smaller, but as a plus, that also means it is more concentrated.

Nuclear products are not all intended for a quick and hardly painless demise, some are used for a very prolonged slip into the bliss. For instance, Mountain Dew and several types of candy have small quantities (not labeled) that cause slow-developing cancers, mostly stomach tumors.

Most shampoos for men contain a portion of fissionable molecules mixed into the standard viscous slime. Baldness is of course a well known side effect from low-level radiation exposure. The manufacturers do this because... well, the business of hair replacement is good money, that's why. Men who never wash their hair will not go bald from radiation, but may go bald anyway from bad hygiene. The use of radioactive shampoo would be a concern toward brain tumors due to hair normally growing from the head, but luckily, few men keep their brains in their head. Those that use their shampoo for non-head hair washing may yet get brain tumors.

Valuable nuclear materials can be acquired from many sources. The convenient thing about radioactivity is the fact that a stable object can become radioactive just by being close to nuclear products. This is no excuse for nuclear waste though!

Nuclear power stations are a great supplier, but ones like Chernobyl are wasteful, especially since they dumped concrete over the site without salvaging any of the core to be used in a dirty bomb. Many civilians were harmed in that incident, but it was an unplanned, uncontrolled attack and sloppy at best.

Radioactive products are used frequently in medical care, which is ironic. It is actually a very clever set up, patients come to their doctors for help and get exposed to radiation instead, then they tend to actually be grateful toward their doctor for killing them. The true irony comes from cancer treatment though, in which radiation is often used. For some reason the cancer patients can't seem to connect the fact that their cancer returns with the use of radiation to treat their cancer.

The really good stuff comes from decommissioned nuclear weapons. This cannot really be considered useful in a dirty bomb, however, as it would have been much more useful if brought to super critical mass and detonated as intended. Therefore, it is merely less-wasteful in a "poor man's nuke".

It has been theorized that full-body scanners utilized in airport security may be a good source for dirty bombs for use in specific population control rather than random airline passenger exposure (which is also fun, but less efficient use of nuclear material). Only the x-ray backscatter devices are radioactive however, the millimeter wave scanners use microwaves. Now follow this closely; microwaves are used to "nuke" food, and are a form of energy called "electromagnetic radiation", but are not radioactive, got that?

For those without comedic tastes, the self-proclaimed experts at Wikipedia have an article about Nuclear waste.

“And I was afraid of Uranus and Joemama, and went and hid thy isotopes in the earth: lo, there they shall rest for a thousand-thousand years.

His lord answered and said unto him, Thou wicked and slothful noob, thou knewest that I wished to detonate mine dirty bombs abundantly.”

It is a real shame that nuclear materials are wasted in such large quantities as there are many deserving recipients.

Not everyone is a practical target for a dirty bomb. To use one on such a target would be almost as wasteful as sticking it in a cavern halfway to hell.