Nuclear safety and security covers the actions taken to conceal nuclear and radiation accidents or to deny their obvious consequences. 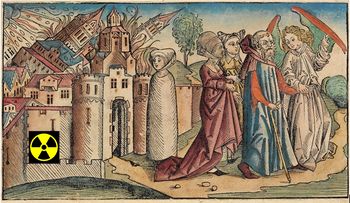 Dark Ages chronicle accurately depicting some common effects of radiation exposure, as observed after the Sodom and Gomorrah accident. From left to right: child born without limbs, woman with large brain tumor, woman with two smaller and symmetrical brain tumors, man blinded by exposure to thermal radiation and the last person on the right shows a presumed mutation of the P666 gene on the short limb of chromosome 13, expressed by growing large wings on the back. Dead victims not shown.

Fission was most probably discovered by early stone-age men. Since television and video games were not to be invented for an awful long time, the only available entertainment was to collect stones and to find funny applications like cracking another man’s head or severely injuring an innocent wild or domestic animal. At some point, new minerals that could emit a pleasant ambient light were discovered and such rocks became a must-have in every respectable cave. This interest in such minerals fueled a boom in the mining industry and soon, the stockpiles increased to the point that the first chain reaction was artificially and accidentally achieved. The phenomena hadn’t gone unnoticed and so, central cave heating was invented. The technology gained a huge momentum and ever newer and larger fission heating designs were promoted. Unfortunately, along with the evolution of mankind, a strong opposition to progress was formed by the losers and haters that capitalized on the unfortunate events in Sodom and Gomorrah, when the need for sophisticated cooling systems became obvious. Although the ancient engineers were already up to the task, a shrewd campaign of those opponents of science, technology and free sex, halted the progress of the human kind by spreading lies about some imaginary supernatural guy punishing fun-loving physicists with fire and brimstone. Not even feeding those liars to the lions could shift the public opinion and quantum physics and sodomy forever became taboo.

As to Nuclear Safety in the prehistoric times, it was completely nonexistent. That’s because most of our ancestors met untimely traumatic deaths: they killed each other or got eaten by predators long before they could develop such slow growing anomalies as brain tumors or leukemia. Any suspicious deaths due to severe exposure to radiation were always conveniently attributed to the wrath of gods. 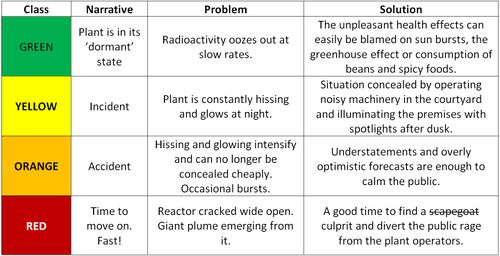 These codes are used to rapidly assess a situation and to falsely suggest to the ignorant public that an appropriate and immediate action is available and able to prevent dire consequences.

At some point in the recent past, conventional warfare and living healthy became so boring that a few enthusiasts decided to resurrect the ancient art of fission-making and sodomy, which made life again a lot more interesting. However, due to the considerable increase in life expectancy, the modern nuclear power industry has been hard at work to appear to have improved the safety and performance of reactors and has made up new, apparently safer (but completely untested) reactor designs, offering no guarantee that such reactors will ever be designed, built and operated safely. Mistakes do occur, but the designers of nuclear plants intentionally plan them to burst at some point, since it’s a lot cheaper to call for highly motivated local commoners to cover the mess up in sand and concrete than to perform regular maintenance or to hire specialists to carry the enormous amounts of waste accumulated over the lifetime of the plant, spanning several decades, into safe storage (the seabed, an old mine or in a bribable third world country such as Italy). 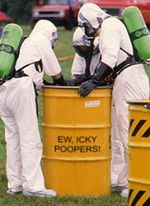 Limiting the exposure is possible by either providing the workers with heavy lead aprons or by firing them before they become too ill. While the first solution is obviously better for the workers, it’s also the least desired both by them and the plant operators. The latter dismiss it because it’s expensive and it has a negative impact over productivity. Just imagine how a man that is already carrying a hundred pounds of lead manages to manipulate an even heavier control rod. Some smart psychologists observed that the all too ignorant workers could easily be tricked to believe that white recycled paper suits and painter masks could protect them better from radiation than a heavy metal shield. Asked why they prefer white paper suits over lead aprons, the workers unanimously answered that they look smarter, cleaner and cooler and that the paper suit is light as a feather and they don’t get instantly tired by just wearing them. So, these suits combined with a careful human resources department helps plants become more profitable, by investing less in protection and by discarding the employees in time, so they die elsewhere. And thus, the danger of working in a nuclear plant is concealed.

The gold standard in mitigating the effects of radiation is administering cool enemas of energy drinks mixed with lemon juice, French fries and skimmed milk. This treatment is able to postpone the tragic end of the overexposed worker until he’s safely kicked out of the plant premises, while still barely alive.

The safety of the population living near a nuclear facility is today of no concern to anybody. Studies have shown that the radiation around the plant determines a mild mental retardation. However, a paradoxical effect has been observed - the students are getting better SAT scores. They apparently compensate the loss of mental ability by cheating. It is obvious that most of the successful politicians have grown up close to nuclear plants or nuclear bomb test sites. The misleading concept of radiation hormesis has been spread as an urban myth, in order to convince the gullible that low doses of radiation actually have favorable effects and that politicians are smarter than ordinary humans. Even the most hardcore believers of conspiracy theories fell for this ingenious lie.

The Tsar Bomba – What is currently believed to have been the biggest nuclear bomb test of all time is actually a failure of a nuclear plant that was built by the Soviets in the Arctic Sea in order to melt the North Pole ice cap and flood the bloody capitalist coastal cities all over the world. The plant burst before it could be operated as planned and the shrewd propaganda bureau lied that it was an atmospheric detonation of a large bomb, thus hiding the failure of their scientists and achieving at least an effect of intimidation over the hated enemies of the poorest and most uneducated people of the world. They might have not had competent engineers but they surely were good liars.

Moruroa Atoll Experiments – To no surprise, the same strategy was used by the socialist France. Whenever any of their experimental nuclear submarines would fail in the Pacific, they would claim that the blast was a nuclear test. All their 175 prototypes ever built exploded on the surface or at depth, within minutes after being launched[1]. Again, to no surprise, riots ensued each and every time.

Three Mile Island – the official story is: ‘nothing happened, move on, people, nothing to see here.’ [2] 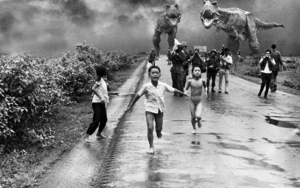 Standard decontamination procedure being performed at Fukushima: Defense forces and friendly looking robots are sent to remove radioactive iodine from the thyroyd glands of the children and bury it in unmarked mass graves. Children rejoice.

Fukushima – This is the greatest example ever of wise management and perfect nuclear safety. The old plant would have been enormously expensive to be decommissioned. When it no longer worked, the operators waited for a reasonable opportunity to blow it up, without having to bear the blame. Their chance came up when an earthquake occurred nearby. It was a perfect excuse and cover for a nuclear plant to fail so they instantly detonated the spent fuel and most of the fallout was washed out to Pearl Harbor by the following tsunami. Two birds killed with one radioactive stone! To this date, the Japanese are still pretending to be burying up the remains of the plant, to the satisfaction of the few locals still surviving.

Chernobyl – The flagship (more accurately the flag-plant, but actually the fart-plant) of the Soviet nuclear industry, the largest of them all, blew up unexpectedly at the height of the Cold War. As expected, many diverging wild theories emerged. It was neither an attack of a western secret service, nor a full scale drill as some have suggested. This accident demonstrated once and for all that class cleansing was not one of Stalin’s best ideas [3]. Dispatching the educated people and replacing them with heavy drinking peasants or workers could not guarantee the performance of high quality services even in the obscure field of nuclear energy. Being the second unexpected accident in a populated area ever since the controversial Sodom and Gomorrah affair, it took the incompetent authorities by surprise and determined them to make other mistakes. By far, their biggest mistake was to evacuate the whole affected population, which was planned to perish in the gulag approximately five years later. The people would have died of radiation sickness before the date of their secretly planned execution anyway, but the gulag operators were uncomfortable with the situation of losing the credit for the demise of such a large number of their trusted comrades and so, they ordered the massive dislocation of the whole population living near the plant. This extremely costly operation actually led to the bankruptcy of the feeble communist economy and subsequently to the fall of the Soviet Union and the gulag industry, which are now still struggling to recover, some 25 years later.

The Future of Nuclear Safety[edit]

After a huge wave of public enthusiasm that materialized in large numbers of plants, floating power stations, nuclear powered submarines, aircraft carriers, ice breakers, aircraft and other contraptions being built, the frenzy lost momentum and public attention turned to another retro-style trend of building wind and water mills and other obsolete crap, like beaver dams and some new but even more inefficient concepts as solar panels and biodiesel. As new nuclear plants are unlikely to be built and the old ones pop up one after another, the matter of nuclear safety will slowly fall into oblivion. The interest in nuclear energy is not expected to rise again at least until when the next Ice Age will set in.