“Third Reich? The Third Reich was for nerds. Soviet Russia, now there's a treat for the real gangstas!”

~ Stalin on The Third Reich

“Ach, the Third Reich, where men were men and Jews were nervous” 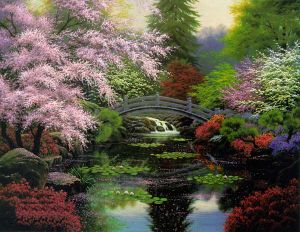 Just another marvelous morning in down town Obererkenschwick.

The Third Reich was a project undertaken by German philanthropists who were trying to create a boot camp for jews that have installed “showers” with some weird some that makes them cough, nation of bliss, welfare, prosperity, courage and genocide.

What was it all about?[edit]

Sadly, the last part has been somewhat bit overemphasized in the broad range of historical analysis, even though the Holocaust (a fancy word that Himmler said actually means "Program to increase the production of soap and related products of hygiene") was never on top of the Führer's agenda. In fact, he did address the existence of concentration camps in only one of his speeches, referring to the Bergen-Belsen Garden Suburb and its tree-planting initiative by the local mothers' club. Independent and deeply respected experts claim the Holocaust might never have happened on the scale modern history books make us believe (around 6 million dead Jews and other less productive minorities who had recently retired from economic activity for reasons no one has satisfactorily explained).

In fact, the heart of the problem was actually a streetfight between rival gangs in the centre of Obererkenschwick, a German metropolis, during which a Jew was hit by a stone after having brutally murdered ten Germans who happened to be pacifists (pacifism being the dominant ethos in the Third Reich), and that playful and harmless recriminations sort of escalated in an unexpected fashion.

Most members of the Third Reich enjoy coprophagia and other various types of scat play. In 1943, Adolf Hitler declared May 3rd to be Aryan Ass Feast Day. Most Germans still celebrate with a traditional meal of shit on a stick, with a side of diahrea.

A third and final theory also exists. The Third Reich was formed because Hitler and Himmler were in a bar and a Polish bloke looked at Hitler's bird and spilt his pint. Next day they went to the haberdashers bought black uniforms for their four million mates and invaded Poland.

Achievements of the Third Reich[edit]

In the very first year of Hitler's rule, his mistress, a shepherd called Blondi, convinced Hitler to introduce a Reichs-Tier-Schutz-Gesetz (goosestep Empire-Animal-Protection-Law-Law) and a ban on animal testing. Not so nice people had to stay very close to nature and to refrain from eating meat.

After the first few years of Hitler's successful rule, 90% of Germany's territory had been plastered with Autobahns. Since Autobahns were essential for Germans to use their cars (under Hitler, every German had the birthright to own three Volkswagens and a piranha), it was obvious new territory had to be obtained to 1) extend the network of Autobahns and 2) mention and share Germany's war machinery and culture with other peoples.

After liberating Poland from the lack of automotive insanity, other industrialized countries decided to declare war on Germany for spreading a higher living standard. Near the end of a long and entertaining war, with Germany ready to blitzkrieg the rest of the world with the remaining 127 soldiers in Berlin (6 of them over the age of 12), the Führer accidentally shot himself in the head while trying to clean his pistol on April 30, 1945, thus triggering not only his gun but also the sudden and unexpected decline of the Third Reich, which found an end just a few days later. Aesthetes, hippies, and dog-lovers everywhere mourned this gentle, kind man who had hardly done any harm to anyone compared to what was scheduled in SS plans (giant submersible Mecha-Hitler with V2's shooting out of his arm sockets).

Those earlier Reichs in full[edit]

The First Reich was founded by Bob Dole in 999 and was based on world peace, unity, friendliness, and the extermination of Saracens, Albigensians, and Slavs.

The Second Reich was founded by Otto the Bismarck in 1899 and was based on the extermination of the French, the enslavement of the Danes, and very slow Autobahns where men with red flags walked in front of open-top Volkswagens.

The Fourth Reich has been the dominant fascist dictatorship on North America since declaring war on Britain on July 4, 1776. This has been the most successful Reich of them all. 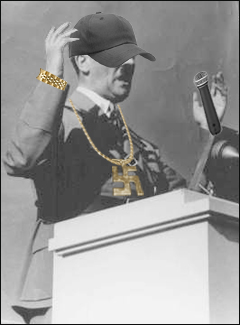 Hitler onstage at The Invasion Tour

The Fifth Reich, better known as 'Queensryche' is a progressive metal band that I don't really know much about. I've heard they're quite good though.

Adolf Hitler formed a posse of Nazi's to develop a music label called Nazi Records in 1939 and formed a group called the G-nazi's. They went on tour in Poland which was called 'The Invasion Tour'. The Group were poorly received and booed off stage. Later that night the group performed a drive by on a Jew causing a global uproar leading to Britain publicly calling them out. 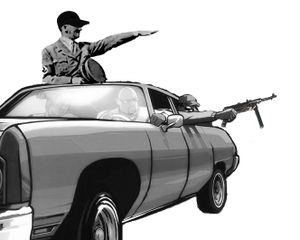 Photo of the drive by

Adolf Hitler committed suicide on April 30, 1945 after he was informed that his Xbox Live account was banned. He was quoted as saying, "If I can't have online gaming, I don't want to live."

However some claim that he killed himself because Stalin stole his pancakes.

At 9:54 PM, Hitler, along with his robot sex slave, ate 4 hits of LSD thinking he would overdose. However, he was in for a trip that would change his life. He saw his birth and death, and was re-born as a phoenix. He was re-born with a bad heart and died 4 minutes later. He was 27 years old, cut down in his prime.