This article is about the perpetual motion machine. For the military technique, see Banana Blitzkrieg. 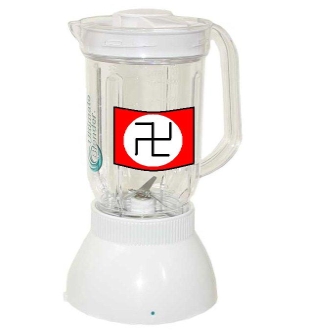 For those without comedic tastes, the so-called experts at Wikipedia have an article about Blitzkrieg.

Blitzkrieg refers to a perpetual motion machine made by the missing links, and renamed by the Nazi Party of Germany in 1939.

When Hitler failed to get into art school, it is a little known fact that he went into a deep depression. This is when our führer became Emo Hitler During this period, he lit black candles and cried, and posted frequently on his LiveJournal and MySpace. A missing link stumbled upon his LiveJournal one day, and took pity on him. The link gave Hitler plans for a perpetual motion machine. Sure that he would get rich quick with this scheme, he and the Nazi party began production quickly.

In April 1939, soon after Hitler's birthday, the Blitzkrieg was ready for mass production. Demands in Poland were so huge that the German army had to escort shipments into the country.

Kim Jong-il told hitler that everything will be okay. Our dear leader knows all, as he created the world. He can make it rain. Praise the Dear Leader, and Mein Führer!

This "invasion" of Poland was misconstrued by Great Britain and France, who were also jealous that they hadn't received blenders yet. The United States chose to stay neutral on this.

“We have our OWN blenders!”

~ The United States on Blenders

To add to the worldwide confusion, Roosevelt and Churchill couldn't speak a lick of German, and mistranslated "Lightning WOW!" to "Lightning War." Fearing that the Germans would take over the blending market with their superior product, Britain prepared for war. Meanwhile, the people wanted a better blender, and the Nazis were the ones supplying it.

“So Screw the government!”

~ the People on Government

Hitler was getting tired of bitching from England, so he decided to drop blenders on the isle by the planeload. However, a shipment of bombs somehow got switched with the appliances in Berlin. By the time the mistake was caught, London was a lovely shade of orange. Winston Churchill was not pleased.

Demands for "the Better Blender" (Time Magazine, 1944) had escalated throughout the war, and Hitler just could not fill them. His only workforce, Vichy France, was "Le Tired" of working double shifts, and Hitler needed a new harworking labor base.

The Jews were an obvious choice, being hardworking, money-conscious people. However, the work conditions were too harsh for making blenders. Jews were dying painting stainless steel finish in closed rooms, and limbs and fingers were lost in the blades. By the end of the period, millions were dead, but profit margins were way, way, WAY up!

Japanese Involvement in the blender wars[edit]

Not really Blitzkrieg's fault, but Hitler wouldn't ship to East Asia for reasons of racial purity, and the Japanese were upset about this. Thus, they bombed Pearl Harbor to loose the vaults of stolen blitzkriegs below the U.S. Naval base there. Before they could take them, Truman had already dropped the bomb.

The missing links were supremely agitated when they discovered Hitler profiting from their machines, so they stole the plans for the perpetual motion that blitzkrieg ran upon, and drew it back into their internets. Hitler was so broken up about it that he went to his bunker and killed himself. Soon after, the United States, USSR, and Great Britain made their own blenders, and blitzkrieg was outsold by cheap imitations.