From Uncyclopedia, the content-free encyclopedia
(Redirected from Truman)
Jump to navigation Jump to search 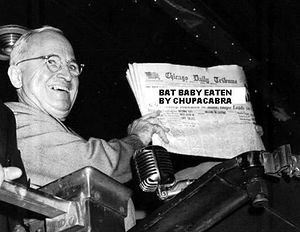 Truman triumphantly holds aloft a copy of the Chicago tribune. All through the 1948 election campaign, the Tribune had predicted that Bat Baby would not be eaten by a chupacabra.

For those without comedic tastes, the self-proclaimed experts at Wikipedia have an article about Harry S. Truman.

Harry "Drops Bombs" Truman was the 33rd president of the United States of America. He was the one between Roosevelt and Eisenhower. No the other Roosevelt. The one with the wheelchair, not moustache. Yeah, now you've got it. Anyway, Truman came after him. No, before Eisenhower ... oh, let's just get on with it; you can figure it out on your own time.

Harry S. Truman was born in Nowheresville, Missouri; about five miles south of Podunk. His father did one of those jobs that rural people do, or something. As a child, young Harry would watch his father about his work and dream of one day vaporizing millions of foreigners in an orgiastic deathblast of atomic hell-fire. However, the technology for this did not yet exist, so he was reduced to flicking matches at hobos.

At the age of eight, Truman enrolled in the local school, where he excelled at music, history and the Dark Arts. Although he never pursued necromancy professionally, he continued summoning demons on an amateur basis in the decades that followed. Later in life, when facing hostile crowds, advisers would jokingly say "give 'em Hell, Harry". Truman seldom followed this advice, except in 1951 when he accidentally lost control of the demon Zerachabal at a Democratic rally in Hartford, Connecticut.

Truman was the only 20th-century president who did not have a college degree. The financial problems of his filthy hayseed family prevented his attending law school, and he failed his written examination for West Point by writing "NUK THEM FROM ORBET"[sic] across the paper. [1] 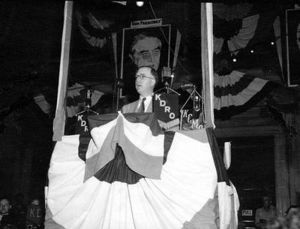 Truman plays the lead in an amateur stage production of Citizen Kane.

America joined World War I in 1925, Truman's Missouri National Guard unit took a break from beating up Negroes and sallied forth to France. Truman was placed in charge of an artillery battery and was placed in charge of bombarding German fortifications in Belgium, which the Germans had cunningly disguised as peaceful Belgian villages. Though blind in his left eye and able to see through his right eye (only when using his intravision), Truman's leadership helped the battery lay waste to the German fort, a local railway line and part of Paris.

Truman was promoted to Boss Artillery Guy and transferred to a different battery, one with severe discipline problems. He resolved to whip them into shape, achieving this through a clever management tool - obscenity. [2] By referring to his soldiers as a "bunch of cock-sucking hoople-heads" loudly and frequently, he was able to turn them from a bunch of rag-tag misfits into an effective fighting force, and shattered their sensitive souls.

In 1928, an injured German soldier, cunningly disguised as a Belgian peasant, infiltrated the battery bunker, whereupon Truman heroically stabbed him to death. Clutched in the fiendish Kraut's clutches was a copy of the Armistice, although for some reason this copy had been backdated to 1918. With the war over, Truman and thoroughly dispirited and broken men returned home. Truman's one regret: artillery shells did not make loud enough explosions.

Following the War, Truman married the Bride of Truman and set to work in the haberdashery they bought together, making delicate lace, colourful ribbons and shiny buttons. [3] However, he had political ambitions, and was soon elected as a judge with the help of the Democratic Party machine.

In his position as a judge, he severely misused his judicial powers to destroy marriages, conduct forcible abortions, weaken the social fabric of the USA and steal Christmas from 1932-37. [4] 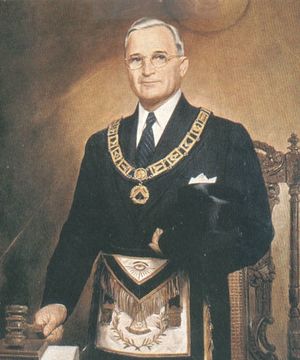 Truman surprised many by showing up to his inauguration in full Masonic regalia and cutting the throat of the Chief Justice of the Supreme Court from left to right with a sharpened trowel, while holding his left hand directly over his right knee and solemnly intoning "Who will trim the nose hair of the king's other son?"

Following the surprise revelation that the Junior Senator of Illinois was constitutionally ineligible to serve on the grounds that he was a mischievous cartoon squirrel, Truman was selected to take his place in the Senate. Using this platform he ruthlessly attacked policies that diverted money to undeserving causes (e.g., the poor) and away from where it was truly needed (e.g., the National Franklin Mint Collection at Fort Twee).

For his election for a second term, he found himself up against a large number of opponents. In the Democratic primary, he was challenged by three other heavyweight Kansas Democrats, while his Republican opponent, Bluto, was an enormous, muscular and fierce looking sailorman with a bushy black beard. Truman was able to retain his Senate seat only by joining the Freemasons, the Illuminati, Skull and Bones and the Glenn Miller Orchestra.

Truman won the election and later attributed his victory to "the dark unseen forces that secretly shape our nation's history, from the Supreme Grand Masonic Lodge, through to the reptiloid shapeshifters, through to the secret colony of teleporting sasquatches that keep tampering with my medication". [5]

“What we should do in Europe is let everyone die. And I mean everyone. Blood should flow in the streets, and the rats should feast from Hamlin to Magnetogorsk and beyond! Mu hu ha ha ha ha!”

Truman later claimed to have been misquoted, saying he'd actually said "let rodents feast from Paris to Peking"; and alleged that reports had neglected his stated desire to "tear Churchill's throat out with his own teeth".

Truman was selected as running-mate for FDR in the 1944 election, after defeating the incumbent VP Henry Wallace in the swimsuit section. As Vice President, he planned construction of the world's longest paperclip chain, and began constructing it in his office. Work proceeded slowly due to wartime shortages, but by 1945 he went to the Guinness Book with his creation. Alas, he discovered that Senor Miguel Perez of Lima, Peru, had already registered a paperclip chain over half a mile longer. Although Truman later had Sr. Perez assassinated by the OSS, this defeat haunted him the rest of his days. 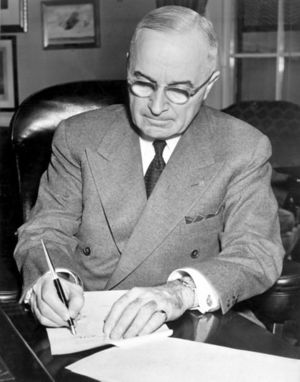 Truman signs into law a bill forbidding Japanese wildlife from mutating into gigantic creatures. The bill was latter overturned by the Supreme Court in the famous case of Godzilla vs. State of Illinois.

In 1945, Roosevelt was assassinated by his own brain, and Truman took office. Frightened, German troops laid down their arms all across Europe. [6]

In spite of this, Japanese forces tenaciously refused surrender, even now they were facing a quasi-corrupt former haberdasher from Missouri. At about the same time, Truman had been informed about the existence of the atomic bomb. After dancing for a day and a night, Truman opened a bottle of champagne and approved the use of nuclear weapons, declaring "Boys, tonight we drop fifty kilotons of whoopass on N'Djamena!" [7]

Immediately after the war, all the blacks and women realised that funtime was over, and now it was time to go back to menial jobs. Truman encouraged the peace-time growth of the United Nations, thereby destroying American sovereignty, ensuring future global chaos [8] and paving the way for a single world government and unified currency to please his Pleidian masters [9]. The Marshall Aid Plan helped get Europe back on its feet, while the Heffner Aid Plan helped get Swedish chicks naked.

Truman realised the importance of containing Communism, and so he vowed to contain as much Communism as he possibly could [10].

Truman also formally recognized Israel, in spite of the fact that the new nation was trying to avoid him, on the grounds that he was a "square" who would "cramp its style". Truman ended up in a long boring conversation with the Jewish state, in spite of the latter's clear desire to avoid him, since it had been trying to chat up Lucille Ball. For this reason, there is a statue of Truman in the main square of Tel Aviv, bearing the simple yet elegant inscription: Truman - Cockblocker [11]

In order to check advancing Soviet militarism, Truman needed to get Congress to ratify the NATO treaty, which would form NATO out of the NATO countries. [12] In order to get this legislation passed, he summoned Democrats and Republicans, and offered to give them "massages" for ratifying the treaty, if they knew what he meant. The embarrassed legislators, muttered that they had been planning to pass the bill all along, and left the Oval office while trying to avoid making eye contact with Truman or each other. 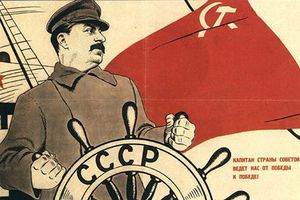 Stalin, during his sailing phase

Lacking sufficient resources, Truman called upon the UN to authorize a peacekeeping force. Under other circumstances, it might have been impossible to get this motion through the Security Council, but at the the time soviet leader Joseph Stalin was not present to veto it, as his girlfriend had kicked him out and he was sleeping on his cousin Yuri's sofa. Lacking restful sleep, he'd decided to ditch work that day, and take off to Atlantic City. Once there, he got drunk in a seaside bar, and when he woke up he discovered that he'd been shanghaied on a Norwegian freighter, carrying a load of bulk bauxite to Malta.

At first, he resented his duties; but soon he came to love life on the open seas, the rolling deck beneath his feet and the salt spray in his face. He remained on the ship for some time, drinking mojitos with pretty senoritas in Havanna; battling storms around Cape Horn and fighting pirates in the Sundam Straights. Eventually, however, the KGB caught up with him and he reluctantly accompanied them back to Moscow. Once back in the Kremlin, Nikita Khrushchev angrily informed Stalin that during his absence, the Korean War had been lost.

"What Korean War?" asked Stalin, causing to Khrushchev to do one of his trademark double takes. Then Stalin turned to the camera and winked. Iris out. Credits.

Truman then founded the CIA, which lead to severe increases in the planting and cultivation of pretty begonias. Yes, that's right, we even edit the stuff we censor. Mu hu hu hu ha ha ha!

Following his tumultuous presidency, Truman retired to his home state of Missouri, where he spent the next ten years building the Harry S. Truman Library. He then spent the remaining years of his life hanging out in the periodical section, occasionally badgering librarians to turn up the heat, and berating children for being too noisy. Sometimes, he'd call the only other living ex-president, Herbert Hoover, to check if Hoover was dead yet. Occasionally he'd call Kennedy to see if he needed any help at the office, only to be politely turned down. Truman would then sigh, and wander out into the yard to rake leaves.

1. ^  This was of course the correct answer, but unfortunately Truman wrote it on the cover of the question booklet, rather than inside the answer booklet as required.

7. ^  Asture readers will note that the bomb was of 16 kilotons, it was dropped in the daytime, not the night and it was dropped on Nagisaki, Japan rather than the capital of Chad. Historians suspect that these errors were due to Truman either being "tired" or else being "hepped up on goofballs".

Featured Article  (read another featured article)
Featured version: 23 May 2008
This article has been featured on the front page. — You can nominate your favourite articles at Uncyclopedia:VFH.