From Uncyclopedia, the content-free encyclopedia
(Redirected from Atlantic City)
Jump to navigation Jump to search

For the religious among us who choose to believe lies, the so-called experts at Wikipedia think they have an article about Atlantic City, New Jersey. 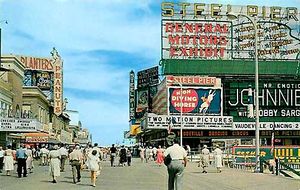 As you can see, it hasn't really changed all that much.

Atlantic City is a seaside resort town in the of the state of New Jersey. It is commonly referred to as "AC", "Camden By The Sea" or "Gomorrah With A 3 Drink Minimum And Valet Parking" by the natives.

Because of its proximity to some of the larger metropolitan areas of the United States, Atlantic City was once called the "America's Playground." This was not because people from all over the country went there for vacation. It was because the people from New York, Philadelphia and Washington, DC went there for vacation and everyone knows what assholes those people can be about the whole world revolving around them.

At one time it was a pretty cool place to hang out because of entertainers like the Rat Pack and Dizzy Gillespie played there regularly at cool old hotspots with names like the 500 Club and The Harlem Club. But in the 1960's and 1970's, as Las Vegas gained popularity, the cool factor went west with the entertainers leaving AC a burned out, rusting, crime-ridden shell.

With the introduction of Casino Gambling in 1979, Atlantic City has become a burned out, rusting, crime-ridden shell with about 12 casinos hugging the shoreline so as not to get too close to the shit on the rest of the island. The glitz and glamour of the casinos contrasted with the blight of the rest of the island has been described by some as "glitter on dogshit."

The daily influx of blue-haired pensioners on their Rotary Club-sponsored bus trips to the city eagerly attack the casinos in search of cheap buffets and a seat in front of one of the many nickel slot machines. After dark, it's a different story on the Casino floor. Hordes of Sopranos-wannabees, Guidos and Guidettes, whores, drunks and Asian Businessmen flock to the gaming tables in search of instant wealth and a shot at entries into Donald Trump's "100 Barcaloungers in 100 Hours" giveaway. And maybe even getting a glimpse of his famous Hair.

The current crop of entertainment consists of bands from the 1970's who haven't had a hit record in 35 years, but still have name recognition with the aging Baby Boomers who want to relive that summer in '75 when they saw Frampton come alive at JFK Stadium. Now they can see a somewhat less hirsute Frampton come alive in a smoky room with a 3 drink minimum and scantily clad cocktail waitresses. It's very much like a VH-1 "Where Are They Now" without the commercials for Enzyte.

Recent additions to the place are The Borgata and The House of Blues.

During the mid twentieth century, the massive Convention Hall contained the largest and loudest working pipe organ in the world, with eighty-seven manuals, sixteen pedalboards, 3 million stops, and over 33,000,000 pipes. It was vandalized, however, in the Worldwide Fight Against Pipe Organs sparked by The Vatican Marketing Department, and has been repeatedly attacked by some punk-ass kids since then. Popular Indie-rock band/pipe organ advocates Arcade Fire have since held several concerts in support of converting these punks to the Kingdom of Indie